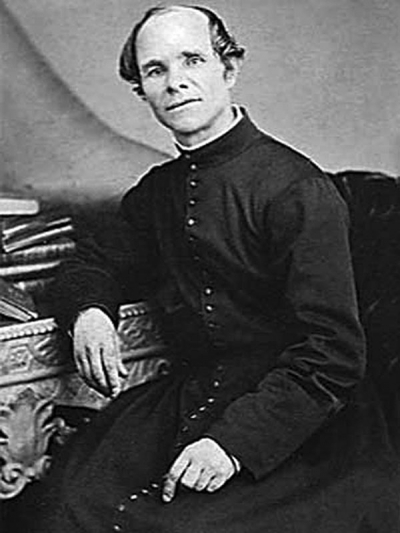 Russian Catholic Jesuit, archaeologist and missionary, opponent of the Russian Orthodox Church, who aimed to familiarize the Western reader with Orthodox history and culture. The most significant author and publisher, who wrote in French and Latin for Eastern Orthodoxy, and searched for valuable Slavic monuments.

He was born on October 7, 1821 in the town of Kazan into a lower-middle-class family. He studied philosophy in St Petersburg and graduated with gold honours in 1843. As a private person Martinov went to study in France, where he met Jesuit Xavier de Ravignan and on September 18, 1845, he applied for admission to the Jesuit Order. He continued his education in philosophy in Belgium and in theology in France. He was ordained a priest on September 20, 1851. Then Martinov studied Patristics in Paris (1852–1853) and settled in Versailles. He was condemned in absentia by the Russian authorities (1854) for ‘arbitrarily residing and enrolling in the Jesuit monastic order’ and thus virtually forbidden to return to Russia. In France, together with other compatriots such as Ivan Gagarin, Eugene Balabin and Pavel Pirling, he founded a Society of Jesuit Russians who continued their scientific studies on Russian history and Slavic culture. Martinov worked with Gagarin and Victor De Buck, a Belgian Catholic ecumenist, on the publication of volumes X/7 to X/13 of Acta Sanctorum (1854–1883), and the three left impressive correspondence during the gathering of information on ready-to-print texts. Despite spending most of his life abroad, Martinov maintained active correspondence with his Slavicist colleagues, such as N. P. Barsukov, A. N. Veselovski, P. P. Vyazemski, A. N. Pipin, F. I. Buslaev, I. I.Sreznevsky, F. I. Uspensky, and others. In the periodical Courrier russe he published in French the latest news from Russian cultural and scientific life. Ivan Martinov left behind a great number of polythematic works including over 50 articles, translations and monographs.

He dedicated himself to a written controversy with Eastern Orthodoxy with the idea to highlight the benefits of Catholicism, but at the same time he translated and published a number of Orthodox works in Latin, he wrote about the history of Orthodoxy in order to keep the West abreast with the Orthodox culture and for the needs of Catholics. Martinov was actively involved in religious journalism and archivism – he visited foreign libraries in which he searched for texts, which he translated and published with introductions and notes. He participated in the founding of the Saints Cyril and Methodius Society in Paris that was later closed along with other Jesuit organizations. Martinov was the founder of the Slavonic Library and published the Cyril and Methodius Collection (Vol. 1 in 1863 and Vol. 2 in 1867, Leipzig and St Petersburg). In 1870, he participated as an expert theologian in the First Vatican Council (1869–1870) and in 1883 was appointed a consultant to the Congregation for the Propagation of Faith in Eastern Affairs. Ivan Martinov died on April 26, 1894 in Cannes.

He translated into Latin the Vita of St John of Rila from the Russian old-printed Prolog in verse probably made between 1854 and 1858. This was the second in a row translation from Slavonic into Latin after the translation of the Vita of St Petka by Croatian Rafael Levakovich. Before the text of the vita itself, Martinov included a comprehensive commentary on the saint’s history, on the transfer of his relics, and on his place in Bulgarian and European history in view of the cult, giving explanations of the persons and events mentioned. He also made a partial translation of the Vita of St John of Rila, written by Patriarch Euthymios, but the published text was fragmentary and significantly abbreviated, presented in excerpts. Both vitae were published in Acta Sanctorum, Volume 9 in 1858.

Ivan Martinov was the author of Les Manuscrits Slaves de la Bibliothèque Impériale de Paris [The Slavic Manuscripts of the Royal Library of Paris] (1858) – a list of Slavic manuscripts from the Royal Library of Paris (today the French National Library) explaining the need to distinguish the Slavic language from Sanskrit and commenting on other problems that Slavic Studies were facing. He introduced the principles for the structure of the inventory, paying special attention to the nasal vowels and their importance and noting the differences between the different Slavic languages. Martinov emphasized that he was guided by the similarity of Czech inventories of Croatian Glagolitic monuments. His descriptions followed the same structure – number of folia, material – parchment or paper, handwriting (uncial, semi-uncial and cursive), dating and detailed content. Thus, a total of 29 manuscripts were described for the first time in France.

In 1863, Martinov translated into French the Vita of St Petka from the Prolog in verse – Sainte Parascève, previously translated into Latin and published nine years earlier in Volume 7 of the Acta Sanctorum, and supplemented it with notes and additional information on the relocation of the relics to Serbia, to Constantinople and finally to Iasi.

The 1863 Annus ecclesiasticus Graeco-Slavicus was one of Martinov’s most famous and prized works. Until the release of the Полный месяцеслов Востока of Archimandrite Sergius (1875–1876), the author’s book has been the most complete compendium on Orthodox hagiology, containing a detailed and critically elaborated account of the lives of the saints’ worshiped by all Orthodox churches, as well as those of Georgia, Bulgaria, Montenegro, Greece, as well as local Russian cults. In addition, it also included the memories recorded in early Cyrillic monuments from the 11th century onwards. Thus, it turned out that the first Orthodox Church calendar was not published in the language used by the Orthodox peoples, but in Latin, and in Western Europe. The next year issue was included in Volume 11 of Acta Sanctorum. Martinov provided additional information about the Vita of St Petka in Latin, and described the vita of the Rila hermit [St John of Rila], published by Neofit of Rila in 1836, along with his own translation of the Vita from the Prolog in verse.

Grammaire paléoslave: suivie de textes paléoslaves, tirés, pour la plupart, des manuscrits de la Bibliothèque Impériale de Paris et du Psautier de Bologne [Palaeo-Slavic grammar: followed by Palaeo-Slavic texts, mostly taken from the manuscripts of the Royal Library of Paris and the Bologna Psalter] is a guide to Old Bulgarian, including texts from manuscripts from the Royal Library of Paris and the Bologna Psalter. The edition was co-authored in 1869 but under the name of Alexander Hodzko. It included an overview of the state of the Slavic studies that were not yet well known to the French reader, as well as studies and publications of F. Miklosic’s and other Slavicists. The first chapter is devoted to the phonetics and dialect features of the Slavic languages, the second one deals with roots, the formation of the various verb forms, the types of declension types of nouns, adjectives, pronouns, as well as the conjugation of verbs. The whole grammatical system of Old Bulgarian is examined in detail and each unit is represented by a root and the various suffixes and endings were listed. The second part of the grammar contains an anthology of different texts, mostly taken from gospels and the Psalter, which provided an opportunity for exercise and for self-teaching.

Ivan Martinov was the discoverer of the Miscellany from Bdin and presented it to the public. He emphasized on the Bulgarian character of the monument, commissioned by Tsaritsa Ana –wife of Tsar Ivan Sratsimir (1356–1396) – who had a direct merit in its shaping. In 1882, he published parts of the miscellany (fragments from the vitae of St Marina and St Theophana) with an introduction in which he presented brief information about the contents of the manuscript.

Martinov also became involved in the controversy over the dating of the Italian legend with two studies (1884 and 1887), with which he proved convincingly its antique nature and that it was not related to Slavic sources and had unique features. Important to him has been the information provided by the residents of Kherson about the relics of St Clement of Rome, as well as the information that Constantine-Cyril had been ordained a bishop.

View the embedded image gallery online at:
https://sesdiva.eu/en/virtual-rooms/modern-authors/item/118-ivan-mikhailovich-martinov-en#sigProIda3bcd06d71
back to top