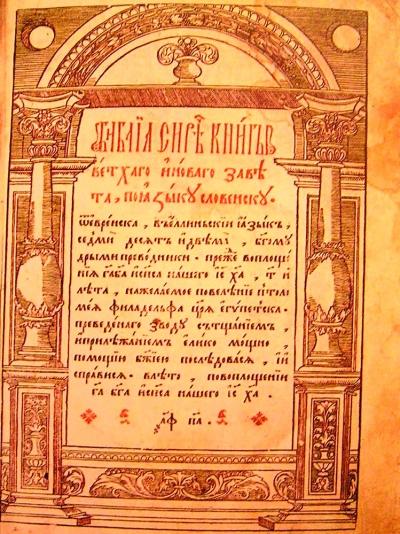 The Ostrog Bible, a cultural literary monument of global importance, was published in 1581 by the famous pioneering Russian and Ukrainian printer Ivan Fyodorov, in Ostrog at the estate of Prince Constantine of Ostrog.

In his publications the printer added the words “of Moscow,” i.e., he was a native of Moscow. A special printing house and a scholarly community consisting of a number of outstanding scribes of that time was established in Ostrog to issue the Bible. They did a tremendous job in preparing handwritten biblical texts for printing. Thanks to their efforts, the Ostrog Bible of 1581 became and still remains the most famous and significant incunabulum printed in Cyrillic. It summed up centuries of handwritten Church Slavonic translations of the Holy Scriptures. It not only completed the centuries-old history of creating a complete set of the books of the Bible, but also laid a new foundation for the perception of the text of the Holy Scriptures, which was the ideological and religious core of cultural tradition for many European peoples.

The preparation and publication of the Ostrog Bible wеre initiated by the magnate Constantine, Prince of Ostrog. In his city-estate he created one of the largest Orthodox cultural and educational centers in Europe, known in academia as the Ostrog Academy (it has now reopened in modern Ukraine as a national university). Members of the Orthodox scientific community in Ostrog maintained close ties with the Orthodox scholarly world from the Moscow state in the north to the Greek and Slavic centers of the south and west Europe. Ivan Fyodorov, who had already gained fame for his works outside the Moscow State in Podlashie (non-Polish territory under the Polish rule) and in the city of Lvov, was invited to Ostrog by the prince. After the decision to go ahead with publication was made, ambitious editorial work began involving a huge number of biblical texts in various languages: Greek, Latin, Czech and Polish. According to Prince Basil Constantine, he sent his people off to search for the necessary texts in many corners of Europe. However, the main literary treasure he managed to discover with Tsar Ivan the Terrible’s Moscow government was a list of the so-called Gennadios Bible of 1499. It was created at the order of the Novgorod Archbishop Gennadios and was the basis of the Ostrog edition of the Bible: “In all of the countries where Slavic languages are spoken, I searched for collections of the books of the Old Testament. Only from the pious and Orthodoxly devout monarch, the Grand Duke Ivan Vasilievich (Ivan the Terrible) of Moscow, with (the assistance of) a man chosen by God, Mikhail Garaburda, a scribe of the Grand Prince of Lithuania, was I honored to receive, after many entreaties, a complete and perfect copy of the Bible.” Many of the differences found between the translations of biblical texts were eliminated mainly by the representatives of the scholarly community. One of the foundations used was a variant of the Greek Bible and individual translations were made from the Latin text of the Holy Scriptures.

The work progressed relatively quickly despite its difficult and painstaking nature. Ivan Fyodorov, who was an excellent textual scholar and expert in the Church Slavonic language, also played a direct role in preparing the manuscript of the Ostrog Bible for printing. From the very beginning, the activities of the printers were conducted on a large scale. Ivan Fyodorov significantly expanded their team, prepared the necessary stocks of printing tools and paper for printing such a voluminous edition. He defined the strategy of publishing the Ostrog Bible, set the work pace, planned out the composition, graphics and typefaces of the book.

For the title page of the Ostrog Bible, Ivan Fyodorov used the frame of the frontispiece of The Apostle, which he printed in Moscow and Lvov in 1564 and 1574 respectively. On the other side of the title page he placed the coat of arms of Prince Constantine of Ostrog and verses on this coat of arms. On the next page begins a foreword on behalf of the Prince, written both in Greek and Church Slavonic. Then follows the foreword of the rector of the Ostrog Academy, Gerasim Smotritsky, and his poems addressed to the reader. On a separate sheet, there is the table of contents of the Bible and then there is its text, at the end of which are placed so-called lecture tables with a directory of the Gospel readings for each month of the year and the afterword of Ivan Fyodorov in the Greek and Church Slavonic languages and his printer’s mark with his name.

The Ostrog Bible was typed in four Cyrillic and two Greek fonts. The primary one of them was a small Cyrillic letter reminiscent of the drawing in manuscripts that were then created in the Eastern Slavic lands of the Polish Commonwealth. The book was printed in two colors: predominantly black and red. It uses initials, headpieces, tailpieces, ornamental script and a variety of patterned decorations in it. The entire book has 628 sheets or 1,256 pages of large format (“per sheet”). On its full pages, there are 50 rows in two parallel columns. To date, about 400 copies of the Ostrog Bible are known, but every year previously unaccounted for copies are found. This book is distributed around the world, with most of the copies in Russia and Ukraine, followed by Serbia, Poland, Great Britain, Bulgaria and other countries.

Due to a high demand, in 1663 the Ostrog Bible was reprinted in Moscow. This reissue was a kind of turning point for subsequent publications of the Bible, not only in Russia but also outside it. For Russian Old Believers, the Ostrog Bible remains one of the major holy books to this day; in 1914 they reprinted it in Moscow. In modern times, the Ostrog Bible has been reprinted, including for purely academic purposes. Electronic versions of individual original copies of the Ostrog Bible are now publicly available, but it itself has still not been sufficiently studied, especially by philologists. As the Ukrainian academic Ivan Francopointed out a century ago, the Ostrog 's Bible “in terms of its editing and its sources... Was not investigated in detail.”

View the embedded image gallery online at:
https://sesdiva.eu/en/virtual-rooms/cultural-exchange/item/193-ostrog-bible-en#sigProId0639f3e0ad
back to top