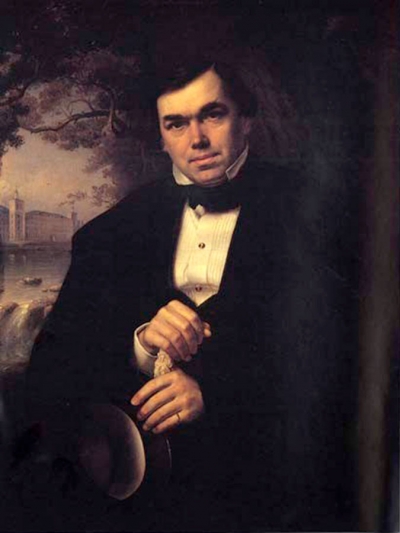 He was born in Moscow as one of the six sons of Ivan Khludov, an Old Believer, and a well-known textile manufacturer. After the death of his father in 1834, the business passed into the hands of A. Khludov and three of his brothers. In the years 1845 to 1873, they founded a number of thriving businesses and emerged as significant industrialists. During these years, Khludov devoted a great deal of time and resources to social and charitable activity – he was a member of the Moscow Commercial Court, an honorary member of the Board of the Trade School, first chairman of the Moscow Stock Exchange Committee, a leader of the Moscow Commercial Council, one of the founders of the Moscow Art and Industrial Museum. In addition to this activity, he supported schools, hospitals, homes for the elderly, and churches. Khludov was a member of the Moscow Archaeological Society and one of the founders of the Rumyantsev Museum in Moscow, whose work he has repeatedly supported. He was awarded the Order of St Vladimir, 3rd degree. In 1874, he retired from his entrepreneurial activity and devoted himself to his passion for collecting.

Without systematic education, but endowed with great abilities, A. Khludov educated himself. A staunch Old Believer, he was interested in the Old Slavic medieval heritage, drawing his attention mainly to the Old Believers’ manuscripts, the first printed books before the reform of Patriarch Nikon of Moscow, and the monuments of old Russian literature. In 1860, he acquired the collection of the Old Believer A. N. Ozersky, which marked the beginning of his collection. Soon Khludov became a famous collector of manuscripts, old books and icons in Moscow. He managed to buy two more significant collections – of merchant A. I. Lobkov and of ethnographer and folklorist A. F. Gilferding. In his collector’s activities he regularly used the services of famous Moscow bookstores, relying also on his personal librarian, the Old Believer I. V. Borisov.

The collection of manuscripts and old-printed books of Alexey Khludov was described on his instruction by historian A. Popov in 1872. A little later, in 1875, the First Supplement to his inventory was printed. Unfortunately, the Second Supplement prepared by M. N. Speranski remained unpublished.

According to the 1872 inventory, Khludov owned 361 manuscripts and 575 old-printed books from the 15th–19th centuries. The manuscripts from the collection were grouped in eight sections: 1) Books of the Holy Scripture; 2) Interpretations of the Holy Scripture; 3) Works by the Fathers of the Church; 4) Canon Law; 5) Theological writings; 6) Liturgical books; 7) Church-historical and literary works; 8) Polemical writings related to the schism in the Russian Church. The old-printed books of the Khludov collection – the Krakow, Prague, Venetian and early Russian editions – are a valuable testimony to the beginning of Slavic printing. In general, however, the main value of the collection is the so-called Khludov Psalter, a lavishly illustrated Greek manuscript from the mid-9th century. It was brought by the famous Slavicist V. I. Grigorovich from his trip to the Balkans in 1844–1847, and Khludov acquired it as part of Lobkov’s collection. Towards the end of A. Khludov’s life, the manuscripts in his collection numbered 624 and the old-printed books were 717.

Khludov’s library was kept in his home, in a specially constructed, fire-proof hall whose ceiling was painted by famous Russian artist V. M. Vasnetsov. Although not public, the library was publicly accessible at that time. According to the owner’s will, after his death in 1882 it was handed over to the (Old Believers’) Monastery of St Nicholas in Moscow. Immediately thereafter, according to the will, the manuscripts and books of the collection were submitted for reading and study. In 1917, they were transferred to the State History Museum in Moscow, where, with few exceptions, they are kept to this day.

View the embedded image gallery online at:
https://sesdiva.eu/en/virtual-rooms/collectors-and-collections/item/141-aleksey-ivanovich-kkhludov-en#sigProId3c070048c4
back to top