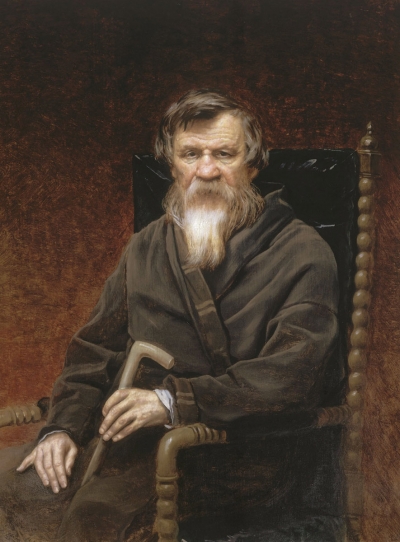 He was born in Moscow, where he finished high school and the Language branch at Moscow University, and he defended his master’s thesis on the theme ‘On the origin of Russia’, in support of the so-called Norman theory (1825). Pogodin was Secretary (1825) and Chairperson (1860 – 1866) at the Society of the Fans of Russian Language; Member (1825), Secretary and Chairperson at the Society for Russian History and Antiquity (1875); Chairman of Moscow Slavic Charity Committee (1861) – the organization whose activity was connected with Slavdom and the Pan-Slavic idea. From 1825, he was a lecturer at the Department of Russian History at Moscow University, where he was later a professor (1833) and Head of the Department (1835 – 1844).

While still a student, Pogodin showed a scientific interest in early Slavic cultural history. He translated into Russian the book of J. Dobrovsky, dedicated to Cyril and Methodius, in an annex to which he published the Alphabet Prayer he had discovered (1825); another translation was the first volume of Dobrovsky's Old Slavic Grammar (1833). Over the decades to come, he undertook a number of trips round Russia, Europe and the Middle East, during which he visited university centres, libraries and monasteries and became acquainted with the works of Russian and foreign Slavicists. In 1844, he gave up his academic career, but until the end of his life was engaged in the study of medieval Russian and Slavic history and literature, and published thematic magazines and brochures. Pogodin was particularly interested in the life and work of Sts Cyril and Methodius and on the occasion of the 1000th anniversary of the Slavic alphabet he published a jubilee scientific collection (1865), in which important sources about Cyril and Methodist appeared for the first time along with scientifically valuable studies of prominent Russian Slavicists.

Not a few books related to Slavic history and philology were published in Russia with the support of Pogodin. He assisted with ideas and materials the researches of prominent Russian Slavicists such as P. S. Bilyarski, A. F Bichkov, O. M. Bodyanski, Yu. I. Venelin, V. I. Grigorovich, N. S. Tikhonravov, V. M. Undolski, et al. The extensive correspondence he maintained with famous European scholars like J. Kollar, J. Kopitar, P. Miklosic, V. Karadzic, P. Safarik and others, contains valuable information on the history of Slavic studies. He was in close contact with the Bulgarian Revival Period figures Nayden Gerov, Sava Filaretov, Spiridon Palauzov, Rayko Zhinzifov, to mention but a few. He was interested in the Bulgarian colony in Odessa and his articles on the life of the Bulgarians in the Ottoman Empire appeared in the Moskvityanin Newspaper.

Pogodin is also known for his remarkable collection of manuscripts, old-printed books and other historical pieces – icons, coins, prints, engravings, vessels, seals and more. He gathered his collection during his trips round Russia and abroad – in the North Russian and Balkan monasteries, in Kiev, Odessa, Lviv, Vienna, Pest, Belgrade, etc., where he bought or exchanged new Russian editions of liturgical books for manuscripts and old-printed books. His effort over several decades resulted in the accumulation of more than 2000 manuscripts and 800 old-printed books that attracted the attention of many scholars who have opened a wide field to their studies of medieval Slavonic literary languages and literatures. For Pogodin and the scientists in his circle, the manuscripts of the collection were not only the subject of a collector’s passion, but also resources through the study of which Russian researchers proved their interest in Slavs (Ivanova 1981: 11–12). In 1852, the collection of M. Pogodin was bought by Emperor Nicholas I for the Russian state, with the manuscripts and the old-printed books being handed over to the Public Library (present-day Russian National Library) in St Petersburg, where they are kept to this day.

View the embedded image gallery online at:
https://sesdiva.eu/en/virtual-rooms/collectors-and-collections/item/81-mihail-petrovich-pogodin-en#sigProId4f6b917bd3
back to top