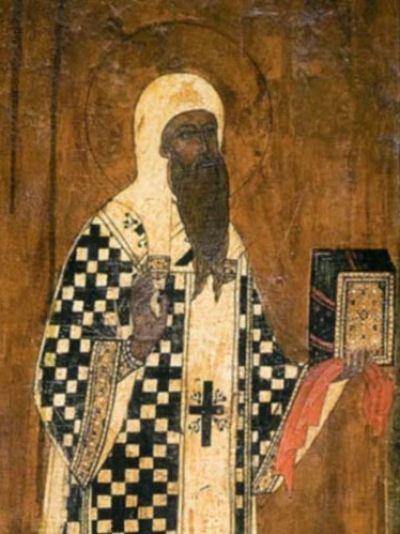 A saint, Bulgarian and Russian writer, cleric, major intellectual from hesychast circles at the end of the 14th and the beginning of the 15th century, supporter of the unity of the Russian church, Metropolitan of Kiev, Moscow and all Russia.

Quite little is known about the early years of Cyprian. It is assumed he was born c. 1330 in the Bulgarian capital of Turnovo where he received good education. The question of his belonging to the aristocratic Tsamblak family (with branches in both Bulgaria and Byzantium) is dubious. The grounds are the note of Gregory Tsamblak in his Eulogy of Cyprian, where he says that Cyprian is a brother of his father. However, the expression can be interpreted both literally – i.e. that Cyprian was his nephew – and alternatively to underscore his spiritual link to the Patriarch of Turnovo, Euthymius (1375–1393) (Holthusen 1968; Дончева-Панайотова 1981: 52–62; Оболенский 1998: 528–529; Thomson 2005: 525). Because of the lack of individual indications, the sojourn of Cyrpian in one of the most hesychast centres, that of Theodosius of Turnovo, is also questionable because of the lack of indications in the sources. It is usually assumed that Cyprian and Euthymius were among the closest and most talented pupils of the Turnovo saint who accompanied him to Constantinople in 1363. It is assumed that after the death of their teacher, the two went to Mt. Athos, where Cyprian remained for some ten years (Дончева-Панайотова 1981: 63–66). The letter of Patriarch Euthymius “to monk Cyprian, residing on Mt. Athos” containing answers to typikon questions, was most probably addressed to him (Оболенский 1998: 529; Кенанов 1988).

The first definitive information about Cyprian dates from 1373, when, upon returning to Constantinople, he became a part of the entourage of the Ecumenical Patriarch Philotheos Kokkinos (1353–1355, 1374–1376). As one of his trusted retinue, he was commissioned with a number of missions. In 1374–1375 he was sent as the head of the patriarchal embassy to the Grand Duchy of Lithuania and the Grand Duchy of Moscow with the task to negotiate peace between the already very elderly Russian Metropolitan Alexis (1354–1378) and the Grand Duke of Lithuania and Tver, so that the united Russian church could support the resistance of Orthodox Slavs against the increasing Ottoman threat. Meanwhile, Cyprian was anointed as Metropolitan of Kiev and Lithuania by Patriarch Philotheus (at that time Kiev was in the territory of the Grand Duchy of Lituania, on the condition that, after the demise of Metropolitan Alexis, Cyprian would become the sole head of the Church of All Russia. This, however, proved quite difficult as the Grand Prince of Moscow, Dmitry Donskoy (1359–1389), wanted to break with the tradition of Russian metropolitans being chosen and imposed by Byzantium and tried to appoint to this position his confessor, Michael (Mitjay). Michael died on the way to Constantinople where he was sent to request the approval of the patriarchate in 1379, and the Russian envoys accompanying him managed to convince the new Ecumenical Patriarch Nilus (1379–1388) to appoint Archimandrite Pimen as Metropolitan of Moscow and all Russia, while the Lithuanian Orthodox eparchies remained under the jurisdiction of Cyprian.

Even before the decision of the synod in 1380 Cyprian, who was being humiliated and subject to humiliation and harassment by Dmitry Donskoy, headed to the Byzantine capital to seek support, passing through Romanian and Bulgarian lands. In the beginning of 1379 he was welcomed solemnly by his associate, Patriarch Euthymius, an event that was described in detail by Gregory Tsamblak. Cyprian’s struggle for the see of Moscow and was supported by influential hesychast monks in Constantinople and Moscow, and in the spring of 1381 he was invited to head it. This, however, was not the end of his trithe als and tribulations. After he fled from Moscow at the siege in 1383 by the Tartars and went to Tver, Cyprian was expelled from the city and was forced to find refuge in Kiev again. It was only in 1389 that he was finally pronounced Metropolitan of All Russia and the fragmented Russian lands were united under his scepter. Cyprian held this position until his death. As the head of the Russian Orthodox Church, Cyprian was an active participant in spiritual and cultural life, maintained close relations with prominent representatives of the Russian clerics, such as the abbot of the Holy Trinity-St.Sergius Lavra, Sergius of Radonezh, and the abbot of the Simon monastery, Theodore, made a number of reforms and engaged in literary activity. He died on September 16, 1406, and was buried at the Dormition cathedral in the Kremlin, Moscow. He was canonized as a saint by the Russian Orthodox Church. He is commemorated on May 27/June 9 and on September 16/29.

The reforms of Cyprian in the Russian Orthodox Church were largely inspired by the liturgical reform of Patriarch Philotheos Kokkinos in Byzantium, which Athonite and Turnovo scribes spread in the Balkan Slav countries, including his friend and associate Patriarch Euthymius (Дмитриев 1963; Дончева-Панайотова 1981: 113–161). The name of Cyprian is associated with the early period of the so-called Second South Slavic Influence in Russia – the penetration of new or changed according to the requirements of Athonite-Turnovo redactors of biblical and ascetic translations, as well as such associated with hesychast ones. Cyprian himself translated the canons and prayers of Patriarch Philotheos, and probably also the Diataxis he compiled. He contributed considerably to the transition from the Studite to the Jerusalem typikon in Russia to “straighten” the liturgical repertoire by the introduction of new redactions of the Service Book, the Euchologion and the Psalter, although his personal role in the creation and the origin of the antergraphs is subject to further specification (Желтов 2014; Турилов 2014; Афанасьева 2016). At the time of Cyprian – and probably with his participation – the Russian chronicles were redacted and complemented (the so-called Chronicles of 1408), a redaction of laws in Kormchaia Book, the distribution of the Euthymius redaction of the Synodikon, as well as a special compendium of letter forms (borrowed from the Patriarchate of Turnovo or translated from Greek) for correspondence with high-ranking church and lay officials, as well as a List of Russian Cities, Far and Wide (Турилов 2014). Cyprian is also ascribed the compilation of an extended version of the Index of Forbidden Books, probably a citation of the so-called Cyprian Euchologium (Кобяк 1984, 1997).

Numerous marginal notes in codices from the end of the 14th through the 16th century associate their inception, holding or original source with the translation and copy work of Cyprian. Among these, his only definite autograph is that in the so-called Ladder of Paradise of Cyprian (Russian State Library, МДА, f. 173. I, No. 152), wriatten in typical Graecisied South Slavic semi-uncial (Letter of Father Gerasimos) and containing a note in his own hand that the book was written by him in the Studite monastery in 1387. The so-called Psalter of Cyprian with order of service (Russian State Library, МДА, f.. 173. I, No. 142), which the marginal note calls “letter of Cyprian”where the menologion includes South Slav saints, is dated according to watermarks in the second or the third quarter of the 15th century, while the Service Book of Cyprian (State Historical Museum, Син. 601) is written in traditional Russian orthography – i.e. both manuscripts probably originated from earlier originals that have not reached us and reveal how broad the literary and reformist ambitions of Cyprian were. The initial stage of their distribution, as well as that of other compilations in which Cyprian had a key role, could be related to the literary circle acting around the enlightener, which made a considerable contribution to the distribution and popularisation of the new texts and books in Russia (Князевская, Чешко 1980; Афанасьева и др. 2015; Афанасьева 2016).

Charters, personal letters and correspondence on personal and official matters (including Sergei of Radonezh, Theodore of Rostov, Athanasiu Visotsky and others), to the clergy and the entire congregation, are evidence of the scope of Cyprian’s work as a prominent public and church figure. They are important as historical documents with religious and ecclesiastic content, as well as literary works, although they frequently reveal lexical and syntactic simplicity, closeness to dialogical form, concreteness and lack of rhetoric adornments. The well-known Farewell of Cyprian, which he dictated four days before his date and was read at his funeral, became an example for such metropolitan legacies in Russian literature, was included in a number of chronicle collections, as well as in the Festal Menaion of Metropolitan Makarios (Дмитриев 1963: 228–235; Турилов 2014).

The most widespread works of Cyprian included a cycle of works such as the Extended Vita, Laudation, Service and Canon dedicated to the first Metropolitan of Moscow and All Russia, Peter, (who died in 1326), and preserved in a number of copies. Cyprian had several aims when he focused on the cult (of local significance) of his predecessor who had a similar fate. Cyprian underscored the significance of his throne, consolidated his position and distributed his ideas about his ideas of relations between clerical and lay authorities (Дмитриев 1963: 236–254; Дончева-Панайотова 1981: 162–207; Ангушева 2008; 586–587). Another two works are ascribed to Cyprian relevant to his rivals for the throne of metropolitan of Muskovy – the pamphlet Story about Mityai and the Story about Metropolitan Alexius.

A Laudatum by Gregory Tsamblak compiled in 1409, a 16th century vita titled Short Story about the Wise Cyprian, Metropolitan of Kiev and All Russia, preserved in several variants, as well as a Story about the Demise of Cyprian (also in different versions, included in a number of Russian chronicles). His depiction as a saint on icons and miniatures began in the 17th century.

View the embedded image gallery online at:
https://sesdiva.eu/en/virtual-rooms/popular-saints/item/188-cyprian-metropolitan-of-kiev#sigProId688c34f190
back to top