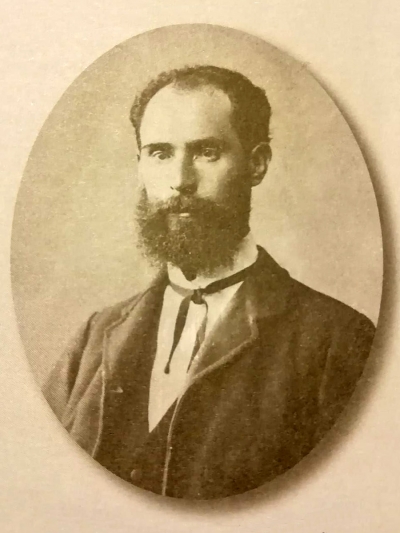 Dimitar N. Blagoev was born in Samokov in a family in need. He studied for a while in Bucharest (until 1859), but after his father died, he left for Odessa, where, with the support of the Odessa Bulgarian Board of Trustees, he began studying at the Seminary. He graduated in 1865. At the expense of the South Slavic Charity Educational Society, he studied at the Kiev Theological Academy, which he graduated in 1869. He defended his diploma thesis on Исторический очерк воспитания у болгар за последнее столетие [Historical Outline of the Upbringing of Bulgarians for the Last Century] which is kept at the Central library of Ukraine Academy of Sciences Department of Manuscripts, thesis No.449). With his high erudition and awareness, as well as his attitude towards the Bulgarian cultural history, in his first work D. Blagoev commented on the modern trends in education, literature and culture. He developed his ideas about modern education, the role of teaching aids, and the principles of teaching.

Exploring almost 100 years of the Bulgarian literary development, he raised the question of the beginning of Bulgarian Revival, situating it at the end of the 18th century. D. Blagoev was the first Bulgarian in the 19th century, who in his diploma work in the same 1869 periodized the Bulgarian cultural development and education by differentiating two periods: 1st period until the 1830s, and 2nd period until the 1860s. In the periods he traced the various stages of education, praised Dr P. Beron’s Fish Primer and his role in the introduction of the modern Bulgarian education, emphasizing on the book’s basic quality of being written in ‘smooth, easy to understand Bulgarian language’. With his rich awareness of the development of the academic work, and knowledge of the textbooks and teaching aids heretofore published, D. Blagoev focused on the textbooks and grammars of Hristaki Pavlovich, Neofit of Rila, Rayno Popovich, Ivan Bogorov, Sava Dobroplodni and others. For almost a year and a half, at the recommendation of the Odessa Board of Trustees, he worked as a teacher in Comrat – a Bulgarian settlement in Bessarabia – where he taught Bulgarian language and geography. His friend was Vasil I. Diamandiev, also a teacher in Comrat and a future major figure in Bulgarian cultural history. D. Blagoev returned briefly to Samokov, but did not accept the offer of Samokov elders to settle in his hometown. He accepted the invitation of Plovdiv elders and moved to Plovdiv as a teacher, and later director of Plovdiv High School (1871–1875). With his activity as a teacher and expert in pedagogy, and with his modern views on Bulgarian education, D. Blagoev made the city of Plovdiv one of the leading pedagogical centers of Bulgarian education.

Dimitar N. Blagoev first introduced pedagogy as a special subject in Bulgarian education and was the first teacher of pedagogy in the sixth grade, newly opened in 1872. On his idea, a student society was formed at Plovdiv High School. He also received high recognition for his work – in 1871 he was elected a Corresponding Member of the Bulgarian Literary Society (today Bulgarian Academy of Sciences).

The first in Bulgarian schools to apply the ‘vocal method’ already popular in European educational institutions were Russian graduates Yordan Kovachev in 1868 at Gabrovo School, Raycho Karolev in 1871 in Gabrovo, and Dimitar N. Blagoev in 1871 in Plovdiv. D. Blagoev’s interests in this method at the time of his studies at the Kiev Theological Academy and his desire to study and apply it, were documented by one of the 19th-century researchers of Bulgarian-Russian relations, K. Poglubko, a descendant of a Bessarabian Bulgarian. Later, Makedonia newspaper noted that D. Blagoev was introducing it in the classes of the mutual-teaching [Bell-Lancaster method] school opened at Plovdiv High School. In order to acquaint the teachers this new method of teaching, D. Blagoev started teachers’ summer gatherings, where he introduced them in detail to its peculiarities.

D. Blagoev looked after the wide understanding and introduction of the vocal method by publishing the Буквар по нагледна и гласна метода [Primer on visual and vocal method] and methodological guidance for its teaching. In the preface Изяснение на Букваря по „нагледно-гласната метода“ [Explanation of the Primer on the visual-vocal method], which was published in 1874, he also disclosed the sources he used: ‘the newly published books on this topic in Russian and Czech languages, facilitated me a lot, mostly the Visual Alphabet Primer (p. 4)’. The merits of D. Blagoev for the uplift of the educational work in Plovdiv, for the publication of his Primer, for all his active pedagogical and educational activities were highly appreciated by his contemporaries. There were rave reviews in authoritative editions such as Napredak magazine, Makedonia newspaper (1871), Pravo newspaper (1872), journal Knigovishte za prochitane, Slavyani newspaper. Periodical Journal, the publication of the Bulgarian Literary Society, recommended that teachers ‘make good use of the excellent Primer by Blagoev’ (1874, No 9-10, p. 203). Napredak newspaper in its issue No 53 of 1875 announced the decision of Plovdiv Teachers’ Council of 1874 to introduce this Primer in the initial education of children, instead of ‘the current Primer based on the vocal method, 1873, by Manchov’ thus endorsing the Primer as major teaching aid.

Dimitar N. Blagoev’s Primer underwent 20 editions, and was included in the 1890 edition of Uchilishten pregled journal, in the List of Textbooks Allowed for Use in Bulgarian Schools. According to M. Stoyanov, in Sacred History (1873, translated from Russian), Hristo P. Markov reportеd that D. Blagoev had translated and submitted a book, Свещена история [Sacred History]. He was also reported to have authored a textbook on geography, and in 1872, with the help of N. Gerov, requested books of religious content from the Kiev Theological Academy to be taught in Bulgarian schools. Materials for Dimitar N. Blagoev are stored in National Library SS Cyril and Methodius, Bulgarian Historial Archive, ф. 577, а. е. 1, л.85–87; ф. 9, а.е.II A 8465, л. 1.

View the embedded image gallery online at:
https://sesdiva.eu/en/virtual-rooms/national-revival-of-slavs/item/136-dimitar-nikolov-blagoev-en#sigProIdf03118e9f0
back to top