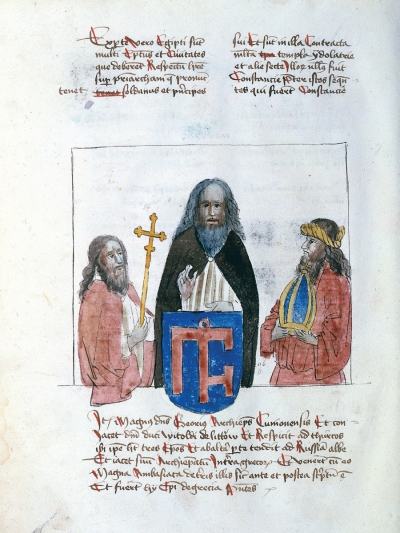 Gregory Tsamblak was born in the Bulgarian capital of Tarnovo around 1364/1365. He descended from a noble Wallachian family whose representatives have played a significant role in the history of Byzantium, Bulgaria and Serbia. He is supposed to have been related to Metropolitan Cyprian (Дончева-Панайотова 1978, Дончева-Панайотова 2004: 212–215). His date of birth is estimated on the basis of his Funeral Oration for Metropolitan Cyprian, where the author reported that at the time when Cyprian visited Tarnovo (1379), he was a young man (Спасова 1998, Thomson 1998). Gregory Tsamblak became a monk and received his education in the circle of Patriarch Euthymius, in the centre of the cultural life in Bulgaria at that time. He probably lived for some time at Mount Athos, where he adopted the religious tenets of Hesychasm (Дончева-Панайотова 2004: 128–130). It is not known whether he was in Tarnovo during the siege and fall of the capital of the Second Bulgarian Empire under Ottoman rule (1393), and also whether he resided in Bachkovo Monastery. Biographical data about Gregory Tsamlak is quite sparse hence many of his biographical points are debatable – for example, the period when he worked in Serbia as Father Superior of the Decani Monastery (whether it was before or after the mission in Moldova), the time when he was in Constantinople, and not a few other travels of his.

Probably Gregory Tsamblak was sent to Serbia with a diplomatic assignment by the Patriarch of Constantinople and became Father Superior of one of the most important Serbian monasteries, in the heart of the Serbian Patriarchate, near Pec. This probably happened between 1397 and 1398, after the defeat of Vuk Brankovic near Nikopol and before 1402.

In the title of the Vita of Stefan Decani, it is said that Gregory (monk and presbyter) was Father Superior of the Decani Monastery. According to J. S. Radojčić (Дж. Сп. Радойчич 1963: 175–182) the referred events were from the early 15th century, or more precisely, the period 1402–1404, after the Battle of Angora, when the heirs of Vuk Brankovic (Mara and their sons, Grgur and George) tried to reclaim the lost lands in South Serbia with Turkish aid. At that time, Despot Stefan Lazarevic restored friendly terms with the Brankovic, but in the text of Gregory Tsamblak there is no hint of the Lazarevic. Therefore, the arguments of Radojcic are considered unacceptable and it is more likely that Gregory Tsamblak had worked in Serbia at the very end of the 14th century rather than at the early 15th century (Петровић 1984, Thomson 1998: 37–51, Дончева-Панайотова 2004: 132–134). In addition, the lack of information about Sultan Bayezid in the Разказа за пренасяне на мощите на света Петка от Търново и Видин в Сърбия [Homily about the transfer of the relics of St Petka from Tarnovo and Vidin to Serbia] is indirect evidence that the text was written before the Battle of Angora in 1402.

It is known that in 1401 the Ecumenical Patriarchate decided to send Gregory Tsamblak to Moldavia and he went there in 1402. He was sent on a diplomatic mission to Suceava and subsequently remained there as a Presbyter of the Church of Moldavia and Wallachia (in the Cathedral Church in the capital city). There he created not a few eulogies and sermons, Пространно житие и Служба за мъченика Йоан Нови Сучавски [Extended Vita and Office for Martyr Joan Novi of Suceava].

In 1406, Metropolitan Cyprian summoned him to Moscow, but on the way, Gregory Tsamblak learned about his death and for some time remained in the Grand Duchy of Lithuania (Thomson 1998: 52–54). Three years later, Gregory Tsamblak pronounced the Funeral Oration for Metropolitan Cyprian (the text is dated to 1409 based on a mention that it had been 30 years since the visit of Metropolitan Cyprian to Tarnovo in 1379) and this act was related to the arrival from Byzantium of the new head of the Russian Church, Metropolitan Photius. It has been argued exactly where the oration was pronounced – in Vilnius, in Kiev or in Moscow (Thomson 1998: 54–56; Дончева-Панайотова 2004: 204–206).

During the first decade of the 15th century, Gregory Tsamblak became involved in the struggle to re-establish the Metropolitan’s See of Kiev as centre of ecclesiastical authority in Russia. In 1414, he went to Constantinople with a proposal from the Grand Duke of Lithuania to be appointed head of the Kiev Department thus creating a scandal because he split into the Russian church (he was anathemized by Metropolitan Photius of Moscow and by the Patriarch of Constantinople). However, Tsamblak was appointed to the Kiev metropolitan’s throne by the Council of Bishops in 1415. The Patriarch of Constantinople Joseph (appointed to the throne in 1416) subsequently acknowledged the election of Gregory Tsamblak as metropolitan (according to a late Ukrainian chronicle). This event triggered the autocephaly of the Russian Church in the mid-15th century.

After being elected Metropolitan of West Russia, Gregory Tsamblak set out to legalize the act and at the same time expand his diocese. He proclaimed himself Metropolitan of Kiev and All Russ’ (Дончева-Панайотова 2004: 59). Probably by the time he has been a metropolitan, he prepared a compilation of the teachings called Книга на Григорий Цамблак [Book of Gregory Zamblak] with 18 authored homilies dedicated to the feast days in the Orthodox calendar. At the same time, he established in the diocese of the West Russian metropolitan the cult of the revered St Petka of Tarnovo (St Paraskeva of the Balkans), honoured in Romania, Serbia and Bulgaria, since the time of Metropolitan Cyprian. All East Slavic transcripts of the Vita of St Petka with the Homily about the transfer of her relics, written by Gregory Tsamblak, show Serbian mediation because they contain a prayer for Despot George Brankovic (Турилов 2001: 260–261, 269 and note 41).

It is known that in 1418 Gregory Tsamblak participated in the Church Council in Constance (Germany), where the union between the two Christian churches was discussed, but there is no convincing evidence that he was a supporter of that union (Първев, Банев 1982: 124). A number of Russian chronicles report that after the council, Gregory Tsamblak returned to Lithuania and died in the winter of 1419 or 1420 in Kiev.

Gregory Tsamblak was a contradictory personality, a cosmopolitan in the inter-Slavic and the inter-Balkan environment. He was one of the most prolific and popular authors of the Orthodox world in the 14th and 15th centuries. Author of vitae – extended and from the Synaxarion, and related offices for the martyrs Stefan of Dechani and John the New of Suceava; Homily about the transfer of the relics of St Petka (presumably and a Office for her – Кожухаров 2004: 180–181); two encomia (for Patriarch Euthymius and for Metropolitan Cyprian); an Epistle to the Grand Duke of Tver, Yoan Mikhailovich; and two welcome speeches (to Pope Martin V and to the Fathers of the Council of Constance). As an educated man-of-letters, author of many works, he remained in the history of four literatures – Bulgarian (Eulogy for Patriarch Euthymius, Homily about the transfer of the relics of St Petka of Tarnovo), Serbian (Vita and Office for Stefan of Decani), the Russian (Funeral oration for Metropolitan Cyprian) and the Romanian (Extended vita and Office of Martyr John the New of Suceava).

The major part of the literary heritage of Gregory Tsamblak consisted of eulogies and homilies for the triodion and menaion church cycles, sermons for the monastic life – over 25 sermons and homilies (Бегунов 1978: 318–319, Бегунов 2005, Дончева-Панайотова 2004: 304–306). A number of anonymous works, individual interpretations of the Psalter in West Russian manuscripts and extracts from its texts, bearing the name Gregory, belonging to the following centuries, are also attributed to his works.

As author Gregory Tsamblak has referred to himself with various monastic ranks, depending on the relevant period of his life (monk, hieromonk, presbyter, father superior, archbishop, and metropolitan) and this fact contributed to the dating and localisation of his works. As a church preacher, he adhered to the stylistics of the Tarnovo Literary School of the second half of the 14th century, typical for his teacher Patriarch Euthymius. As a highly educated writer, he was well-versed in Greek and Slavic literature, in the works of the Holy Fathers, and in the texts on local Slavic saints, which he often used as his models (Наумов 1984, Кенанов 1984, Кенанов 1994, Ангушева-Тиханова 2001, Angusheva-Tihanova 2004). As a diplomat and a priest, he fully adapted himself to the interests of the country in which he worked – Serbian hagiographer or founder of the Slavic-Moldavian literature. His ability to work in any geographical area of Orthodox Slavic culture led him to the idea of a united community of Orthodox Slavs. As a hymnologist, he revived the acrostic (in the offices for Stefan of Decani and John the New of Suceava).

Gregory Tsamblak’s entire work is preserved in hundreds of transcripts from the 16th–17th centuries, which testify to the connection between Slavic and Moldavian–Wallachian literatures (Турилов 1982). His collection of his own works was widespread – more than 10 transcripts from the 15th–17th centuries are known (Дончева-Панайотова 2004: 246–281). Most of his writings for calendar liturgical use were included in Makari’s reading menaia (Казакевич 1982). Numerous versions and adaptations of his hagiographic, rhetorical and hymnographic works in Russian literature are preserved.

Grigory Zamblak’s writings appeared in the first printed books relatively early – Bojidar Vukovic included in the printed in Venice (1536–1538) Festive Menaion Tsamblak’s Office for Stefan of Dechani, while the Suffering of John the New of Suceava was translated into Romanian by Metroplitan Varlaam and published in 1643 in Yasi in the composition of the Tarzhestvenik (Петков 1984).

The vitae written by Gregory Tsamblak exerted an impact on the iconography in Romania (Бакалова 1991) and Serbia (Шакота 1965, Ђурић 1985) alike.

View the embedded image gallery online at:
https://sesdiva.eu/en/virtual-rooms/popular-saints/item/132-gregory-tsamblak-en#sigProIdb3b42055c6
back to top