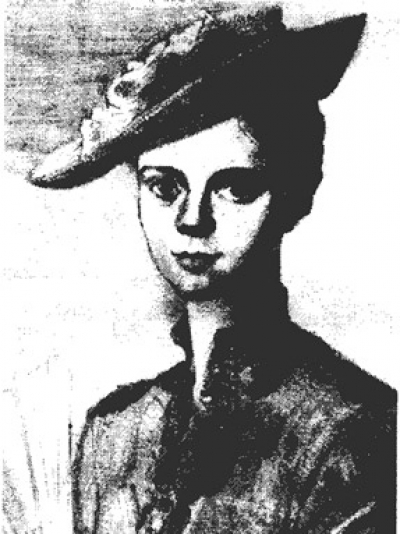 Described as the first folklorist, translator and poetess during the Bulgarian Revival Period. One of the outstanding representatives of the Bulgarian intelligentsia in the 19th century. She published poetry and translation literature in periodicals.

She was born in Kalofer. For a short time she lived in Plovdiv with her family and in 1834 they moved to Odessa. Her father, Stefan Mutev, and her two uncles Evstati Mutev and Stefan Toshkovich were prominent Revival Period traders in close relations with Vasil Aprilov and Nikolai Palauzov. Elena Muteva grew up in the environment of her highly educated brothers: Dimitar – graduated with honours from the Richelieu Lyceum in Odessa, Doctor of Philosophy and Master of Liberal Arts at the University of Berlin, founder and editor of Bulgarski knizhitsi magazine (1858–1862), first director at the Bolgrad High School, 1858; Nikola – graduate from the Richelieu Department (1939) and later the Composer Department of Romе Conservatory (1849), a teacher at the Bolgrad High School, considered the first Bulgarian composer (Андреев 1952: 58–59), and Hristo – graduate from the Law Department of the Richelieu Lyceum (1843), a publicist in the office of Odessa Mayor. Elena Muteva was only 25 when she died from tuberculosis.

The consistent and long-standing activities of Marina Mladenova (1974, 1984, 1999, 2012) –researcher of E. Muteva’s life and works, revealed and put the diverse biographical facts in order and gave new curious interpretations of the creativity of the ‘first Bulgarian educated woman who, on an equal footing with men, contributes to the development’ (Шишманов 1916: 129) of Bulgarian literature and public life. The scientific precision and professional searches of M. Mladenova of local and foreign archives in Kiev, Odessa and Bolgrad documented and systematized the available information, and denounced some inaccurate and false claims that have been hanging in the scientific field. In connection with the common assumption about the education of E. Muteva in Odessa, M. Mladenova reported that the name of the Revival Period poetess was not recorded in the surviving archives of the Institute of Noble Maidens and of two of the seven boarding schools (Младенова 1984: 47).

Very young, E. Muteva welcomed at her home scientists, writers and public figures, and the first Bulgarian women studying in Odessa for teachers – Anastasia Mihova Tosheva and Sasha Milkova. The home of the Mutevs at Grecheska Street began to function as the first literary salon of the Bulgarian intelligentsia – the letters received were read, the news in the periodical press and the published reviews of the first Bulgarian books were discussed. It is here that the critical discussion emerged – one of the key elements of the Revival Period – on the artistic means of expression in Bulgarian. The first Bulgarian poem Stoyan and Rada (1845) has been the exemplary illustration by Nayden Gerov of the native language capacity in the creation of literature and lyrical dedication addressed to the young Bulgarian poetess. Already in 1840 N. Gerov took lessons with Dimitar and Hristo Mutevi in their home and from 1841 to 1842 his first love poems were dedicated to a ‘sister’ and ‘compatriot’ (at that time E. Muteva was still 12–13 years old). It is very likely that these poems were read and discussed in the first literary salon (Младенова 2012: 94). In the 1940’s, the first unofficial literary contest on a given theme (worship of God) took place in the house of the Mutevs, and as a result of this challenge N. Gerov’s poetic work Ode to God appeared (F. 22, a.i. 589, p. 16, 72–73) along with Muteva’s poem Бог [God], which won the contest.

Most often, Elena Muteva’s name is associated with the birth of the New Bulgarian original and translated literature produced by women. Among the Revival Period authors E. Muteva is considered as the first folklorist, translator and poetess. She was ‘one of the brightest creative figures among the Bulgarians in Odessa in the 1840’s and 1850’s’ and together with Nayden Gerov, Dobri Chintulov and Ivan Bogorov formed ‘the four’ of Odessa literary circle’ (Станева, 2009: 70). The role played by Odessa as an educational centre on the formation of the views of Elena Muteva, and her participation in the cultural and social processes during the Bulgarian Revival should not be overlooked.

The lack of her portrait photograph leads us to the ‘verbal portrait’ (Младенова 2012: 60) of the 15-year-old Muteva made by the 29-year-old Russian Slavicist, professor at Kazan University Viktor Grigorovich (1815–1876). In his diary of 20 July 1844 we read: ‘MEETING with the first Bulgarian. This meeting rewarded me for all the hassle. Pretty, natural, talkative enough, but there is more to be desired. […] Perhaps modesty, or perhaps neglect, did not allow her to express her sublime love for her homeland. This meeting must be remembered’(Шишманов 1916: 87). In the same year Elena Muteva wrote down two songs for V. Grigorovich, Ах! Мари бяла Цвето [Ah! You, fair Tsveta] and Радо, бяла Радо [Rada, you, fair Rada], which the Russian scientist copied and sent to Slovak scientist Pavel Shafarik (1795–1861). They are now kept at the National Museum in Prague. In Zagreb, V. Grigorovich gave manuscripts from his collection of folk songs to Slovenian author Stanko Vraz (1810–1851), who selected some texts. The first of the two books published by Vraz (Kolo 28) included the song Радо, бяла Радо, written by E. Muteva. In 1996, Czech scientist Zdenek Urban (1925–1998) mentioned the contribution of the first Bulgarian female folklorist in his academic speech ‘Bulgarian folklore – known and unknown’, delivered in Shumen (Младенова 2012: 86).

The translation and creative activity of Elena Muteva were largely related to Bulgarian Revival Period periodical press. Four years after her death, two of her poems, Бог and Басня [Fable] were published in the Bulgarski knizhitsi magazine (1858, year I) together with the narrative work Турски приказки [Turkish Tales], translated from the collection (1844) of V. Grigorovich. In the translated book, only one of the five Arabic tales is associated with the Revival Period reception of the 1001 Nights. N. Aretov defined Muteva’s translation as ‘a specific transitional level that has retained the old interest in the work itself, combined with the new attitude to a folklore monument’ (Аретов 1990: 34).

In the archives of Naiden Gerov (Col. 22, a. u. 589, f. 125), another poem of hers, Рождество Христово [Nativity of Christ], is preserved, which K. Topalov defined as an imitation. Earlier, I. Shishmanov had also qualified the ode Бог as an imitation of G. Derzhavin (1743–1816). On her part, however, M. Mladenova rather accepted that Бог was the original work of E. Muteva, and the poem of the Russian poet has served only as a model (Младенова 1974: 245). Virginia Paskaleva’s position in Българката през Възраждането [The Bulgarian Woman during the Revival Period] in regards to E. Muteva’s second poem, Басня, was similar: ‘In the field of fable she is the first. There are no Bulgarian specimens, but there is a difference between her fable and that of Krilov’ (Паскалева 1984: 55). It is quite reasonable to classify Басня as original literary fable (Николова 2004: 359–362), as the highest stage of art in relation to folklore and pre-literary types. The two poems have been repeatedly included in different anthologies of Bulgarian literature, with the ode Бог finding a place in the two-volume Българска христоматия [Selected Bulgarian Readings] (1884) by I. Vazov and K. Velichkov presenting the classical genre patterns of Bulgarian and foreign literature.

Literary historian and critic K. Staneva explained how the poetry works of the Revival Period poetess were related to three different genres – the fable, the ode and the praise glorification: ‘The three poems evidence of the use of genre examples, of a purposeful enrichment of the New Bulgarian language in terms of style, and of its legitimizing as a language of Muses; and the translation of the Турски приказки is poetic, saturated with figuratively complicated registers, with idiomatic and syntactic patterns, in which there is a specific departure from the traditional commentary on the opposition Vaztok [East]–Europe’ (Станева 2009: 74). E. Muteva’s poems were not translated after Krylov and Derzhavin, but rather one can identify an influence and borrowing of ideas from the foreign authors, and intertwining of the original creativity with elements of adaptation. This process was quite natural in the formation of the new Bulgarian literature in the 19th century: ‘The poems of the young poets in the Odessa Circle reveal the influence of some works by Pushkin, Batyushkov, Zhukovsky, influence of the Slavophile theme in Khomyakov’s poetry’ (Дамянова 1983: 54). Mladenova suggested that Muteva’s refusal to publish her poems in life has been because of her comparison with the works of poets such as Pushkin, Lermontov and Nekrasov. The rich library of E. Muteva is well known, which testifies to a great extent to her literary interests. In 1856, N. Gerov appealed to S. Toshkovich and N. Palauzov (Архив на Найден Геров 1914: 161–162, 400) to find the publication of Father Nathanael’s Приятелское писмо от българина к гръку [Friendly Letter from a Bulgarian to a Greek] in the personal library of Muteva: ‘This research was there with the late Elenka, so it should be still found among her books. It is a good one because it shows that Bulgarians, even under Turkish rule, had had bishops of their own’ (Архив на Найден Геров 1914: 162).

The reception of the story of the Russian sentimentalist writer A. Veltman, Райна Княгиня [Raina Knyaginya] during the Bulgarian Revival Period led to the translations of Elena Muteva and Yoakim Gruev, which appeared simultaneously in 1852. The first edition of the book by the Bulgarian poetess was published in St Petersburg with the donation support of the Kalofer School and boasted reviews in the Tsarigradski vestnik and Moskvityanin magazine. The second edition was published posthumously in 1856 in Odessa. Ten years later, the drama by Dobri Voynikov appeared, based on Veltmanov’s story, translated by E. Muteva. In her research on the topic of Rayna Knyaginya in the Revival Period cultural space, N. Putova concluded that the interest in both translations of Райна българска княгиня was initially not so wide (Пътова 2017: 209–210).

Due to the increased literary critical interest in the Bulgarian scientific field, the name of Elena Muteva, alike other names of Revival Period authors such as Stanka-Nikolitsa Spaso-Elenina, Ekaterina Vasileva, Irina Ekzarh, Rada Gugova-Kirkovich, Maria Dobroplodna, Elena Borisova, Anastasia Uzunova, to mention but a few, does not remain enigmatic and her biography and creative realizations complement and enrich the educational, cultural and literary appearance of the Bulgarian Revival Period.

View the embedded image gallery online at:
https://sesdiva.eu/en/virtual-rooms/national-revival-of-slavs/item/126-elena-stefanova-muteva-en#sigProId1fffc866ae
back to top