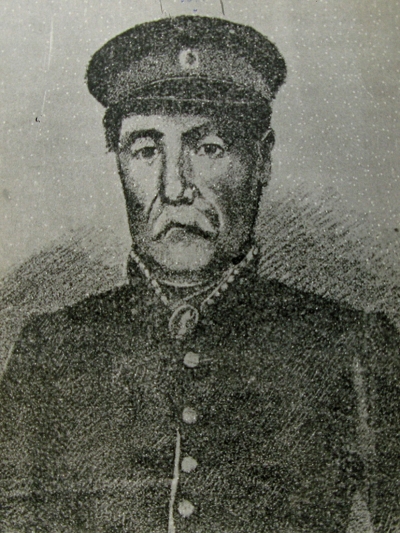 Bulgarian Renaissance educator, writer, translator, folklorist, teacher. One of the first Bulgarians educated in Odessa education in the 19th century and a participant in the Odessa literary circle. Champion of the development of modern Bulgarian education.

Zheko Petrov Rusev was born in the Stara Zagora village of Pishmani (present-day Razkayanie). He first studied pottery and soap-making in Stara Zagora, then continued his education in Veliko Tarnovo, in the monasteries of Mt Athos, and attended the mutual-instruction school [Bell-Lancaster’s method] in Gabrovo with Neofit of Rila for twenty-two years. His teaching, cultural and educational activities were linked with important educational centres,​ Stara Zagora (1832), Gabrovo (1836–1837) and V. Turnovo (1838–1839), where he opened a mutual-instruction school. With the support of V. Aprilov and N. Palauzov, he graduated from the Odessa Theological Seminary (1839–1845) and took the Knyazheski surname, with which he was remembered. He received important recommendations for his further development by Russian historian, archaeologist and director of the Richelieu Lyceum Nikolay N. Murzakevich (1806–1883), and during his stay in Kharkiv – by Russian Slavicist, professor and academician at the Saint Petersburg Academy of Sciences, Professor Izmail I. Sreznevsky (1812–1880).

Knyazheski became one of the first Bulgarian scholars and participants in the formation of the first Bulgarian literary community in the 1840’s, the Odessa Literary Circle (together with Dobri Chintulov, Ivan Bogorov, Nayden Gerov, Botyo Petkov, Elena Muteva, etc.). After completing his education, during his stay in Odessa and St Petersburg (1845–1847), he collected books and textbooks from celebrities and institutions, which he sent to Bulgarian schools to teach secular subjects. After his return from Russia (1847), he was a teacher again in Stara Zagora, where he taught Slavic grammar, geography, sacred history, Russian, etc. Here, together with the Revival Period teachers Anastasia Mihova Tosheva (January18, 1837–1919) and his niece Alexandra Milkova (Mihaylova), he laid the foundations of women’s education with the opening of a women’s school (1857) at the Convent with the Church of St Dimitar. In addition to Russia, he travelled to various places around the world – to Syria, Jerusalem, North Africa, Greece, Serbia, Wallachia and Moldova. As from 1869 he served as a translator at the Russian Consulate in Veliko Turnovo and later in Ruse.

Revival Period intellectual Z. Knyazheski actively contributed to the development of education and school activities and to the modernization of Bulgarian education. He has repeatedly published notices in periodicals in promotion of secular disciplines. On the pages of Konstantinopolski vestnik newspaper, Z. Knyazheski once again addressed his ‘Beloved Countrymen’ to announce that there were various globes and teaching aids available to be used in the teaching process (Globe of the Sky, medium height; Globe of the Earth, medium height), geographical maps (General map of Europe, one leaf, compiled by Sveshnikov; General map of the five parts of the world, in 6 sheets, large, compiled by Langer, etc.), atlases and textbooks (Geographic Atlas, 64 pages, compiled by Zuev; School Atlas, 63 pages, compiled by Sidov; School Geographic Atlas compiled by Dufur, 34 pages; School Atlas of World Geography, 41 pages, compiled by Kuznetsov). The author offered his services by committing himself to deliver the Russian publications and manuals ‘from Odessa to Eski-Zahra’ (now Stara Zagora) to the Bulgarian public, for which he was assisted by V. F. Odoevsky (1804–1869).

In this announcement, as well as in other journalistic statements, Knyazheski’s characteristic journalistic pathos and unbridled enthusiasm for accessibility to secular literature are evident, along with some pessimism and disappointment at the lack of assistance to achieving wider publicity of the idea: Being a true collaborator to youth education, I wrote to ask the sellers to tell me how these textbooks are sold, and I have published several times in the Bulgarian newspaper, but as you can see, this publication is shitty and no one has any idea how to address it for these items (Цариграски вестник, 1961, issue 19, 6 May, p. 4).). A few years earlier, in the Literature section of the Tsarigradski vestnik newspaper, Z. Knyazheski wrote another poignant, enlightening announcement in the spirit of Paisiy’s rhetoric: Do not feel hurt as I’ll tell you another irrefutable truth, it is the following: that we, Bulgarians, spend thousands of money on food, guests and items, for false monasteries, Mount Athos and the Holy Sepulchre we spend thousands, and we are not ashamed to do it. But if our child asks us for 5 pennies for a book, it will take a month or so for us to give him the pennies, or we would not give him at all, and so our child would remain blind forever, while for other things we spend countless money. (Цариградски вестник, issue 27, 1 July 1861, p. 4 [L. Minkova incorrectly cited issue 403, Nov. 1, 1858, p. 4 in her paraphrase of the quotation].

Another important merit of Z. Knyazheski, similar to the activities of Bulgarian patrons and aides in the 19th century, was his effort to send 13 Bulgarian scholars to Russian higher education institutions to be educated as teachers, doctors and midwifes. In 1850, he left for Odessa with A. Mihaylova and A. Tosheva, who received material support of Russian philosopher and publicist Yuriy Samarin (1819–1876).

Researchers Tsveta Undzhieva and L. S. Selivanova present valuable information about Zahariy Knyazheski’s stay in St Petersburg and Moscow, about his acquaintance with representatives of the Russian intelligentsia (professors, writers, public figures, publicists), about his search for material support, and popularization of the Bulgarian question of church and political independence among the Russian public. The publication of T. Undzhieva, Документи по Българското възраждане в съветските архиви [Documents on Bulgarian Revival in Soviet Archives] (1962, pp. 163–174) contains thirteen letters by the Bulgarian author to the Russian critic, poet and professor at the Saint Petersburg University P. A. Pletnev (1792–1865), to Russian historian and writer Mikhail P. Pogodin (1800–1875), to Russian Slavicist, archivist, historian and professor at the Moscow University Nil A. Popov (1833–1892), to famous Russian writer, translated during the Bulgarian Revival Period Alexander F. Veltman (1800–1870), and to Pyotr A. Pletnev and D. Kirkovich.

On her part, L. V. Selivanova in Новая страница болгаро-русско-украинских связей (Неизвесные факты о жизни Е. П. Гребенки и З. Княжеского) [The New Page of Bulgarian-Russian-Ukrainian Relations (Uncertain Facts on the Life of E. P. Grebenka and Z. Knyazheski)] (1963, pp. 187–211) presented other unknown until then letters of Knyazheski to Vladimir F. Odoevsky and, accordingly, by the Russian writer, musicologist, and publisher to the Ukrainian fable-writer Eugene Grebinka (1812–1848) with a recommendation to Knyazheski. This correspondence also illustrated the Russian-Bulgarian relations in the 19th century – the relations of Z. Knyazheski with Russian public figures, writers and some of the most prominent representatives of the Russian Slavic studies, namely A. S. Khomyakov (1804–1860) and Yu. F. Samarin (1819–1876), with Russian philologist and ethnographer Arist A. Kunik (1814–1899), with P. S. Bilyarski and others. Researcher Lilyana Minkova revealed new additional information about Knyazheski’s activities by publishing the interesting letters exchanged between the Bulgarian man-of-letters and one of the first Russian Slavicists, Osip M. Bodyansky (1808–1877), as well as the already mentioned letters of recommendation from N. N. Murzakevich and I. I. Srezensky to O. Bodyansky (Минкова 1974: 125–126). Zahariy Knyazheski managed to establish a surprisingly rich list of contacts in Russia, as evidenced by his correspondence: M. Pogodin, O. Bodyansky, V. F. Odoevsky, Sheviryov, Raic, N. Protasov, M. V. Tolstoy, P. Vyazemsky , A. Veltman, M. Zagoskin, A. S. Khomyakov, N. Popov, Srezensky, S. Maltsev, N. Sushkov, Aksakov brothers, Yu. F. Samarin, to mention but a few.

The literary and publishing activity of Zahariy Knyazheski also deserves attention, as one of his most famous works was Введение в истории болгарских славян [An Introduction to the History of the Bulgarian Slavs] (1847). The book undoubtedly fit into the Revival Period historiography as part of the efforts to affirmation and development of the national idea. The book Введение в истории болгарских славян bears a Russian title, it was published in the Moscow University Press with the support of O. Bodyansky, but the very narration by Zahariy Knyazheski is in Bulgarian and the focus is on the story of the ‘Danube Slavs’ from the 6th century AD until the beginning of the Ottoman rule. The author, like other 19th-century Bulgarian stories, refered indirectly to some ancient and Byzantine historians – Pliny, Ptolemy, Marcellinus, Yornald, and others. The first part of the book shows Knyazheski’s affinity for folklore – he paid special attention to ancient customs and beliefs. The second section addresses Славяните в сегашната България и по-нататък на юг, в Елада, Пелопонеса, Малая Азия и прочее [The Slavs in present-day Bulgaria and further south, in Hellas, Peloponnese, Asia Minor and so forth] (1–30), the third covers Историята на старото Българско царство [History of the Old Bulgarian Kingdom] (30–44), and the last one covers the Second Bulgarian empire (44–52). In compliance to the effort to elaborate a self-identification national identity model, in the Введение в истории болгарских славян significant place is attributed to the passages telling about the rule of Knyaz Boris and the baptism, to the invention of the Slavic alphabet and the deed Saints Cyril and Methodius (‘they began to work hard so as to the Slavs under the Greek [influence] to have the Scripture translated into their own language (ca 855 AD) and one of them Methodius christened Boris’, p. 39, to the Golden Age and the merits of Tsar Simeon. In his history, Z. Knyazheski built on the view of Slovak Slavicist Pavel Shafarik (1795–1861) in order to defend the ancient ethnogenesis of the Bulgarians and their belonging to Europe.

In his works the Revival Period man-of-letters addressed the issues of Bulgarian literary language and spelling. As a prominent purist, Knyazheski strived to eliminate the words of Turkish origin that had taken root in the Bulgarian language by placing in brackets the Turkish equivalent: средства (тертипи) [means], жертва (курбан) [sacrifice], часовник (сахат) [clock], пепеляна вода (бурун сую) [ash water]. L. Minkova explained that in his book Совети за непраздни жени [Tips for Pregnant Women] (1853), Knyazeski made effort to translate and clarify medical (Latin and other) terminology. The author resorted to the Turkish or the Russian word or explained the term descriptively: температура [temperature] (топлота = warmth), бездождие [dought] (сухо време = dry weather), погодата [weather] (времето, атмосферата = weather, atmosphere), апоплексия [apoplexy] (дамла = stroke) and more. Discussing Knyazheski’s book Средства за предварвание за заравянието на мнимоумрелите или примрелите человеци [Means of Prevention of the Burial of the Mimic Dead or Fainted Men] (1858) and the translation of Edgar Poe’s short story under the title Магнезизм и душеборци done by T. Shishkov via Greek (Цариградски вестник, issue 275–277, 5–19 May 1856) N. Aretov drew the attention of researchers to a completely different and slightly studied line in the Revival Period literature – for the series of ‘translated ‘horror’ works, either literary or science fiction’ and to ‘the identifiable interest in what was mysterious and fearful at that time’ (Аретов 1989: 36).

Z. Knyazheski remained fully committed to the literary, journalistic and social activities, as he himself claimed I remain until death without fatigue for national education, your compatriot (Цариградски вестник, issue 437, 27.06.1859, p. 4).

View the embedded image gallery online at:
https://sesdiva.eu/en/virtual-rooms/national-revival-of-slavs/item/131-zakharij-knjazheski-en#sigProId934bbf1227
back to top