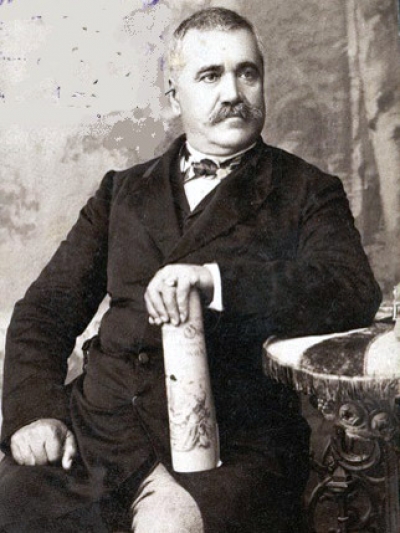 Bulgarian enlightener, man-of-letters and prominent publicist during the Revival Period, author of a number of textbooks, books, articles, plays; with his translations he promotes West European and Russian literature.

He was born in Tarnovo. He received his initial education in his hometown in the Bulgarian and Greek schools until 1847, and in the town of Elena (1849–1851), where he was taught by prominent Revival Period teachers and founders of the Tarnovo Literary and Spelling School, Nikola Mihaylovski (1818–1892) and Ivan Momchilov (1819–1869). He continued his education in Paris (1862–1865), where he studied at the prestigious Versailles Institute for Teachers, the Sorbonne and the Collège de France. He became acquainted with the works of famous French publicists and writers Emile de Girardin (1806–1884), Edouard Röhle Lefebvre de Laboule (1811–1883) and Ernest Renan (1823–1892). Later he attended lectures on Slavic philology in Prague (1866) thanks to a scholarship provided by Dr Petar Beron (1799–1871), one of the first patrons and encyclopaedists in the 19th century and the creator of the first Bulgarian Primer (Буквар с различни поучения, 1824).

In two letters from 1863 to Ivan Seliminsky (1799–1867) T. Shishkov shared about his literary interests and pursuits – what artistic and scientific works he had read from the French, about the search and collection of materials for the Bulgarian historical and cultural heritage (National Library Sts Cyril and Methodius, Bulgarian historical archive, f. 28, a.u. 1, p. 29–33). He popularized the ideas of Russian Slavic writer Yuri Venelin (1802–1839) for the search and collection of Bulgarian folklore. During his stay in Paris T. Shishkov served as a correspondent for the Russian magazine Kolokol, collaborating with its publishers Alexander Herzen (1812–1870) and Nikolai P. Ogaryov (1813–1877), as well as the Czech edition Czech, published by Joseph Vaclav. Later, during his education in Stara Zagora, the French alumnus monitored the activities of Herzen and Ogaryov in London and subscribed the Community Culture Club (chitalishte) for Polyarna zvezda and Kolokol journals (1860). The names of Georgi Rakovski (1821–1867) and Georgi Valkovich (1833–1892) are also found in these Bulgarian-Russian relations. In 1858, Rakovski received a letter from a friend of his in Kiev proposing to find someone to popularize among the Bulgarians the Herzen editions and thus help solve the Bulgarian national issue. It was not until 1862 that Dr Valkovich replied in a letter to Rakovski that a literary publicist agreed to write in Kolokol and Czec journals. T. Shishkov’s cooperation in Russian periodicals was an expression of his efforts to attract the attention of the European public to the Bulgarian issue.

T. Shishkov’s many years of teaching and educational activities began in Kalifarevo, Tarnovo District (1851–1852), and later in Stara Zagora (1856–1861), and after his return from abroad he continued teaching in Sliven (1866–1869). Then again he worked in his hometown of Tarnovo (1869–1870, 1873–1877), and at the beginning of the 1870s he was the director of the Bulgarian school in Constantinople (1871–1873). Shishkov was the founder of the school in Stara Zagora, and governor and secretary of its first board of trustees (1861). He organized one of the first solemn celebrations of the day of the Blessed Brothers Cyril and Methodius and of the Slavic script. His public and political involvement was connected with heading the struggle against Uniates in Stara Zagora, and with maintaining contacts with the leaders of the national movement for independent church, among others.

At the Tanovo School he taught Bulgarian language, Bulgarian History, French, Literature, Arithmetic, Physics, Painting and Singing. Due to his disagreements with Anastas Granitski (1825–1879), he left the school and, with the permission of the Turkish governor of Tarnovo, founded a private school in 1870, where he prepared upper sixth grade students to enroll in foreign universities. The educational activity of T. Shishkov helped in the development of a school rulebook for the Tarnovo schools (1874), in the debate on the opening of an ecclesiastical school in Tarnovo, in the examinations of candidates for the Petropavlovsk Seminary near Lyaskovets, to mention but a few. Shishkov’s extensive social and cultural activities are evidenced by his connections with Tarnovo Municipality, Radost Women's Association, and representatives of the Community Culture Clubs and churches.

After the Liberation T. Shishkov occupied important public and educational positions – he was an administrator with French language with the second governor Dragan Tsankov (1828–1911), director of Varna School (1879), prosecutor at the Varna District Court (1881), and later in Shumen Court. In 1883 he was transferred to Svishtov Regional Court. He later became a district school inspector in Svishtov (1884–1885), and teacher at the Ruse and Varna high schools.

The pages of Shishkov’s historical manual feature all possible textbooks on Bulgarian history and all historical works in the press – there are the names of Paisiy of Hilendar, Sofroniy of Vratsa, H. Pavlovich, V. Aprilov, G. Rakovski, D. Dushanov, D. Tsankov, D. Voynikov, D. Manchev, M. Drinov, S. Palauzov, P. Odzhakov, G. Krastevich, etc. In the preface to the History of the Bulgarian People, the figure of Dr Peter Beron, patron and encyclopaedist, is mentioned, as well as the possibility of searching for valuable and old sources in two of the largest libraries in Paris.

In this history textbook, T. Shishkov mentioned his trsncript of Paisiy Hilendarski’s History of Slavic-Bulgarian History (1722–1773), containing copies of drawings of kings, saints and coats of arms of the Balkan peoples, taken from Christopher Zhefarović’s Stematography (1690–1753).

As a follower of N. Mikhailovsky and I. Momchilov, in his studies За българската книга или за азбуката и правописанието на новобългарския език [About the Bulgarian Book or about the Alphabet and Spelling in the New Bulgarian Language] (Balgarski knizhitsi, 1859) T. Shishkov defended the ideas of the Tarnovo Literary School for affirmation of the New Bulgarian language and for the abandoning of some archaic linguistic forms. Through his teaching and teaching aids in mathematics, the Revival Period writer was the first to introduce the decimal system and the solution of the problems based on the simple triple-rule calculation. The textbooks, as well as the articles and translations of T. Shishkov dealt with to the problems of school education, with Bulgarian spelling, and with the importance of the Glagolitic script for Slavdom.

He actively published articles, orations, poems, critical essays on theatrical productions and works of art, on the collection of Bulgarian folk songs in the Bulgarian National Revival periodicals – Tsarigradski vestnik, Balgarski knizhitsi, Bulgaria, Dunavski lebed, Vreme, Makedonia, Pravo, Turtsia, Chitalishte, Zornitsa, Svobodna Bugaira, and more. He was actively engaged in translation and his translations were characterized by Bulgarisation that was typical for the Revival Period. From French he translated Concise Encyclopaedia, from Greek First Food for the Healthy Human Mind, from Russian Елементарна словесност в два курса [Elementary Literature in Two Courses] (1873), and explicitly noted that he was in line with the textbook of Nikolay Gavrilovich Minin (1818–1861) Educational Theory of Literature (1861). In Elementary Literature, the author included the directional poem by N. P. Ogaryov, We Will Win With This, taken from Kolokol. Many of the examples in the Russian textbook have been replaced with Bulgarian realities from the fields of history, literature and folklore.

In addition to his translation of textbooks, T. Shishkov also translated fiction works (Bornholm Island, The Kingdom of Poetry by Karamzin, the Turkish short story Kiz-kulesi, poem Traveller by Zhukovsky. He also wrote two plays – the historical drama Велизарий [Belisarius] (1873), much reminiscent of K. H. Traudzen’s Belisarius after the French novel by Jean-François, and the comedy Не ще ли може или Глезен Мирчо [Can’t it go or Pampered Mircho] (1873) in line with the Russian comedy The Minor by Denis Fonvizin.

Not a few textbooks and translations by T. Shishkov remained in manuscript and unpublished: Algebra, Geometry, Basic Physics Lessons, Concise Physiology in Two Parts, Zoology, Beginnings of Cosmography, Basic Ethics, Concise French Grammar, Bulgarian-French Phrase-book, Little Robinson, Uncle Tom’s cabin and others. T. Shishkov’s literary and social activities contributed to the development and establishment of the Bulgarian Revival Period culture through the creation, compilation, and translation of a number of textbooks, journalistic and artistic works.

View the embedded image gallery online at:
https://sesdiva.eu/en/virtual-rooms/national-revival-of-slavs/item/62-todor-nikolov-shishkov-en#sigProId2673a959c9
back to top