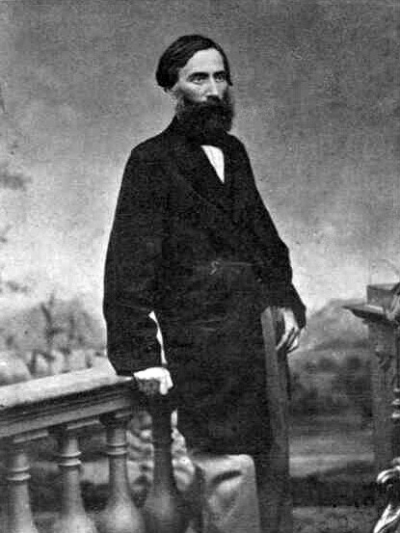 He was born in Kalofer on September 4, 1818. In 1831, he left for Wallachia, and then, in 1833, he arrived in Odessa. In the Black Sea city he attended the high school of Richelieu Lyceum, graduating in 1837 with honours. In the same year, he became a student in the Physical and Mathematical Department of the Richelieu Lyceum. Mutev graduated in 1840 and continued his education at the University of Bonn. He did not stay there for long, and in 1841 enrolled in the Faculty of Philosophy at the Humboldt University in Berlin, where he prepared a dissertation entitled За психрометрията [On Psychrometry]. He defended it and received the scientific title of Doctor. There are not clear reports on his endeavours in the years that followed. As some have it, he returned to the Russian Empire and lived for a while in Odessa, Moscow and St Petersburg. In 1857, he went to Istanbul, where he became editor of Bulgarski knizhitsi magazine. After about a year, Mutev’s health deteriorated and he was forced to submit the editors’ functions to Ivan Bogorov. He left Constantinople and settled first in Odessa and then in Bolgrad (1859). Mutev stood at the head of Bolgrad High School several months after its founding, and remained its director until his death, playing an important role in making the high school a major centre of Bulgarian culture. He initiated the setting up of a boarding school and a printing house at the high school. He died in Bolgrad on 13 January 1864.

During his time Dimitar Mutev was considered one of the most educated national Revival Period figures. He was one of the first Bulgarians to succeed in defending his doctorate. His dissertation On Psychrometry was devoted to meteorology. A number of scholars put great interest in the text by exploring the methods used in the thesis and its relevance to science as a whole.

In the Bulgarian environment, the most remarkable was the work of Dimitar Mutev as the editor of the Bulgarski knizhitsi magazine. He established his concept for the magazine from its first year up to issue No14. Issues Nos 14–16 were prepared together with Ivan Bogorov, who, since September 17, 1858, has been engaged in compiling the issue. Therein the editor published, in part, Mutev’s translation of Harriet Beecher Stow’s novel Чичо-Томовата колиба [Uncle Tom’s Cabin] (translated by Mutev as Чичева Томова колиба, 1858). It is thought that Mutev has published a number of other articles that were unsigned, but the language and the tendency for a clearly listed bibliography signified to his authorship. The subject matter of the magazine was diverse – history, physical sciences, and translations. The magazine also became a platform for publishing a number of original Bulgarian works, one of which was the first long short story in Bulgarian, Vasil Drimev’s Нещастна фамилия [The Unhappy Family].

Mutev’s translation of Uncle Tom’s Cabin was highly regarded by many national Revival Period enlighteners. The first Bulgarian literary critic, Nesho Bonchev, recommended the translation in a letter to his mother as a reading for his sister. Initially, it was considered as a direct translation, without an intermediary language, i.e. that no other translation was used to make the Bulgarian translation. Maria Pileva discovered that Dimitar Mutev had translated a ready-made preface from the first Russian edition of the novel entitled Хижина Дяди Тома, published as an annex from Issue 1 of Vol. 12 of 1857 of the Russkiy vestnik magazine. The doubling of the consonants in some names – Миссисипи, Гарри, and others – signified of a Russian trace in Mutev’s translation.

The theme and main motive of the novel was probably the major reason for Dr Mutev to decide to translate the book. The focusing on the history of Eliza in the first part is regarded in the Bulgarian space as a narrative that treated the negative nature of slavery, but more through gender-related issues than race – Eliza did not escape from slavery only, but also from the ‘good’ patriarchal society, which could no longer provide her security (Пилева, 2017: 179). During the Revival Period, a big topic has been the place of women in society and whether they should receive the same education as men. Not a few Revival Period enlighteners have discussed the need for women’s education.

Dimitar Mutev’s work is relatively modest, but he has earned himself a place as one of the first Bulgarian scientists working to bring science closer to the perception of Bulgarians.

View the embedded image gallery online at:
https://sesdiva.eu/en/virtual-rooms/national-revival-of-slavs/item/121-dimitar-stefanov-mutev-en#sigProIde0c2a84d8d
back to top