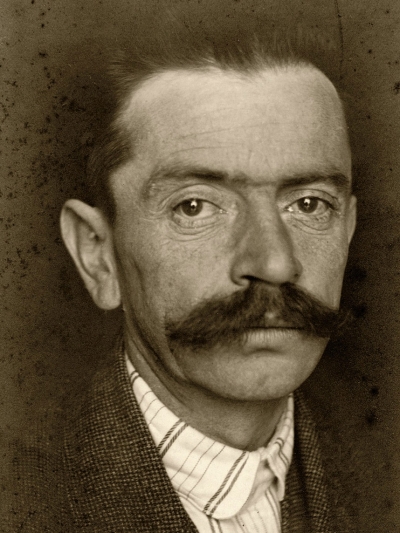 Born into a poor family with many children (he was the eighth of 12 brothers and sisters), he graduated with honors and therefore received financial support from the local community to continue his education. Tsankar published his first work – the ballad “Ivan Katsiyanar” – at the age of 17, when he was a student at the Lyublyana Real School. He also began to publish critical notes and essays, proving himself to be a talented critic. In Lyublyana, his close friends were the future leaders of “Slovenian modernism”: Dragotin Ketta (1876–1899), Josip Murn (1879–1901) and Oton Zhupanchich (1878–1949). Among his teachers was the famous Slovenian literary scholar, essayist Franz Levets.

The only collection of Tsankar's early poetic efforts is his Erotika (“Erotica”), compiled and published in Lyublyana in 1899. Along with Zhupanchich’s Иaљa opojnosti (“Cup of Ecstasy”), his work marked the beginning of Slovenian modernism, in which the influence of decadence and naturalism can be felt. However, the 700 copies of the thousandth printing of “Erotica” – the innocent experiments of an inexperienced young man – were bought out and publicly burned by order of the bishop of Lyublyana, Anton Bonaventura. Three years later, Tsankar published the collection again as a form of political protest, but this publication became at the same time his farewell to lyric poetry. He probably did not consider that his poems achieved the perfection of those of his close friend Zhupanchich, though some of them are still regarded as the pinnacle of Slovenian poetry of that era. Like other representatives of Slovenian modernism, Tsankar became interested in Russian literature (he even changed his original Slovene name of Yanez to the Russian Ivan). In his development as an artist, a significant role was played by N. V. Gogol and F. M. Dostoevsky, although in this regard one cannot fail to also mention F. Nietzsche, G. Ibsen, O. Wilde, M. Maeterlinck and other famous contributors to world culture.

In 1896 Tsankar went to the University of Vienna to study engineering, but a month later he transferred to Slavic and Romantic studies, lost his personal stipend and became a “free artist,” earning his living from his pen. As the first professional Slovenian writer, Tsankar constantly refused lucrative offers of well-paid jobs and earned his living through his writing. He was conscious of his artistic gift as a wordsmith and highly prized his independence. His artistic creed demanded a great deal of him, including fidelity to his gut feelings, freedom from all dogma (including sociopolitical and also national ideas), and integrity to himself.

He remained in Vienna for about 10 years, and this period proved to be very fruitful for him. Here he wrote most of his major novels: Tujci (“Strangers”, 1902), Na klancu (“On a steep road”, 1903), Hiљa Marije Pomoиnice (“Hermitage of Mary Protector”, 1904), Kriћ na gori (“The cross on the mountain”, 1905), Martin Kaиur (“Martin Kachur”, 1905), Nina (“Nina”, 1906), Marta (“Marta”, 1907) and Novo ћivljenje (“New life”, 1908). But in general, the writer was more attracted by the conciseness and concentrated power of genres such as short stories and novellas. After leaving Vienna, he moved to his brother-priest in Sarajevo, and later settled for good in Ljubljana.

Tsankar’s creativity is characterized by its connection with the national literary tradition of Slovenian folklore. It often contains mythological motifs, including the popular legend of King Matthias. Psychologism occupies a huge place in the poetics of his work. His heroes’ inner emotions include feelings of impossible dreams, a passionate desire for something elusive, a striving for the unknown. This can be compared with the constant yet never realized dream of the three sisters – the heroines of Chekhov’s play of the same name – to go to Moscow.

It is no accident that Tsankar's lyricism quickly gave way to depictions of prosaic everyday life. The unsightly reality of everyday life was something the writer perceived with pain and protest against the triumph of her spiritual squalor. The writer experienced these feelings at a deep philosophical level and sometimes expressed them in a satirical way, which imparted to his works lofty social and universal values. In his work, he synthesized the achievements of various literary and aesthetic currents, which were advanced for the turn of the 19th and 20th centuries. Tsankar created his own recognizable artistic world, imbued with a depth of feeling, sincerity, social responsibility and the highest aesthetic purity. Most of Tsankar’s psychological portraits, as well as his situational sketches of interpersonal relationships, remain relevant today. Having overcome a spatial-temporal framework, they have acquired timeless universal status.

The prose of Tsankar turned out to be truly innovative. In it, he managed to overcome the characteristic peculiarities of national literature and to rise above realistic similitude. He managed to open a new perspective of artistic vision and delve into the realm of subjective, personal perception of the world. This enabled the writer to personify ideas, people's attitudes and aspirations – from the most intimate to the most pronounced social and national. He first raised the problems of the inner world of the artist and his relationship with the world and society. In a broad social and moral context, Tsankar revealed the real-life tragedy of all those who have been “humiliated and insulted” – workers, laborers, the destitute, sick and needy, and above all – children. These tendencies were reflected in both his novels as well as in his novellas and short stories.

In Tsankar’s famous novella, Ernei the Laborer and His Right, which he considered as one of his best works, the chasm between law and natural human truth was marked. The protagonist of the work, Ernei, spent his entire life laboring for the prosperity of the Stitarov family, treating it like his own, but after the owner’s death, he lost everything created by his own sweat and blood. He failed to discover justice anywhere, neither in his birthplace nor in Ljubljana or Vienna. Consequently, in despair Ernei set fire to the estate, himself dying in the fire.

In the story A Cup of Coffee (1910), Tsankar wrote about a loving, caring mother and his own filial ingratitude and callousness; this work became а supreme example of artistic succinctness and the human desire for moral purity.

The writer also ventured into the genres of journalism, literary criticism and essays. Here he spoke directly about the diseases of modern society, and he tried to address the pressing ethical and aesthetic questions reflected in his own and his contemporaries’ spiritual and moral pursuits.

In national drama, Tsankar created the first examples of psychological [Hlapci (“Slaves”, 1910)] and social drama, comedy and farce [Pohujљanje v dolini љentflorjanski (“The Seduction in the Valley of St. Florian”, 1907)]. He also expanded the boundaries of poetic drama, addressing through it the pressing social, psychological and moral issues of the era [Lepa Vida (“Beautiful Vida”, 1911)]. His comedy Za narodov blagor (“For the Good of the People”, 1900) is a sharp political satire and is still popular today; in it the influence of Gogol's “Inspector” is quite palpable. At the heart of its plot is a split within a political party; two new leaders (representatives of different generations) are trying by all manner of inconceivable means to gain the favor of an influential and – most importantly – rich person. However, he turns out to be much smarter than they think and cares mainly about his own peace of mind. Kralj na Betajnovi (“King of Betaynov”, 1902) is considered Tsankar’s best socio-political drama, in which the “masters of life” are confronted by a new hero – an intellectual who simultaneously experiences feelings of the need to resist and of impending doom.

The writer was politically active: he was a member of the Social Democratic Party, ran for office (albeit unsuccessfully) in the imperial Austrian parliament, read public lectures in different cities during the Balkan wars of 1912–1913. On the eve of the First World War, Tsankar spoke in favor of uniting the southern Slavs into a single confederation, was accused of “Slavophilia” and subjected to short-term arrest. He was mobilized into the army, but quickly released for health reasons. Tsankar deeply experienced this war as a global catastrophe, plunging humanity into chaos and madness. He embodied his thoughts about what was happening and about a possible future in his collection Podobe iz sanj (“Images from Dreams”, 1917), which he considered to be his best book. The writer died on 11 December 1918, after a bad fall, concussion, and subsequent flu, which developed into pneumonia. He was buried in the Lyublyana cemetery “Stings” in the “Grave of poets of Slovenian modernism”, where the friends of his youth – D. Ketta, J. Murn and Oton Zhupanchich – were buried.

Tsankar is rightly considered to be the second greatest Slovenian artist after Frantse Presheren (1800–1849). Thanks to his contributions, Slovenian prose and drama reached a qualitatively new level, not inferior to that of Europe, and many of his works have been translated into foreign languages.

View the embedded image gallery online at:
https://sesdiva.eu/en/virtual-rooms/national-revival-of-slavs/item/43-ivan-cankar#sigProId2e3fcd3432
back to top