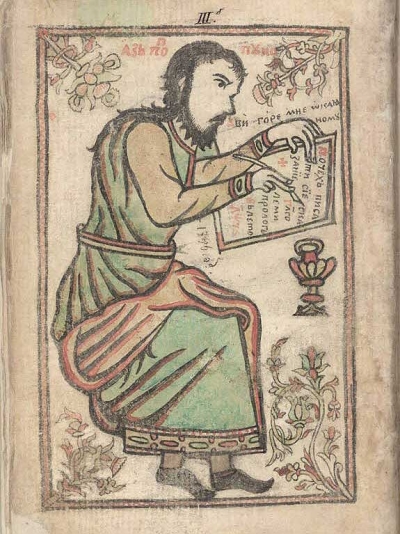 A manuscript of a diverse content, created by Priest Puncho (Puno) from the village of Mokresh (Lom District) in 1796. Its composition reflects the personal interests of the writer and his knowledge of the modern literary tradition, handwritten and printed alike.

The book body covers IX + 374 paper folia; 205x150 mm, written out in medium-sized new semi-uncial font. The covers are in the form of wooden boards with ornamented leather. Language: New Bulgarian with some dialectal elements; spelling: simple, only with smal jer, with no yus vowels; some Serbianisms and Russisms are identified that were influenced by the sources of the miscellany. The decoration is extremely rich: polychrome inserts and Balkan-style initials along with numerous miniatures (30 in number) illustrating the content. The first folia contain two self-portraits of the scribe. On IVb-VIa there is a preface to the revision of the Paisiy’s history, which Priest Puncho has presented in his own name. The first fly-leaf contains the name of the scribe and the place where the manuscript was created. There is a note from 1814 about the consecration of the Church of St George in the village of Dlagoshevtsi (Dalgoshevtsi, Lom District, present-day village of Zamfir) by Dorotey, Father Superior of the Zograf Monastery, during the term of office of Bishop Paisiy of Vidin. The book had been kept with the family of the priest. Today it is preserved at Sts Cyril and Methodius National Library in Sofia, No 693.

The rich content consists of 69 texts, including apocrypha – the story of Adam and Eve and John the Theologian, the Homily for Christmas, Homily about St Panteleemon, Sermon about Job, etc. Included is also a copy of the apocrypha Слово за лъжливия Антихрист, безбожния Сатанаил, как го плени архангел Михаил, воевода на всички ангели [Homily about the False Antichrist, wicked Satanael, how Archangel Michael captivated him, the voivode of all angels], which is in line with an earlier tradition, as well as several prayers for the guardian angel, usually belonging to the amulets. Narratives include Story about King Alexander, an extract from the medieval novel about Alexander (Alexander romance). A few homilies have been drawn from the translation of the Damaskenos Stoudites’ Thesauros (about the Assumption of John the Theologian, the funeral of the Lord, and the descent into hell; about Demetrios of Thessalonike with a description of his 9th miracle; about Sts Kosmas and Damianos; about the first Sunday of Lent). Another range of works go back to a source identical to the Russian prologue – the story of the Nativity of St John the Baptist; the story of Luke the Evangelist, who took the right hand from the relics of St John the Baptist and carried it to Antioch; address of prophet Zacharias to the merciless princes; extended vitae of Martyr Ripsimia; extended vitae of Martyr Gavediy, about Martyr Ripsimia, about Martyr Teodota, etc. Some stories from Paterikon are also traced to Russian printed prologues, which were selected by the compiler in order to strengthen the Christian faith. In the colophon, Priest Puncho noted that among the sources of the miscellany there had been a ‘royal prologue’ – he himself defined the miscellany as a ‘prologue’ (382b). In total, the works with printed prologues as a source are more than 30 in comparison with the Moscow edition of 1735 (Атанасов 1986: 145–146). An important place has the revision of Paisiy’s Slavic-Bulgarian History, along with homilies and sermons by John the Theologian, John Chrysostom, etc., prayers, miracles, stories, and vitas. Priest Puncho included the vitae of Petka of Tarnovo and the first extended vitae of John of Rila. The author’s approach to compile is evident in the story of Tsar Asen the Elder and Tsar Peter of Moscow.

The author’s presence throughout the collection is strongly felt, as the author often speaks on his own behalf and about himself. The title page contains an address to the reader, ‘Whoever reads this scripture before a gathering, to well inform them to [so that they are able to] understand and to glorify the name of God – as they are foolish people like sheep, when they lack a shepherd… And you, my reader, read and guide Christians and you will receive the forgiveness of sins from the gracious God... But, oh, you, my brethren, beloved readers, do not curse me sinfully, but God will guide brotherhood to you all. And bless me, the unworthy, for I have not written this because of great erudition, not because of orthography [the love to write], but because of great love for books and zeal, from my heart I have written it.’ The author often adds different interpolations: e.g. Paisiy’s address to the apostates Priest Puncho had highlighted with a special title given by him, Hated by his own kind. The presence of the compiler of the miscellany is also evident in some advice on life – how to plough and sow the land, how to catch a swarm of bees, how to grow a vineyard, how a man should treat to his wife and children, etc.

The original sources was the Повесть ради Московского цара Петра, що го нарицают москале Буро [A Tale about Tsar Peter of Moscow, who is dubbed Buro the Russ] – a compilation about the baptism of the Russians, only known in our literature (the character has the characteristics of Peter the Great, 1672–1725). Russian chronicle tradition (the story of the testing of different faiths by Prince Vladimir of Kiev) has been among the sources of the work – probably the Kiev-Pechersk Synopsis – in which the events related to the baptism of the Russians represent a reworking of the Повесть временных лет [the Tale of Bygone Years ] (Банков 1975). The text contains historical facts mixed with the author’s reasoning and political position – in his opinion the Russians, being closely related to Bulgarians, will release their brothers from the ‘damned Ottomans’. The book is an example of the individual literary endeavours of the men-of-letters in the 17th and 18th centuries. Not a few of them were not traditional copyists, but authors of compilations with a creative approach to sources. The miscellany of Priest Puncho is a valuable source for Bulgarian-Russian literary relations during the Late Middle Ages. The compiler intended to print it, but failed.

View the embedded image gallery online at:
https://sesdiva.eu/en/virtual-rooms/beginning-of-private-reading/item/71-miscellany-priest-puncho-1796-en#sigProId5fb7fffbef
back to top