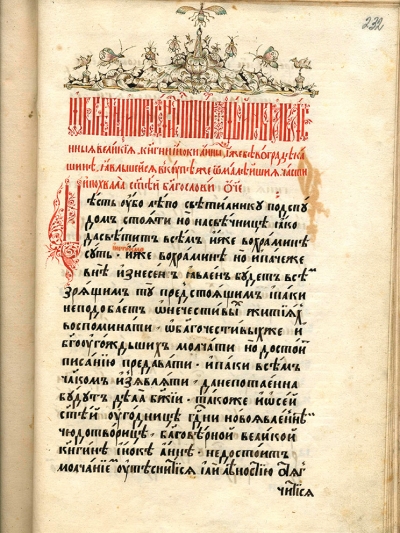 Hagiographic collections about women saints are a rare macro-genre, attested to by a limited number of examples in both Byzantine and medieval Slavic literature.

The importance of selecting individual or group readings according to whether the audience is female or male has been emphasized in a number of medieval written sources. As early as the 5th century AD, Theodoret of Cyrus noted the need for gender-differentiated models, and in the late 7th and early 8th centuries, in his letters to women Theodore the Studite advised them to read the stories of early Christian martyrs, such as St Thecla, St Fevronia and St Eugene of Alexandria. The statutes of the Constantinople Convent Θεοτόκος τῆς Βεβαίας Έλπίδος of 1345 recommended that the Mother Superior follow the ‘living and inspiring examples’ from the lives of the saints and thus become a model for her subordinate nuns (Rapp1996, 323–326). Cyprian, Metropolitan of Kiev, Lithuania, and All Russ’ (ca 1330–1406), also pointed out that in the prayer during the nuns’ haircut ritual, the names of male saints should be replaced by the names of female saints (Ответы 1908, кол. 256). Against this background, it is not surprising that there have been special ‘women's books’ composed only (or mostly) of women’s stories, usually read and sometimes commissioned and owned by women (Ehrhard 1952: 906–915; Rapp 1996; Ангушева 1998; Гагова 2010: 182–204; Петрова 1999 и 2009).

It is difficult to say exactly when women’s stories had begun to separate into separate codes. The earliest known Greek manuscript of the kind is from the late 12th or the early 13th century and was composed by a Father Isaiah for his spiritual daughter, nun Theodora – probably Theodora Angelina, daughter of Emperor Isaac II Angel (1185–1195, 1204 –1205). Isaiah dubbed his creation a ‘women's book’ (βιβλίον γυναικεῖον) or ‘Metericon/Matericon’, uniting famous apophtegms of holy ascetics, from whose exploits and wisdom Theodora must learn. To this end, in his book he quoted maxims and retold the deeds of famous hermits (including Matrona, Melania, Pelagia, Sarah, Synclitica and Theodora), but in fact, to obtain a sufficient number of female examples, he often used the words and deeds of men, changing their names to feminine. Father Isaiah accompanied his Matericon with three letters to Theodora and several teachings written especially for her. The collection is known in several transcripts, and one of them – Cod. gr. 243, RNB, St Petersburg of 1450, in two volumes, is richly illustrated with 48 remarkable miniatures (Guillard 1939; Hausherr 1946; Beck 1959: 645–646; Stiernon 1971; Лихачева 1977: 50–55; Петрова 1999: 67–68; Петрова 2009: 139–141; Луховицкий 2011). The text of the Greek original has not been published. In the 1950’s, Bishop Theophan, the Recluse (Georgy Govorov) translated the Matericon into Russian, copy in Cod. gr. 243, which he discovered in Jerusalem and in 1853–1859 published it in several successive issues of the Voskresnoe chtenie magazine. His translation formed the basis of a number of later editions (electronic incl.) and translations into modern languages (see Митерикон 1891, 1892, 1908, 1995, 2014; Материк 1997, 2004; Материкон 2003; Matericon 2001; Meterikon 2002; Meterikon , etc.).

Another Byzantine anthology of texts on women, derived from paternalistic collections and independent of the book of Father Isaiah, is preserved in a single transcript as part of manuscript No 513 in the National Library of Greece, Athens (dated by various researchers between the 13th and 15th centuries). It became known in science as the New Matericon (Πάσχος 1990; Новый Митерикон 2010). Its publisher P. Paschos dated its creation to the 13th century.

Along with the collections of the Matericon type (a specific ‘female’ parallel to the Patericons), six hagiographic collections from the 14th–16th centuries containing various selections from the lives of women saints are known in Byzantine literature. The texts included were most often (but not necessarily) complying with Simeon Metaphrastes’ version and were usually arranged according to the church feast calendar. Their purpose – for collective or individual reading, for female or male monasteries, is the subject of scientific discussion, as in very rare cases it has been explained by postscripts or colophons (Ehrhard 1952; Rapp 1996).

Although none of the three attested types of Greek collections had been directly reproduced in medieval Slavic literature, ‘female’ compositions can still be found in some Slavic codices. Compared to their Byzantine models, they show a number of characteristic features, the most significant of which is that they mix texts for women belonging to different genres and had obviously been selected from different protographs. This is clearly visible in the South Slavic manuscripts. Since Bulgarian and Serbian writers do not have large hagiographic collections, and reading menaion with texts for the whole year were available only in the most important monastic centres, they most often merged women’s lives and legends about women from different paterikons in one book. A typical example in this respect is the Bulgarian manuscript No 57 from the collection of Guilferding in the Russian National Library, St Petersburg from the late 14th–early 15th century. In its beginning there is a group of lives (Eupraxia; Fevronia; Faith, Hope, Love and Sofia; Euphrosyne and martyr Pelagia), followed by thirty stories with female characters from the Bulgarian Paterikon, Alphabetic-Jerusalem and Roman Paterikon, and Полезно слово за монашеското житие [A Useful Homily for the Monastic Life]. Another two women’s lives were added to the above (of Theodora of Alexandria, and of Ripsimia and Gaiani). A similar combination of texts is found in other codices, such as the17th-century Harlay 7630 manuscript from the British Library in London. In not a few of cases the theme of female holiness has been developed in separate voluminous sections of collections, followed or preceded by important monastic readings, cf. manuscript 1037 from Cyril and Methodius National Library, Sofia from the late 14thcentury, manuscript 12.3.9 from the Library of the Russian Academy of Sciences, St Petersburg from the last quarter of the 14thcentury, manuscript 93 from the Patriarchate of Pec from the first third of the 15thcentury, etc. (Петрова 1999).

Unlike the South Slavic collections, which comprised mainly a combination of lives of saints and paternalistic stories about women, most Russian manuscripts offered a very rich repertoire of women’s lives – sometimes exceeding twenty in number (cf. for example manuscripts F 98 and F 140 from the collection of P. Vyazemsky, Russian National Library, St Petersburg, 15thcentury; No 815 from the collection of M. P. Pogodin, Russian National Library, St. Petersburg, 15thcentury; No 13 from f. 775, collection of M. I. Chuvanov, Russian State Library, Moscow from the third quarter of the 15thcentury, etc.). However, they are also accompanied by homilies, instructive readings and monastic regulations. For example, in Pog. 815 manuscript the lives of saints are accompanied with texts for the feasts of the Mother of God. In Vyaz. F 98, the group of 22 women’s lives is preceded by texts for major Christian holidays (mainly for Easter and most often written by Kiril Turovki), followed by a few words that are not directly addressed to a female audience. In Vyaz. F 140 part of the female hagiographic narratives are marked with a marginal note, emphasizing on the usefulness of these readings for the nuns: Добро сие слѡ(в) прочита(ти) черноризица(м), and pointing to their use in the dining room of the nunnery (Петрова 2009 ). Chuv. 13 contains eleven hagiographic narratives for women separated from the rest of the code by its own title Житьѧ. и поⷣвиги. и моучениѧ. ст҃ыⷯ прпⷣбныⷯ женъ. и ст҃ыⷯ стрⷭтотерпецъ жень. Избрание. They are preceded by the famous Поучение на св. Зосима към неговата духовна дъщеря Анастасия [Teachings of St Zosima to his spiritual daughter Anastasia] (published by Nevostruev 1862), whose author is usually identified with Zosima Vorbozomski (Салмина 1988; Пигин, Романова 2009). The text in itself is a message written in response to Nun Anastasia’s request for consolation and abounds in specific advice to her. In it, the author repeatedly emphasizes on examples from the lives of holy women – Euphrosyne, Eupraxia, Catherine, martyrs who shed their blood for Christ, repentant harlots, who lived for decades in solitude, etc. For this reason, it can be assumed that it had functioned as an introduction to the cycle of women’s lives. The last text in the group offers a Russian model of female holiness – the life of Sophia Yaroslavna, Princess of Tver, nun and founder of a nunnery, who lived in the late 13th–early 14thcentury. Irrespective of the fact that the drive for the compilation of this cycle of hagiographic works for women and the reason for its inclusion in Chuv. 13 collection remain unclear, it is quite possible that it is a transcript of an independently existing manuscript, which opened and ended with the two works mentioned.

So far, only two examples of Slavic anthologies of women’s lives are known, comprising entire codices, without added readings of other genres (pateristic stories about women, texts of the Virgin, instructive readings, excerpts from monastic rules, etc.). Both books were compiled on a specific royal order.

The best known Slavic hagiographic collection of lives of women saints and earliest in terms of chronology is the Bdin Collection (http://bdinski.obdurodon.org/), Ghent University Library, Cod. 408, which is often referred to as a matericon. It was commissioned in 1360 by Anna, the wife of Tsar Ivan Sratsimir of Vidin (1356–1396), and is preserved in a transcript from the very beginning of the 15thcentury (Petrova 2001). It contains twelve extensive pre-Metaphrastes lives and four synaxarion lives of popular saints and ends with a Слово за светите места в Йерусалим [Homily about the Holy Places in Jerusalem]. Its close typological parallel is the collection of women’s lives P I A 30 of the Library of the Russian Academy of Sciences, St Petersburg, which belonged to the family of the Russian Tsar and later Emperor Peter I (1682–1725). It can be assumed that the lavishly illustrated codex was seen as a family treasure, as it was among the items brought from Moscow to St Petersburg during the relocation of the capital around 1709–1711. The collection includes ten texts dedicated to both Christian and Russian women saints, including those who had given their names to the grandmother, mother and four sisters of Tsar Peter. There is no evidence that the codex had ever left the family library (Петрова 2009; Лебедев 2003: 56–58).

View the embedded image gallery online at:
https://sesdiva.eu/en/virtual-rooms/beginning-of-private-reading/item/149-collections-lives-women-saints-en#sigProIdbd2c7d1876
back to top