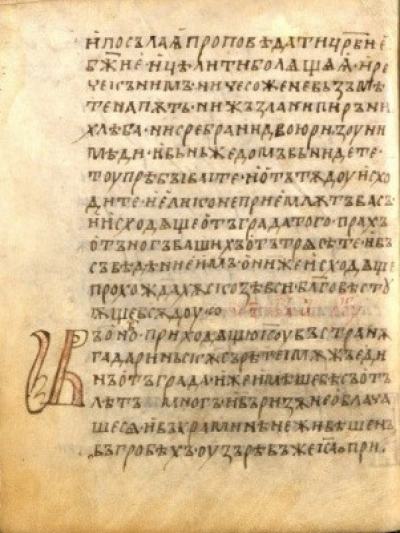 Sava’s book is one of the earliest Cyrillic written monuments. It contains a collection of gospels (aprakos: the weekly church readings starting from the Holy (Easter) Week) from different periods on a total of 166 parchment folia, 129 of which have survived from its most ancient Bulgarian part – they are located in the middle of the book – from folio 25 to folio 153, with noticeable deficiencies. Its last part (f. 166) is also Bulgarian, from around the 11th century. The other parts of the transcript have been supplemented twice in the following centuries in Russia (11th–12th and 12th–13th centuries), but there were also missing parts. The text is arranged on small folia, format 4°, 17 x 130–140 mm, and the written area itself is 130 x 90 mm. The font is an ancient uncial script, an early form of the Cyrillic alphabet, with some traces of the Glagolitic script. The handwriting is slightly sloping to the right, visible in places. The simple decoration consists of zoomorphic, plant or geometric initials and ending borders decoration. The manuscript has numerous corrections and later additions, glosses and drawings from different centuries. From the field note on f.1b it is understood that in the 17th century the monument had been in the Seredkino Monastery near Pskov. From there it was transferred to the Synodal Printing House in Moscow. Following the October Revolution in 1917, this manuscript, along with the other items of the Synodal Printing House, was transferred to the Russian State Archive of Ancient Acts (RGADA), where it is preserved to this day (Fund 381, No 14).

The transcript owes its name to two additions, presumably contemporary to the main text, in which the name of priest Sava is read on folia 51a and 56a. It has been suggested that he had been the copyist of the gospel or its owner. As early as the 11th century, the folia from 152 to 163 were lost. They were replaced with new pages, also the work of a Bulgarian writer, but his handwriting testified to a completely different schooling and literary practice. The authority and significance of the monument suggested that it be constantly supplemented, which had led to its diverse linguistic and graphic composition. The different layers, handwritings, as well as contents, have given scientists reason to divide the monument into four main parts:

The book had been completed in this way for purely practical purposes. The lack of lavish decoration, which is functional rather than decorative, as well as the unpretentious handwriting, suggest that it was used for everyday individual reading.

Despite the different temporal distances of the parts of the monument, common of all its parts are the same features of the Cyrillic uncial script. In Sava’s book used are 44 letters for 36 sounds, namely а, б, в, г, д, е, ѥ, ж, з, и, і, ї, к, л, м, н, о, п, р, с, т, ѹ, ꙋ, ф, х, ц, ч, ш, щ, ъ, ы, ъї, ь, ѣ, ю, ꙗ, ѧ, , ꙙ, ѫ, ѭ, ѡ, ѳ, у. The letters ѯ and ѕ are used only as numerical designations; the шт combination is not used, with one exception of the ligature шⷮ on folio 65а – имѫшⷮюмѹ. The ligature оⷮ on page 134b has been identified only once, probably due to an error. Individually in the titles ѿ is found, as for example, on folio 64b. The letter ѱ is also not found in the manuscript, although in the marginal note on f. 51a it is used once: поⷫ сава ѱалъ. The vowels of jers are generally written in their etymological places, although the postpositioned vowels are preserved in most of the cases, whole those in a weak position are often omitted. The use of epentetic л is inconsistent.

As the morphological features go, the following should be noted – the frequent use of supine, the presence of both a simple aorist and consistent use of a second sigmatic one in verbs with a consonant infinitive. There are 14 cases of ть ending for the 3rd person plural, in present tense.

Numerous scientists have worked on the monument, on its origin and peculiarities and many works have been published, but the problems of its peculiarities still are not fully clarified. A number of issues still remain controversial, such as what exactly had been the role of Priest Sava or to what period of time can the individual parts of the manuscript be dated with the greatest certainty. The book was found in 1866 by I. I. Sreznevsky, when it was in the library of the Moscow Synodal Printing House. He has given the name of the manuscript and made the first publication on Sava’s book. He dated it to the 11th century, but later V. Jagić (1881) made corrections to his announcement and temporal positioning. The first edition of the book, accompanied by a description and several photographs, was made by V. N. Shchepkin in 1903. In later times it underwent numerous corrections and reviews. Shchepkin’s are also the first in-depth studies on the composition, its material, the handwriting and linguistic features of the monument. He pointed out some errors caused by the Glagolitic background. At the same time, he defended the view that the book was a recent transcript of an early Glagolitic gospel. A. Leskin focused mainly on the use of jers (Лескин 1905), while I. Barbulescu (Бърбулеску 1937) and E. Vrabie (Врабие 1971) elaborated on its origins – the former defended the Dacian genesis of the book, while the latter refuted this opinion. Their opinions were based on linguistic observations mainly in the field of vocabulary. According to G. A. Ilinski (Илински 1908), the manuscript was brought by monks to Russia after a stay at Mount Athos, but his idea cannot be proved. V. Pogorelov worked mainly on the morphological features of the manuscript and supported the theses of Shchepkin (Погорелов 1927), while K. Horalek (Хоралек 1948) developed an analysis of its linguistic history in the context of the early evangelical monuments. I. Tot wrote a dissertation on Sava’s book and emphasized the Bulgarian character of the protograph of the monument. It was later confirmed by publications of O. A. Knyazevska (Князевская 1998 and 1999), which is another evidence of the intensive literary interaction between the South and East Slavs. V. Vondark, E. F. Karsky, P. A. Lavrov, N. M. Karinski, A. A. Pokrov, S. Kulbakin, V. Pogorelov, S. Mladenov, B. Tsonev, B. Velcheva, E. Uhanova, E. Dogramadzhieva and many others have also contriuted with their publications and view to tackling the issues of the monument. Sava’s book continues to excite scientists and work on various aspects of the monument is forthcoming.

The 20th century saw the processing of the monument to ensure its preservation – initially with a change of the cover in the1950s, and in the period 1988–1991 it underwent a major restoration, for which purpose it was unfolded, its folia were purified with detergent and rearranged, glued in places to prevent future damage, after which the book was rebound and provided with new cover. Despite good intentions, this restoration effort violated the correct order of the folia, leading to their thinning and darkening, and made the reading of the notes and later layers of the codex difficult.

View the embedded image gallery online at:
https://sesdiva.eu/en/virtual-rooms/medieval-written-heritage/item/135-sava-s-book-en#sigProId2030368402
back to top