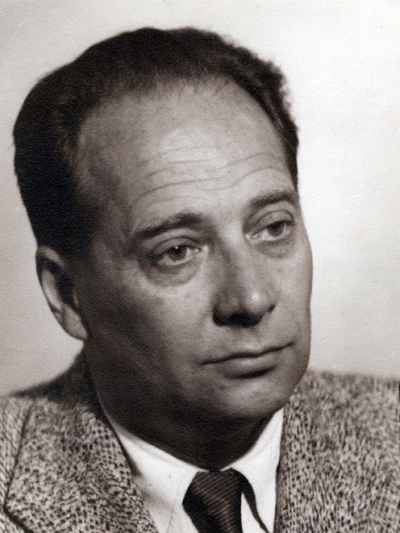 A Russian and Bulgarian poet, writer, translator and philologist. He was the author of over 180 translations of Bulgarian literary works into Russian.

A Russian and Bulgarian poet, writer, translator and philologist, Valentin Arseniev was born in Kharkov but lived in Bulgaria since 1922. He graduated from the Elevation of the Cross Russian high school in Peshtera. V. Aresniev’s name as a poet was first heard in the early 1930s when his first poems in Russian were published. He also collaborated translations of Russian writers to the Vedrina, Kormilo, Echo and Nova Kambana newspapers. Arseniev also translated works of Bulgarian writers and poets of the time into Russian. He and Kira Pehlivanova were the authors of two volumes of readings for those who wanted to study Russian. He assisted Sava Choukalov and Marko Marchevski in compiling their dictionaries. After 1944 he worked at Radio Sofia, the Svobodnaya Bulgaria newspaper, the BTA news agency, and others, working towards acquainting Russian-speaking radio audiences and readers with the literature, history, economic and cultural life in Bulgaria. School books on Russian literature for various grades, which underwent numerous editions, also date from that period, as well as two volumes with short stories and essays, and publications in newspapers and magazines. Valentin Arseniev passed away in Sofia.

A poet and writer of short stories and essays, Valentin Arseniev’s main creative efforts were focused on the noble task to present the achievements of Bulgarian literature to the world, to which end he translated into Russian classical and contemporary works. He was the author of over 180 translations of Bulgarian literary works into Russian. He translated numerous works of Bulgarian classics and writers who were his contemporaries. Suffice it to mention several names and titles to get an idea of his creative scope: Novelettes and Short Stories by Ivan Vazov, Balkan Legends Yordan Yovkov, Short Stories and Novelettes by Elin Pelin, works by Tsani Ganchev, P. Y. Todorov, Alexander Zhendov, Anton Strashimirov, and Orlin Vassilev. Writers from the second half of the 20th century were also included – Pavel Vezhinov, Nikolai Haitov, Bogomil Rainov, Andrei Goulyashki and Serafim Severnyak, among many others. Then again, special attention was paid to translations of poets like Hristo Botev, Hristo Smirnenski, Nikola Fournadzhiev, Penyu Penev, Vesselin Andreev and Andrei Germanov, as well as pieces by Dimcho Debelyanov, Geo Milev, Nikola Vaptsarov, Elisaveta Bagryana, Dora Gabe, Vesselin Hanchev, Ivan Peichev, Damyan Damyanov and Bozhidar Bozhilov, as well as ones by Valeri Petrov, Liliyana Stefanova, Stanka Pencheva and Lyubomir Levchev, among many others.

In 1968 Arseniev wrote: “A translator is actually a co-author, an ambassador plenipotentiary of His Majesty the Author at [the court of] His Majesty the Reader to whom he presents his translation instead of his credentials and with whom he converses on the name of the one he represents. The well-known phrase that ‘a translator is an artist’ means that he must be able to convey the specific characteristics of the age during which the events are taking place, choose the most appropriate means to outline the speak style typical of the heroes and overcome idiomatic difficulties. In other words, he or she should give the reader a translation equal to the original, i.e. a work of literature bearing an emotional and cognitive charge identical to that of the original.” These words are the quintessence of his credo as an author.

View the embedded image gallery online at:
https://sesdiva.eu/en/virtual-rooms/russian-immigration-balkans/item/12-valentin-panteleevich-arseniev-nechaev-en#sigProId771a23ea9e
back to top