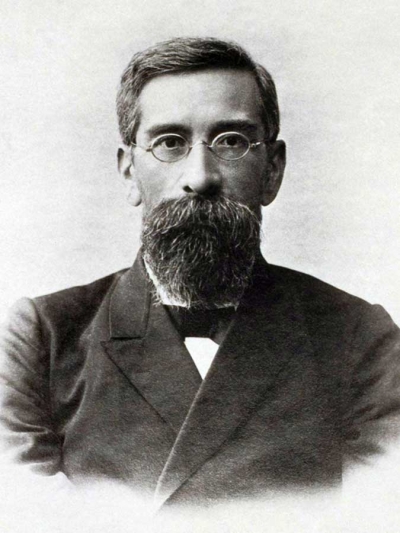 Russian historian of Byzantine and Old Russian art, archaeologist, inventor of the iconographic method for the study of monuments of art.

Kondakov was born in the village of Ruskaya Khalan, Novooskolsky District, Kursk Governorate (guberniya). In the period 1861–1865 he studied at the Faculty of History and Philology of Moscow University under the tutorship of Fyodor Buslaev. After graduation, he taught at secondary schools, including at the Moscow Art School. In 1873, he defended a master’s thesis at the University of Moscow on ‘A monument with harpies from Asia Minor and the symbolism of Greek art’. In 1876, he defended his doctoral thesis on ‘The history of Byzantine art and iconography in miniatures from Greek manuscripts’.

Kondakov emigrated to Constantinople in 1920 and then to Sofia. In 1920–1922, he lectured on medieval art and culture at Sofia University and studied monuments of art in Bulgaria. In Odessa and in Sofia Nikolay Okunev and Andrey Grabar studied under his tutorship. From 1922, Kondakov lived in Prague, where he taught at Charles University until his death in 1925. The circle of young scientists, known as Seminarium Kondakovianum, who had united around him, in 1931 was transformed into Kondakov Archaeological Institute.

In 1895, together with Fyodor Uspenski, Kondakov founded the Russian Archaeological Institute of Constantinople, whose goals included the study of Macedonia. He published his studies in the book Macedonia. An Archaeological Journey (1909), dedicated to the history, archaeology and ethnography of Macedonia. In addition to the description of the archaeological monuments, Kondakov published his studies on the folk costume of the Macedonian Bulgarians, mainly on its ornamentation and colours. He believed that in ethnographic terms Bulgaria extended to Macedonia, including Ohrid.

Kondakov’ works contain a wealth of factual material with important studies on the relationship between Byzantine and ancient Russian art, and on the development of various iconographic types. He developed a method for the analysis and dating of monuments of medieval art. He also researched archaeological sites in the Bulgarian lands. The unique edition Byzantine Enamels. From the Collection of A.V. Zvenigorodsky. History and Monuments of Byzantine Enamel (1892) is kept in the Central Library of BAS. It was donated to the Bulgarian Academy of Sciences by the author himself, Academician Nikodim Pavlovich Kondakov, who lived in Bulgaria from 1919 to 1922, and was a professor at Sofia University and a Foreign Member of the Bulgarian Academy of Sciences. The book was a gift in gratitude for the deep respect, the special attention and the warm hospitality he experienced in Bulgaria.

View the embedded image gallery online at:
https://sesdiva.eu/en/virtual-rooms/russian-immigration-balkans/item/27-nikodim-pavlovich-kondakovp-en#sigProId0876fd1c45
back to top