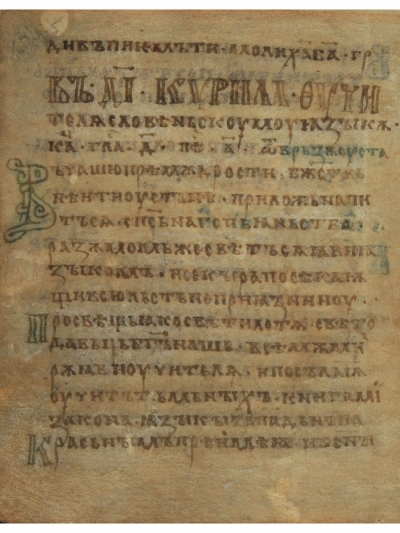 The earliest preserved, relatively intact, Slavic festive (or rather selective) menaion (Trefologion), ancient Russian in origin, most probably transcribed from an Old Bulgarian antigraph. It contains offices for the autumn half-year, supplemented by separate offices for July and August. In terms of structure, composition and content of offices, and language, the manuscript demonstrates a number of unique or rare features.

The manuscript is kept in the collection of the Synodal Typography (F. 381) in the Russian State Archives of Ancient Acts, under number 131. A whole of 147 parchment folia have survived from it, with some missing in the middle, and an illegible end. Elijah’s Book was named after the name of his copyist Elijah, who had left a note on f. l.136v. I. Sreznevsky has traced its dating to be around 11th–12th century; in the Summary Catalogue of 11th–13th c. entury manuscripts it is dated to the 12th century (No 76), while in the most recent studies its dating has been shifted to the last quarter of the 11th century (See Ладыженский 2015: 49–121, and the bibliography cited) . On the basis of the toponym имоволожи mentioned by copyist Elijah, the codex has been localized around the Imolozhie Lakes in the Gornovolotsk district of Tver region (Ильина книга 2015: 122–134 and the bibliography cited).

The manuscript was introduced to science by I. I. Sreznevsky as early as 1867, but it was only in the last three decades that it became the focus of research interest in the field of paleoslavistics. It has been published twice, with editions based on a different editor’s concept. The edition of V. Krysko (Крысько, В. 2005) includes a critical edition of text with Greek parallels from printed and manuscript sources, a rich critical part with parallels from ancient Russian, Bulgarian and Serbian manuscripts, which testifies relatively well to the place of offices in Elijah’s Book in the history of medieval Slavic menaion, and a Slavic-Greek directory of lexemes. In addition published have been a volume of studies on different aspects of the manuscript, a Greek-Slavic index of lexemes, a catalogue of misspelled lexemes reconstructed on the basis of other transcripts, and an incipitarium of the newly-found Greek parallels (Ильина книга 2015) have been published. E. Vereshtagin’s (2006) edition includes a phototypical presentation of the manuscript, typed text, accompanied also by Greek parallels, but only from print editions, and a thorough theological and philological commentary.

The codex is written in a not very elegant handwriting and is characterized by a very modest decoration (double-contour, mostly black initials and borders without ornament or with a simplified interlace design work, rare use of cinnabar). Two types of notation were applied to individual text fragments by a later scribe. Completely with neumes (unheightened cheironomic neumes) of a markedly archaic type of notation are the canon of Exaltation and one sticheron about St Christina, and above three chants (two sticheron and one troparion from a canon) a θ-notation is placed.

Some specific peculiarities ensure for Elijah’s Book a unique place among Slavic hymnographic written monuments. Since it comes from a direct Old Bulgarian antigraph (or carefully reproduces the features of an Old Bulgarian protograph), the manuscript is a key source for casting light on some issues in both the historical grammar of Russian language, and in Old Bulgarian literary language, as well as in the Old Bulgarian hymnographic corpus and liturgy. The language and spelling reflect a conservative system and stand out with ancient phonetic, morphological and lexical features; while the dictionary provides an abundance of Greek borrowings (Верещагин 2006: 298–305), rare lexemes and hapax legomenon (over 120 unknown words until the text was published, see Крысько 2015: 38–48).

There is disagreement about the sources that had served to compile Elijah’s Book. After the office for the Presentation of Jesus at the Temple, there appears an indication въ сѫ(б). а҃. не(д). поста. (at the end of f. 125v, after which a part the codex is missing, probably one quire or more), referring to St Theodore Teron, worhiped precisely on the first Saturday of Lent. Therefore, some scholars tend to believe that in its original form, the manuscript has included selected offices not only from the Menaion but also from the Triodion (E. Верещагин, N. Trunte). According to another opinion, the instruction marks the second date for church worship of this saint, 7 February, in the early calendar tradition. Rather, it serves to indicate to the user of the manuscript that the office for St Theodore Teron should be taken from the Triodion. The composition of the codex has been formed either by a selected menaion, supplemented by chants from stichera (Станчев), or by a selection of daily office menaion (Христова-Шомова).

Elijah’s Book belongs to a limited group of hymnographic miscellanies, whose structure follows a markedly archaic arrangement, with displaced short chants (stichera, kathisma) after the canon. It also displays another rare compositional feature – the presence of Beatitude troparion (verses performed after the Gospel verses of the Mountain Sermon, Мт. 5: 3-12) for the offices of the fixed circle (Nativity of the Theotokos, Elevation of the Cross, Christmas, Baptism of Jesus, Dormition of the Theotokos), wherein features of the Old Bulgarian liturgical tradion from the late 9th and the early 10th centuries are seen. In this aspect, the manuscript isimportant evidence to the stage of worship that preceded the liturgical reform of Theodosius of Pechersk, related to the introduction of the Church Charter of the Constantinople Monastery of Saint John the Forerunner at Stoudios in Kievan Rus (c 1068).

Overall, Elijah’s book reflects the condition of the Old Bulgarian menaion works before the creation of the full 12-volume set of offices for each day. The manuscript contains original chants of the disciples of Cyril and Methodius students: cycles of anonymous alphabetical stichera for the pre-feast of Christmas, the Canon for St Demetrios of Thessalonike for the 4th mode, inc.: Отъ мьглꙑ лютꙑѩ и невѣдѣниꙗ (whose authorship is traditionally attributed even to St Methodius), the canon for St Michael the Archangel for the 2nd mode of a supposedly originating from an untranslated source, inc.: Просвѣщьи оумꙑ древлѥ (discovered and published by E. Vereshtagin in 1998) and the office of St Constantine Cyril the Philosopher (first published by Pavel Stefanov in 1993). Added to them is an abridged office (without canon) for Russian saints Boris and Gleb (one of the oldest transcripts), which is made up of adapted chants for the Peter and Paul the Apostles, St Basil the Great, etc. (Крысько 2015: 168–183). Elijah’s Book has been repeatedly used in textual studies of the original chants and individual translated offices or canons: for the Exaltation, for St Clement of Rome, for St Barbara, the Sunday of the Holy Fathers, for the Massacre of the Innocents, the Sunday after Christmas; for Christmas – with the earliest Old Bulgarian translation of the canon of St Cosmas of Maiuma (Попов 2007: 298–315). The ancient language style and the translation features of the texts show that Elijah’s Book had been compiled based on early translations made by the disciples of Cyril and Methodius in Bulgaria. In terms of language and composition, the manuscript stands close to the archaic South Slavic representatives of the Menaion, such as the Bulgarian 13th-century Skopje Menaion (National Library of Sts Cyril and Methodius, 522), and the Serbian menaion, State Historical Museum, Moscow, Khludov’s Collection, No.164 from 1371–1385, and State Historical Museum, Khludov’s Collection, No. 166 from the mid-14th century. In some cases, Elijah’s Book is the only surviving witness to the original Old Bulgarian version of the text (for example, the offices for St Anastasia o Rome and St Clement of Rome).

View the embedded image gallery online at:
https://sesdiva.eu/en/virtual-rooms/medieval-written-heritage/item/154-elijah-book-en#sigProIdaea5cc0e25
back to top