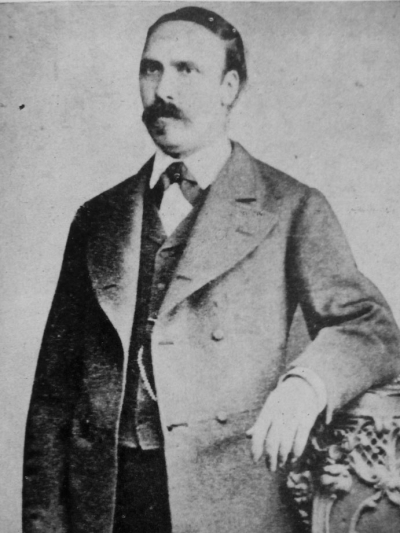 Born into the family of a priest in Shumen, he studied at a Shumen school and then at a French college in Constantinople (1856-1858), after which he worked as a teacher in his native city, where he organized theatrical performances, created an orchestra, wrote dialogues, poems of a patriotic and didactic nature, textbooks. In 1864 Voynikov emigrated to Romania, where two years later he created the first permanent Bulgarian theater troupe, for which he himself formed a repertoire. He founded the newspaper Dunavska zora (“Danube Dawn”, 1867).

Voynikov’s first publication – Zbirka ot razlichni sȃchineniya (“A collection of various essays”) – dates back to 1860. After eight years in Braila, two collections of his poems were published: Pesni lyubovni, horovodni, swatbeni i smeshni (“Songs of love, dance, wedding and funny”) and Razni stihotvorenia (“Various poems”). Voynikov was the author of the first significant works of national drama of mainly historical content. In Bulgarian theater of the Bulgarian national revival era, the plays staged were mostly historical. As the “father of the Bulgarian theater,” Voynikov wrote in the article “Bulgarian theater”: “when people start visiting their national theater, where they see a living image of the deeds from their glorious past, the historical exploits of their forefathers and hear their thoughts in live speech, where they gain an idea of ​​the spirit, talents, inclinations, and abilities of their ancestors, who so worthily glorified the name of their people, then they realize the need for national revival and the importance of national development”.

Infused with patriotic ideas, the plots of Voynikov’s historical dramas, Stoyan voivoda (1866), Princess Rayna (1866), Pokrastvane na Preslavskiya dvor (“Baptism of the court of Preslav”, 1868), Velislava (1870), Vaztsaryavanieto Krum Strashniya (“Ascension to the Throne by Krum the Terrible”, 1871), Desislava (1874), and Frosina (1875), transported the audience to the most important events in the history of the country, most often to the periods of struggle for national liberation against foreign invaders. His heroes, carriers of the idea of national independence, are, as a rule, the statesmen and cultural figures of old Bulgaria, fearless and majestic, generous and noble. The images of the conquerors encroaching on the freedom of the fatherland are always sharply negative – these are typical theatrical villains, insidious, power-hungry, cruel. In the dramas of the writer, educational and romantic components were combined in a peculiar way. His plays gained their widest popularity in the 1860s and 1870s. “Princess Raina” in particular was a resounding success; it represented a reworking of the novel, “Raina, the Queen of Bulgaria” (1843), by the Russian romantic A. F. Veltman. During the April uprising of 1876, impressed by watching the play “Princess Raina”, residents of the city of Panagyurishte called a local teacher named Raina Popgeorgieva “Princess Raina”, for she, in secret from the Turkish authorities, embroidered a velvet banner with the motto: “Freedom or death!”

Understanding that the historical plays of Voynikov were contributing to an intensification of the Bulgarians’ struggle for national liberation, the Turkish authorities often banned their productions. Voynikov often seemed to be a romantic who idealized the national past, but at the same time he showed a penchant for realistic portrayal. He created texts in which modern mores were castigated (the satirical play – Lozhnorazbranata tsivilizatsia (“The Misunderstood Civilization”, 1871) and ridiculed ignorant people who blindly imitated foreign fashion – Poyevropeichvane na turchin (“The Europeanized Turk”, 1876) and Dimanka ili verna prvninska lyubov (“Dimanka, or fidelity to a first love”, 1876). In his journalism, Voynikov urged his compatriots to fight, denounced the Turkish enslavers, and welcomed the Bulgarian rebels. He also acted as a literary critic, publishing reviews of poetic and dramatic works. The writer also showed an interest in folklore and collected and popularized Bulgarian songs, proverbs and sayings.

View the embedded image gallery online at:
https://sesdiva.eu/en/virtual-rooms/national-revival-of-slavs/item/148-dobri-vojnikov-en#sigProIdb06358fe75
back to top