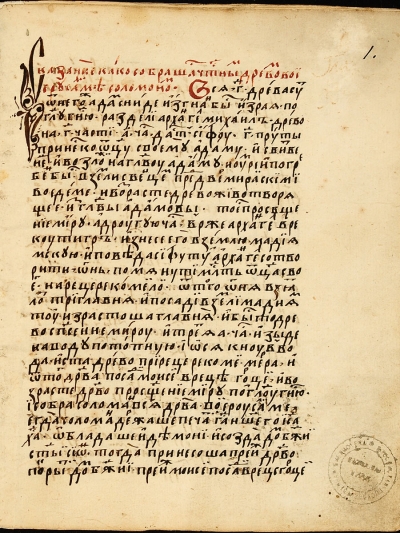 In Russian literature in the 16th–17th century, there has been an increased interest in apocryphal works and in texts of legendary content and it stemmed from the literary and ideological trends characteristic of the era.

The penetration of apocrypha and apocryphal compositions into Russian miscellanies of various content, whose translations or revisions had originated in medieval Bulgaria in earlier periods, has been known to researchers since the 19th and early 20th centuries (Тихонравов 1863; Начов 1894; Сперанский 1898; Яцимирский 1914; Яцимирский 1921; Пенев 1932 et al.). Researchers’ interest was mainly focused on philological analysis and publication of individual works, but the relationships between the texts of the apocryphal works and their environment, their organization in cycles, as well as the overall composition of the miscellanies have remained unknown. The way they have reached the Russian lands was not explored. In the 20th century, the publications of the so-called Russian readable-collections (Дмитриева 1972; Копреева 1976) and the miscellanies of writer Efrosin (second half of the 15th century) (project: Энциклопедические сборники XV века книгописца Ефросина — “Леонардо да Винчи Древней Руси) contributed significantly in this respect.

The range of manuscripts listed can be extended to dozens of other miscellanies, including apocrypha and short stories of South Slavic origin. Generally, three basic structural models can be identified in the content of the miscellanies. The first one has an apocryphal ‘core’ that comprises the original editions of the following works: the Apocryphal about Adam and Eve, the series of stories about Abraham, the series of stories about the Holy Tree attributed to Gregory the Theologian, the Apocryphal about Samson, the Story about Prophet Sibyl, and others. The combination between the story of how the Psalter was written (the Psalter in the Sea) and the story of the writing of the Gospel, about Apostle Thomas and St Panagia, about Prophet Samuel, about the origin of the wood-nymhs, is found only in this structural model. Eight of the listed Russian manuscripts from the 16th–17th centuries are referred thereto: No 363, f. 272; No 794, f. 304; No 565, f. 310; No 32, collection of A. I. Khludov; No 1457, collection of E. V. Barsov; No 214, Collection of the Archaeographic Commission; No 1309, f. 583; No 1938, f. 583. Probably a Bulgarian archetype containing several layers had been at the heart of the composition – the earliest one, formed in the 10th–11th century; another one characterized by some editorial amendments in the text of individual writings (eg, in the Apocryphal for Abraham’s death, in the stories for the writing of the Psalter and the Gospel, in erotapokriseis, etc.). There is yet another layer, the last one, relating to the 14th century, which includes new translated and original works. This layer was known to Russian writers in the 15th century, as seen as can be seen from the miscellanies of writer Efrosin (Милтенова 1987: 147–154). Among the manuscripts, of interest is the convolute No 794, f. 304, in the second part of which (f. 179–404) the apocryphal core is fully presented: the Apocryphal about Adam and Eve, the apocryphal series of stories about the Holy Tree, the full series of stories about Abraham, to mention but a few. Some South Slavic features have been preserved in the language and spelling. The miscellanies Nos 1309 and 1938 of the collection of M. P. Pogodin are voluminous literary miscellanies of extraordinarily rich content, in which, along with the numerous Russian fiction works, a number of Bulgarian apocryphals have been found – parts of the series of stories about Abraham (including the apocryphal about Melchizede ), the apocryphal about Jacob and his sons, parts of the Gospel of Nicodemus (Epistle of Pilate to Tiberius, Martha and Mary in Rome), the Story about Adam and Eve, the apocryphal series of stories about the Holy Tree, and more. No 1938 included the Revelation of Baruch, Father Agapios travel to Paradise, Sermon/Homily/Story about Samson, etc. The collection has been compiled according to a thematic principle, with apocrypha supplemented by excerpts from the Palaea Historica. It can be assumed that the ‘core’ of the works had transcended from the Balkans in the Russian tradition around the late 14th and the early 15th centuries.

The second structural model is characterized by editorial changes in the text of the apocryphal works. The following manuscripts may be included here: No 1, f. 173 IV; No 886, f. 583; No 1615, f. 583; No 173, f. 299; No 637, f. 310; No 3855, f. 178 and No 1368, f. 583. The second structural model had taken shape in a later era, when the text of the apocrypha in the ‘core’ of the first structural model was revised, e.g. the series of stories about Abraham, about David and Solomon, and about the Holy Tree. Contained herewith are also original and compilation works dating back to the time of the Byzantine rule of the 11th–12th century and from the late 12th and early 13th centuries: Story about Sibyl, Erotapokriseis. Razumnik-Ukaz (question-answer essay), Legend of Thessalonike (Solunska legenda), The prophet Isaiah’s story, etc. (Тъпкова, Милтенова 1996). The contents were enriched with new translation and compilation works: the Story about the old Alexander (about the Trojan War), the stories about Aesop, several typical stories from Patericon and more. Of interest is e.g. manuscript No 173 from the collection of N. S. Tikhonravov from the 17th century, which has preserved traces of a Bulgarian protograph (traces of mixing the nasal sounds, postpositioned definite article, etc.). It contains part of the apocryphal series of stories about the Holy Tree (how the three parts of the tree had come together in Jerusalem, the story about Adam’s head), a brief sermon on the benefits of reading, Revelation of Baruch, Erotapokriseis. Razumnik-Ukaz, story on the writing of the Gospel, the apocryphal Story about the twelve dreams of king Shachinshahi, the apocryphal Story about the twelve Fridays (short version), Solomon and Kitovras, etc. A characteristic feature of the second structural model is not only the secondary editing of the story for the Holy Tree, but also its third, last revision, in which the text of the series is fused with the apocryphal about Adan and Eve in the second version. This combination is found in the Russian miscellanies No 886, No 1615 and No 1368 of M. P. Pogodin’s collection, No 637 of V. M. Undolski’s collection and No 3855, f. 178 Russian State Library, Moscow. There is an assumption that the revised text had penetrated via the Moldovan tradition (Милтенова 1983: 51–58). A striking example of the codification of the second structural model is the series of stories about the Holy Tree in manuscript No 3855, f. 178 of the 17th century. After the story about the writing of the Gospel (first edition), there stands the series in the third edition, Revelation of Pseudo-Methodios of Patara, the Confession of Eve, immediately after it transcribed is the beginning of the second edition of the Story about Adam and Eve. The Russian writer has supplemented the text he considered missing by using the Bulgarian-by-origin version of the work. The second structural model is even more clearly seen in manuscript No 1368 of M. P. Pogodin’s collection where the following are present in a sequence: the second edition of the apocryphal story about Adam and Eve, the third edition of the series of stories about the Holy Tree, part of the vitae of the Holy Virgin, the Homily on the Apostle Thomas and St Panagia, part of the Gospel of Nicodemus (Martha and Mary in Rome), the story on how the Psalter was written, etc.

There is also a third structural model, which can be defined as contaminated, since in its ‘core’ there are works in their editions from the first and the second alike. It illustrates that Russian men-of-letters had used texts from several sources.

The structural patterns identified in the composition of Russian medieval miscellaniess testify to the continuous connection between the South and East Slavic literary traditions. Close contacts in the field of local popular literature have existed since ancient times. Thanks to the ‘export’ of apocrypha from the Balkans to Russia, not a few texts of great importance for the restoration of the common Slavic fund of apocryphal works have been preserved. Some works are preserved exclusively in Russian transcripts, e.g. the Apocrypha about the Tiveriad Sea – a valuable source of Bogomil literature, as well as the essay О всей твари [On all creatures]. Examining the Russian miscellaniess, R. P. Dmitrieva (1972) substantiated the demand on the part of Russian writers for South Slavic para-Biblical works with the activation of heretical currents in the 16th and 17th centuries, on the one hand, and on the other hand, with an interest in secular literature. The apocrypha were readily used by the compilers, as they were written in a simple and comprehensible manner, with many curious details and interesting plots. In most cases they were not interpreted as works that contradict the canon. Thus, the Story of the Holy Tree, attributed to Gregory the Theologian – one of the most popular works (there are more than 60 Russian transcripts), was included in the Great Reading Menaion of Metropolitan Macarius under the date 30.06 (Евфимий 1847: 77). In the same VI volume of the Great Menaion the Revelation of Pseudo-Methodios of Patara, which has a long history in Russian literature, is included under the date 20.06.

Some works owe their wide spread to the fact that they were in line with the political ideas of the period. Such a reason can be admitted for the Erotapokriseis. Razumnik-Ukaz (more than 10 Russian transcripts are known). In the first version the enumeration of the three kingdoms in the Orhodoxy are Greek, Bulgarian and Iveran (Georgian), whereas in the second they are Greek, Bulgarian and Alemanian (German). In this way the Bulgarian state raised its claim to the Byzantine heritage in the sphere of Orthodoxy. In russian copies the third is Moscow (the Muscovy state). There is sufficient argument to assume that such a text had served as a source for monk Philotheos for his message to Prince Vasili III of Russia in 1524 (Pope 1974: 141–153; Pope 1975: 246–253; Тъпкова-Заимова, 1983: 27–38). If this interpretation is accepted, it would be a further proof that the Bulgarian apocryphal works that had penetrated were organically incorporated into the official ideology of the Muscovy state.

View the embedded image gallery online at:
https://sesdiva.eu/en/virtual-rooms/cultural-exchange/item/72-apocrypha-and-apocryphal-series-of-probable-bulgarian-origin-in-the-russian-readable-collections-from-the-16th-17th-centuries#sigProId6e329a6187
back to top