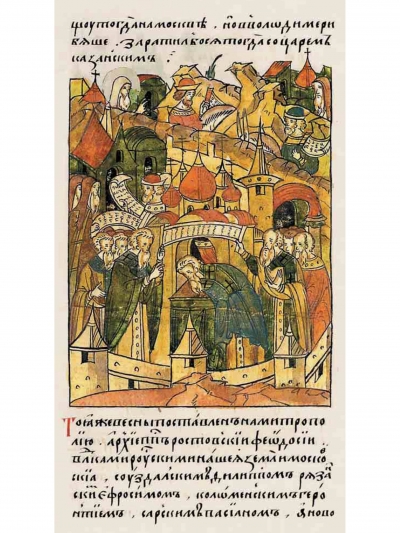 The Story about the Establishment of the Bulgarian and Serbian Patriarchates is a work created on Russian soil around 1460–1461; it is included in the legal collection known as Кръмчая [Kormchaya].

The text of the essay is thematically divided into four parts. The first traces the early history of the Christian religion, and the emergence of the Roman and Constantinople churches. The second part is dedicated to the restoration of the Bulgarian Patriarchate. The name of the Bulgarian ruler is not mentioned, but it is clear that the time referred is the recognition of the Church as a Patriarchy in 1235 under Tsar Ivan Asen II (1218–1241). The fact that the Bulgarian Church was recognized by the Patriarch of Constantinople is emphasized. The third part of the work tells about the establishment of the Serbian Patriarchate and the real historical facts are intertwined with legends. The recognition of the Serbian Church as a Patriarchy in 1346 is briefly described, as is the subsequent coronation of Stefan Dušan (1331–1355) as king. The last part briefly describes that patriarchs were raised in the same way among the Ibers (Georgians) as well. The information about the Bulgarian and the Serbian Churches is presented in a similar way – it tells about the people’s conversion to Christianity, about the relations with the Greek (Byzantine) clergy and about the establishment of autocephalous churches.

The story is known only from Russian copies, about 30 in number, included in the Kormchaya collection. All transcripts originate from the Northeastern Russian lands. The oldest ones are the Vyaznikovsky copy (Vyaznikovskiy regional museum of local lore, No 1053) and Sofia copy (Russian National Library, Sof. 1173), dated to 1460–1461. In the 13th century, St Sava’s Nomocanon, a Slavic transcript of the Byzantine collection made in Serbia, transcended in the Russian literature under the title of Кръмчая в 70 глави [Kormchaya in 70 Chapters]. In the 14th–16th century period, six editions of the collection were made on Russian soil. Around the mid-15th century, the so-called Sofia edition was probably compiled in the Kirill-Belozersky Monastery. It includes as an introductory article the Story about the Establishment of the Bulgarian and Serbian Patriarchates. The essay is also contained as a concluding article in Vasian Patrikeev’s Kormchaya and as an introductory article in Nikiforov’s Kormchaya. In 1653, a printed edition of the legal collection was published, based on the so-called Synodal Code, known as Nikonov’s Kormchaya. It contains an abbreviated and revised version of the Story about the Patriarchates.

There are also two copies of the Story, which are in anti-Latin collections – a convolute from the end of the 15th and the early 16th century (Russian National Library, Sof. 1465), written most probably in the Kirill-Belozersky Monastery, and a collection from the 16th century (State Historical Museum, Syn. 561). Both are specific for the fact that they contain only information about the Serbian and Iberian Patriarchates.

So far, several copies of the Story have been published. For the first time an excerpt from it was published by G. A. Rosenkampf in a 15th century manuscript (Russian State Library, Rum. col. 256, No 231). In 1859, P. R. Slaveykov published the work after the printed edition from 1653. A. Vostokov published a short excerpt from the collection used by Rosenkampf. Later the story was published by B. S. Angelov and by E. Belyakova.
In science, different opinions have been expressed about the origin of the work. B. S. Angelov suggested that the Story originated in the 16th century. Unlike him, Ya. N. Shtapov assumed that it was created around 1414–1415 in connection with the appointment of Gregory Tsamblak as Lithuanian Metropolitan. Shtapov suggested also that the story was written at Mount Athos, and its author was from the Balkans, most likely a Serb. V. Gyuzelev attributed its compilation to the late 14th– early 15th century. He identified some common features of the Story and the Zograf Monastery Chronicle hence he suggested that the work was created in this monastery by a Bulgarian monk.

Studies prove that the Story about the Establishment of the Bulgarian and Serbian Patriarchates was compiled on Russian soil around 1460–1461. Its appearance is associated with the establishment of an autocephalous Russian church. In 1461, the All-Russian Metropolitan Jonah (1448–1461) died, and he was succeeded by Theodosius Bivaltsev (1461–1464), Metropolitan of Rostov. He was elevated by Russian bishops without the participation of the Patriarch of Constantinople Gennadius Scholarius (1454–1464) and sanctioned by Grand Prince Ivan III (1462–1505) instead by the Patriarch of Constantinople. The essay was aimed to justify the right of the metropolitan to be ordained by the bishops. Most likely, the Story was composed for this purpose, especially to be included in the Sofia edition of Kormchaya. E. Belyakova established that the author was a Russian writer. As maintained by A. A. Turilov, in the Story of the Establishment of the Bulgarian and Serbian Patriarchates the information about the life of St Sava has been borrowed not from a literary source, but rather from oral tradition. A connection between the work and the Story about the Restoration of the Bulgarian Patriarchate is not excluded. According to A. Nikolov, it is possible that this story was included in the Bulgarian Nomocanon, which has not reached us, but was known to Russian writers. It can be assumed that the Story about the Establishment of the Bulgarian and Serbian Patriarchates is a compilation written on the basis of historical texts that have not reached us. The factual inaccuracies therein can be explained with the distance of time and the author’s desire to adapt the texts to a current political goal.

View the embedded image gallery online at:
https://sesdiva.eu/en/virtual-rooms/cultural-exchange/item/110-a-story-about-the-establishment-of-the-bulgarian-and-serbian-patriarchates-en#sigProId3e501c2e71
back to top