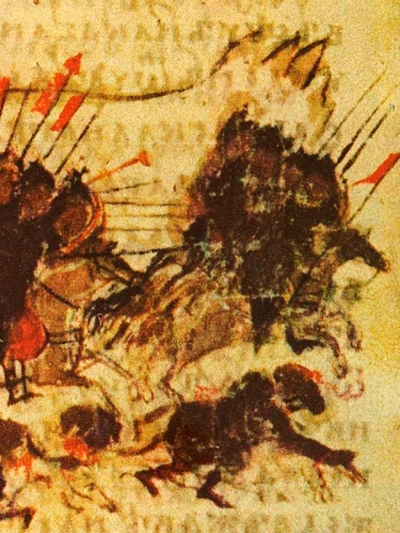 The fifteenth-century Russian Tale on Constantinople, since 1886 attributed to one mysterious Nestor-Iskinder, is a rather hybrid, lively account of the ultimate fall of Constantinople (1453) in the hands of the Ottoman Sultan Mehmed II. Mutual religious, political and historical interests led to a fruitful circulation of the Tale among East and South Slavs.

Within Slavia Orthodoxa, the (originally) fifteenth-century Russian Tale on Constantinople (Повесть о Царьграде) is a widespread text. Written in the wake of – or even partially during – the 1453 Ottoman capture of the Byzantine capital the Tale mainly tells about the fatal siege and its historical protagonists. However, the intention of the text was clearly not limited to a historiographical account of the 1453 events, as can be inferred from one of its alternative titles (see below), which also mentions the city’s “foundation” as one of the Tale’s topics.

In its largest form, the Tale on Constantinople indeed begins with a description (ca. 1300 words) of the refoundation of Byzantion, the future Constantinople, in 330 AD, by the Roman Emperor Constantine I. Far longer (ca. 8500 words), and much different, is the subsequent, mostly diary-like treatment of the series of attacks, in the spring of 1453, that finally led to the fall of the once mighty city. Here, most of the attention is drawn to the deeds of Byzantium’s last emperor, Constantine XI (Kostiantin in the text). Regularly, he speaks in direct speech, most of all in anxious consultations with ecclesiastical dignitaries, especially with the unhistorical patriarch. Now and then, Constantine enters the arena himself too, which results in some very epic scenes. From the beginning, however, there can be no doubt about the outcome of the events: because of its many sins Constantinople is doomed to fall, and the hopeful arrival of the Genoese condottiere Giovanni Giustiniani (Zustuneia) and his troops cannot save the city either. Giustiniani gets injured (which is historical) and the emperor (whose historical fate is uncertain) dies, as a true martyr, in battle. At the end, we see the Ottoman troops ravaging within the city’s conquered walls. Apart from Giustiniani and the evident protagonist, Emperor Constantine, Sultan Mehmed (Magumet) too is one of the main characters. Since the Tale is clearly written from a Christian point of view, the sultan is obviously ‘the enemy’, although he is rather feared than cursed in the text. The description of his entrance in the city on horseback and of his admiration for the Holy Sophia Cathedral is remarkably reverential. In the last and much shorter part of the Tale (ca. 400 words), we read complex predictions – based on diverse apocalyptic prophecies which then circulated in Byzantium – about the end of the Turkish rule over the city. In only one textual witness the Tale is concluded by a (contested) epilogue by one further unknown ‘Nestor-Iskinder’.

Ever since the Russian archimandrite – a high title in Orthodox monasticism – Leonid (worldly name: Lev Aleksandrovich Kavelin, 1822–1891; cf. https://sesdiva.eu/en/virtual-rooms/modern-authors/item/31-ruskoto-izvoroznanie-xix-xx) published, in 1886, the 43-page The Fifteenth-Century Tale on Constantinople (Its Foundation and Taking by the Turks in 1453) by Nestor-Iskander: After the Early Sixteenth-Century Manuscript from the Trinity Lavra of St. Sergius, № 773 (Повесть о Царьграде (его основании и взятии Турками в 1453 году) Нестора-Искандера XV века: по рукописи Троице-Сергиевой лавры нач. XVI века, №. 773), the account has been associated with this Nestor-Iskinder (archimandrite Leonid calls him “Nestor-Iskander”, although the manuscript actually reads “nestor iskinder”, “нестор искиндѣр”). In this epilogue (132 words), the Tale switches to the first-person perspective of a self-declared author who as a boy was taken captive by foraying Ottoman Turks in Southern Russia. At some point during the siege he managed to escape the Ottoman camp, whereupon he witnessed the rest of the siege, and the capture on 29 May, from the side of the Christian defenders. Basing himself upon what he saw and heard during the siege, and upon what he heard from others afterwards, he wrote his report of the events: The Tale on Constantinople. Whether the content of this epilogue is true, whether there has ever existed a historical person Nestor-Iskinder, and if so, whether he has indeed written such a report, and to what extent this resembles the text found by archimandrite Leonid in the Monastic Library of the Trinity Lavra of St. Sergius (in Sergiev Posad, some ninety kilometres northeast of Moscow, where it is now in the Russian State Library), all remain subject to scholarly debate.

Whatever the case may be, the Tale on Constantinople has a much more visible and traceable history apart from that single manuscript containing that still mysterious name of Nestor-Iskinder, a history which saw the text circulating between and among East and South Slavs. Textual criticism has proven that the early sixteenth-century manuscript with the epilogue belongs to another textual branch (the so-called ‘Iskinder branch’) than all the other – some two hundred – extant textual witnesses. The branch to which the latter belong is called the ‘chronographic branch’, because the Tale has often been included in Russian chronicles, such as the Russian Chronograph of the year 1512. The text’s success must be linked to the well-known Muscovite ideology that considered Moscow to be the Third Rome, after the first two – Rome itself and Constantinople (Nova Roma) – had fallen. Especially instrumental, for that matter, was the apocalyptic final part of the Tale, in which the city is prophesied to fall in the hands of a ‘blonde race’ (rusii rod; in some chronicles changed into ruskii rod, the ‘Russian race’).

The Serbian version of the Tale also reaches back to this rich tradition of the chronographic branch. It was translated (and somewhat adapted) in 1585 near Mount Athos by the priest-monk Vasilije. Much younger, dating from the eighteenth century, are the Bulgarian versions. These were included in the damaskini, anthologies named after the sixteenth-century Greek bishop and teacher Damascenus Studites whose works were translated and collected in Bulgarian compilations. Only one of these Bulgarian text versions, actually a translation of the first Russian printed edition of the text (1713), contains all the parts of the Tale.

As for the Slavs on the Balkans, apart from their evident concern with the relatively close, formerly Christian metropolis, one of the reasons of their interest in the Tale on Constantinople was without doubt its anti-Turkish purport. For later generations of Russians, this characteristic of the account made it a welcome instrument in support of their political propaganda against the Ottoman Empire. The above-mentioned Russian 1713 edition was printed in the context of Peter the Great’s campaign near the Sea of Azov and the river Prut, and it goes without saying that the Bulgarian translation must be connected with the growing demand for independence and the overthrow of the so-called ‘Ottoman yoke’.

We will probably never know whether the Tale was indeed written by an eyewitness in or close to Constantinople, as the Nestor-Iskinder epilogue suggests. In any case, an isolated late fifteenth-century folio preserved in Saint Petersburg (being our only textual witness from the chronographic branch, so far, that is older than the manuscript with the epilogue) teaches us that the Tale must have reached Russia early on in its tradition (that is to say, if it did not come about on Russian soil). Although the capital of the conquered Byzantine Empire was far closer to Bulgaria and Serbia than to Russia, the popular account of its final days first circulated in Russian milieus before being translated and/or adapted for specific South Slavic audiences. This very ‘detour’, of a text dealing with the fate of a common spiritual ‘mother city’, as well as with a common (Ottoman Turkish) enemy, emphasizes the strong cultural ties and interaction, in the post-Byzantine era, among East and South Slavs.