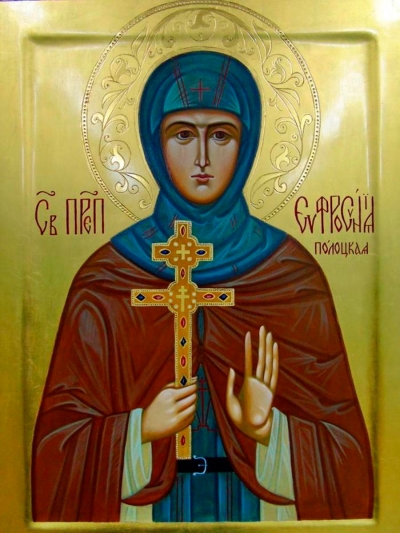 The Reverend Mother Superior of Polotsk is one of the most revered saints in Belarus, a great educator, scribe, founder of monasteries and a builder of churches, patroness of arts and crafts.

Her secular name was Predslava. She belonged to a family of princes of Polotsk, whose family tree originated with the (holy, equal-to-the-apostles) Prince Vladimir, and was the daughter of Prince George Vseslavich. At home she received what was for that time a good education. From an early age, she was distinguished by her love of prayer and book learning, and at the age of 12 she secretly took the veil using the name of Euphrosyne. With the blessing of Bishop Eliyah of Polotsk, sometime after her tonsure, she began to live at St. Sophia Cathedral, where she “started to write a book with her own hands” in the scriptorium at the local library, and, upon taking a fee, gave it to those in need. Here she spent her time in prayer, vigil and copying spiritual books, saturated with wisdom from the books of the cathedral library: “Euphrosyne filled her heart with God's Wisdom.”

Around 1128 Bishop Eliyah instructed her to build a convent in Seltse, two miles from Polotsk, on the banks of the Polota. Going to the place of the future monastery, Euphrosyne took only books, for “they comfort my soul and make my heart rejoice.” Euphrosyne was elevated to the rank of abbess of the Transfiguration (Preobrazhensky) Monastery, which gradually grew and gained strength. Under Euphrosyne the construction of a Spassky (Savior) monastery -nunnery began in Seltse. She begins “with joy and diligence” to teach the sisters of the nunnery to read and write: “Teach me how to work with a merry heart.” In the newly built Spaso-Preobrazhensky Monastery, the saint taught the girls to copy books, sing, sew and do other crafts: “let them learn from youth to understand the law of God and hard work.” Here, Euphrosyne’s sister Gradislawa (going by the name of Eudocia) as well as her cousin Zvenislava (going by the name of Eupraxia) took their vows.

By 1161, due to St. Euphrosyne’s zeal, the stone Transfiguration Cathedral – one of the gems of ancient Russian architecture – had been erected, which, in a reconstructed form, has survived to this day. In the same year of 1161, by the order of Euphrosyne of Polotsk, master Lazarus Bogsha created an altar cross made of wood and studded it with gold on the front and back and with silver plates on the sides. On the sides of the cross there is an inscription with the date it was made, the name of the customer and a terrible spell against theft. The name of the master was carved on the back: “Lord, help your slave Lazarus, named Bogsha, who made this cross for the church of the Holy Savior and Euphrosyne.” St. Euphrosyne also founded the Virgin Mary Monastery for men, built a stone church in it in honor of the Most Holy Virgin Mary. The Abbess devoted a lot of attention to decorating the temple. She sent her servant Michael to Constantinople with rich gifts to the emperor and the patriarch with a request to send a copy of the miraculous Ephesian Icon of the Mother of God. In 1162 the icon arrived in Russia. It first spent about a year in Korsun’ (Khersones) and, at the request of its inhabitants, received the name Korsun’skaya, and then arrived in Polotsk. In 1239, when marrying the Grand Prince Alexander Nevsky, the daughter of Polotsk Prince Bryachislav took the icon as a blessing and presented it to the city of Toropets, where the princess was married.

Shortly before her death, the nun Euphrosyne, with her nephew David and sister Eupraxia, went on a pilgrimage to the Holy Places. Having worshiped at the shrines of Constantinople, she arrived in Jerusalem, where she died in the Russian monastery of the Most Holy Virgin Mary on 23 May of 1167 or 1173. After the death of the Abbess, she was buried in the Jerusalem monastery of St. Theodosius. Not later than 1187, the relics of St. Euphrosyne were transported to Russia to the Kiev Pechersk Monastery. Soon after the conclusion of the Union of Lyublin in 1579, the Orthodox churches of Polotsk were transferred over to the Jesuits, and the Orthodox transferred the cross of Euphrosyne of Polotsk to the Saint Sophia Cathedral. From 1579 to 1841 the cross was kept there, and only in the last date, after the termination of the union was, the cross transferred to the restored Spaso-Euphrosyne monastery.

At the end of the 16th century, there was a Catholic legend about Saint Praxedis – Paraskeva of Polotsk – whose cult was supposed to strengthen the position of Catholicism and the Uniate Church in the Polotsk Territory and contribute to forgetting the veneration of the Orthodox Saint Euphrosyne, Abbess of Polotsk. The Life of St. Paraskeva served as a model for its foundation. According to legend, St. Praxedis set off for Rome in the early 1230s, where she died on 12 November of 1239, as a Catholic. A little later she was allegedly canonized by the Roman Church as a saint. The cult of St. Paraskeva eventually became quite widespread in Polotsk. She became, as it were, an outward doppelgänger of the nun Euphrosyne, which reverberated until the 19th century. Not without the desire to merge these two images in the people's memory, there was yet another Catholic legend about the “cross of St. Paraskeva,” in imitation of the cross of the holy nun Euphrosyne. The so-called “cross of St. Paraskeva,” created not earlier than “the very end of the 16th century,” has survived and is now in the collection of the Rostov-Yaroslavl Museum-Reserve.

In 1910 the relics of the holy nun Euphrosyne, Abbess of Polotsk, were transferred from the Kiev Pechersk Monastery to the Spassky Monastery in Polotsk. On 20 May 1910 the relics of the saint were delivered to the St. Nicholas Cathedral in Polotsk, and two days later they were transferred to the Spassky Monastery and placed in a silver shrine specially built for them. In 1921 the authorities carried out the seizure of church valuables in the Spaso-Euphrosyne monastery, including the cross of St. Euphrosyne of Polotsk and the silver shrine with its relics. The following year, by order of the local authorities, the shrine was opened and the relics of the saint transferred to the Vitebsk Museum of Local Lore. In 1928 the Polotsk Spaso-Eyphrosyne Monastery was closed, and the cross of Euphrosyne was handed over to the Minsk Museum, where it was kept in storage. Then it was sent to Mogilev, where it disappeared during the Second World War. In October 1943 the relics of the saint were returned to the Polotsk Spaso-Euphrosyne monastery, where they are still located.

In 1984 the venerable Euphrosyne of Polotsk was canonized by the Russian Orthodox Church. On 6–7 July 1989 the Polotsk diocese was restored and simultaneously, the Polotsk Spaso-Euphrosyne monastery was reopened. Three years later, on the occasion of the millennial celebration of the Polotsk diocese and the Orthodox Church in Belarus, a decision was taken to recreate the cross of Euphrosyne of Polotsk. In 1996–1997 Brest artist-jeweler N. P. Kuzmich made an exact replica of it, and on 24 August 1997 it was consecrated in Brest. On the eve of the feast of the Exaltation of the Holy Cross, the recreated and consecrated cross was solemnly handed over to the Polotsk Spassky Monastery, where it is currently kept.

St. Euphrosyne of Polotsk, who became famous as the patroness of female monasticism, is equally venerated by both the Orthodox and Catholic churches. The details we know about her are from her Life, which was composed at the end of the 12th century. Based on the fact that the events described in it could only be known by a person who knew the saint, it is believed that the author of the Life might have been the sister of the venerable Eupraxia, who accompanied her during the pilgrimage to Jerusalem, or one of her religious disciples. Written at the end of the 12th century, The Life of the St. Euphrosyne of Polotsk has survived in six editions and more than 180 copies dating from the 16th–18th centuries as part of collections and menaions. It was constructed according to the general canons of the hagiographic genre: at the beginning there is a rhetorical introduction, then the main part with a narration about the life trajectory of the saint and her spiritual ascent, and concludes with praise of the ascetic. A distinctive feature of the Life of Euphrosyne of Polotsk is the absence of stories about posthumous miracles, which are usually presented after the aforementioned three-part composition. Archbishop Philaret (Gumilevsky), historians E. E. Golubinsky and A. I. Sobolevsky believed that the Life of Euphrosyne was written in the pre-Mongol period, and modern scholars share their opinion. The veneration of St. Euphrosyne as a local saint began shortly after her death. Stichera in a handwritten 12th century poem from the most ancient service of the venerable “Come, all who are wise…”, to have survived until our time. In the 16th century, Metropolitan of Moscow Macarius included The Life of the St. Euphrosyne of Polotsk in the Great Minaions Reader, and then in The Book of Royal Degrees. After that, there were two editions of the Life from the “Prologue” (collection of brief Lives and Sermons), and in the 17th century the Life of the saint was included in St. Dimitry of Rostov’s The Book of the Lives of the Saints. In 1893 the service of the saint was compiled, and seven years later, hieromonk Nicodemus (Kononov) wrote a dedicated holy akathist. Then in 1911 a service was written for the transfer of the relics of St. Euphrosyne from Kiev to Polotsk, which was published in the same year by the Synodal Printing House of St. Petersburg.

Euphrosyne of Polotsk is widely revered among Eastern Orthodox Slavs along with St. Cyril of Turov and St. Athanasius of Brest. Her memory is celebrated according to the Orthodox Church calendar annually on 23–24 May and during the feast of the Synaxis of Belarusian Saints, the third week of Pentecost. In honor of the saint, temples have been consecrated in many cities of the world, numerous monuments have been erected to her, her image inspires icon painters, artists, writers and poets. In Belarus there are creative unions and public organizations bearing her name. Since 1993 the All-Belarusian Women's Fund of St. Euphrosyne of Polotsk and the Belarusian Exarchate established an order and a medal bearing her name.

View the embedded image gallery online at:
https://sesdiva.eu/en/virtual-rooms/popular-saints/item/100-evfrosiniya-polockaya-en#sigProIdfa1ddae450
back to top