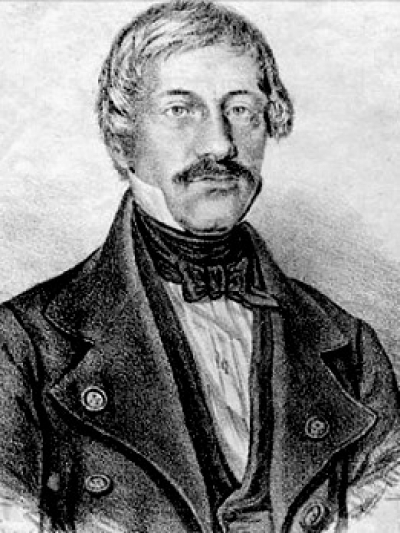 In his articles and political manifestos, he advocated the need to preserve the Slavic and Orthodox heritage of the Albanians, whom he regarded as one people, regardless of the ethnic and religious characteristics of particular ethnic groups belonging to it.

Naum Veqilharxhi was born into an Orthodox family in a village in the region of the southern Albanian city of Korcha and inherited an interest in the Slavic heritage of Albanian writing and culture from his father, Panayot Veqilharxhi, an Albanized Aroman. In 1807–1809, in the midst of yet another Russian-Turkish war, Panayot held the position under the Turkish pasha of century master (manager) of the Izmail fortress, then besieged by Russian troops, and passed along valuable military information to the Russian command. It is interesting that it was the Albanian pronunciation of Panayot Veqilharxhi’s post that determined his family’s surname.

After the Turkish authorities found out about the active contacts with the Russians by the pasha’s adviser in Izmail, reprisals were launched against his family, resulting in the execution of Panayot's brother. He himself, however, managed to escape with his family to the port city of Galati in Moldova, where in 1821 a Greek national liberation uprising broke out under the leadership of Alexander Ypsilanti. Naum Veqilharxhi, along with his 15-year-old brother Konstantin, joined the rebels, and at the age of 24 he became a commander of the rebels.

After the defeat of the uprising in Galati, the Veqilharxhi family found refuge in Bessarabia. There, Naum established close contacts among the Slavic and Balkan emigres – including with Serbs, Bulgarians and Greeks. These contacts and the information he received convinced him of the common interests of all Balkan peoples in matters of national liberation and the preservation of their language and culture.

In 1830, Naum Veqilharxhi moved to Wallachia, where he lived for 15 years in the port city of Braila, working as a lawyer. He later moved to Bucharest, the then center for emigrants from the Ottoman regions of the Balkan Peninsula. He established friendly relations with many prominent representatives of the Slavic peoples, in particular, with the famous Bulgarian enlightener I. Seliminsky. This circumstance had a significant impact on his views, which were distinguished by their internationalist character.

In the 1830s, most of Naum Veqilharxhi’s relatives positioned themselves as Greeks, but he steadfastly insisted that he was Albanian. He characterized the role of language and culture in preserving and strengthening national identity as follows: “Letters are one of the first written foundations of the idea of the movement of the Albanian national awakening”.

For obvious reasons, Naum Veqilharxhi paid special attention to the development of the Albanian language and literature, tirelessly stressing the need to preserve the Slavic and Orthodox heritage in Albania – which he considered to be an integral part of the Albanian ethnos. Having created and published the first primer and textbook of the Albanian language, he simultaneously wrote and sent to all regions of Albania a special “circular letter” (first published in 1845), addressed to “all wealthy and educated Orthodox Albanians”.
In this document, the outstanding Albanian enlightener emphasized the equal importance and rights of all three religions that had historically become widespread in the Albanian lands – Islam, Orthodoxy, and Catholicism. Naum Veqilharxhi emphasized that the Albanian people were united, despite the religious differences among them. According to him, the language, customs and habits of the Albanians had absorbed influences of various ethnic and religious groups and movements, but the Albanian people themselves were one. According to the historical tradition of not only Albania but of other Balkan countries as well, it was Naum Veqilharxhi’s appeal to the Orthodox Albanians that marked the beginning of the Albanian revival, the development of which he saw in close cooperation with neighboring Balkan peoples, including Orthodox. The educator compared the Albanian nation with a larva that would one day become a butterfly.

Naum Veqilharxhi’s educational activities were chiefly focused on the areas of southern Albania with a predominantly Orthodox population. However, he encountered harsh opposition from the Patriarchate of Constantinople. The latter regarded the entire Orthodox population of the Balkans as Greeks, since they were subordinated to its church. In Naum Veqilharxhi’s cultural and educational activities among the Orthodox, the Diocese of Constantinople saw a threat to its interests. According to one historical version, it was agents of the Constantinople Patriarchate who lured Veqilharxhi to Istanbul, where they poisoned him in 1854.

It was not only the Patriarchate of Constantinople that battled against the progressive ideas of the Albanian enlightener-internationalist, but also authorities of the Ottoman Empire, who spread Pan-Islam among the Albanians. “The Turks, on the one hand, and the Patriarchate, on the other, stubbornly refused to give the Albanians literacy, to create an alphabet for them, and to translate several books into their language,” reported A.S. Ionin, the Russian consul in Yanina.

Naum Veqilharxhi knew the history and culture of not only the Slavic peoples of the Balkan Peninsula, but also Russia. One of his favorite historical characters, in particular, was the Russian emperor Peter I. According to Veqilharxhi, Peter opened a “new era” in the history of his people and of the state.

View the embedded image gallery online at:
https://sesdiva.eu/en/virtual-rooms/national-revival-of-slavs/item/50-naum-veqilharxhi-en#sigProIdd4206a5478
back to top