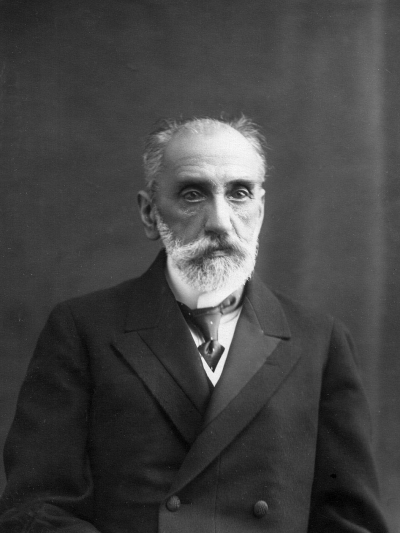 Не was born in the city of Ponevezh, in the province of Kovno (now Panevezhys in Lithuania) into the family of a priest, the rector of the local church and teacher of religion at the city gymnasium. He faced difficulties in life early on; at the age of 12 he lost his father, and the local gymnasium was closed after the Polish uprising. Kulakovsky transferred to the Vilna gymnasium, from which he graduated in 1866 with a gold medal, and entered the faculty of history and philology at Moscow University. His teachers were the famous Moscow Slavicists O. M. Bodyansky, N. A. Popov and A. L. Duvernois. During his studies, Kulakovsky became close to Slavophiles I. S. Aksakov, and the brothers Y. F. and N. F. Samarin. After university, he worked at the Vladimir provincial gymnasium, then at the fourth Moscow gymnasium as a teacher of Latin and Russian literature.

In 1876 Kulakovsky was sent abroad to study Slavic languages. In that part of the Austro-Hungarian Empire that is now the Czech Republic, he studied the Czech language, ethnography, Glagolitic writing and early printed books and was interested in the question of the authenticity of the famous Kraledvor manuscript. Kulakovsky then visited Lyublyana and Zagreb, becoming acquainted with Slovenian and Croatian literature. In the same year, his long-term cooperation with the conservative publisher M. N. Katkov and his newspaper Moskovskiye Vedomosti (“Moscow News”) began, during which time the young Slavic scholar played the role of a correspondent in the Slavic lands. His publications in this newspaper most often did not have a full signature, and were usually signed as “K.,” “P.K.,” “K-sky,” and sometimes “P.D.,” “N,” “Z,” “R,” etc. At the same time, the editor often cut Kulakovsky’s articles, primarily for reasons of political censorship.

After Serbia gained its independence in 1878, it was decided to introduce extensive Russian language training there. This was invited by the Minister of Education, A. Vasilievich, who had studied in Russia. He was aware of the inconsistency of the level of training of local teaching staff and the tasks before them. Therefore, a search began in Russia for a “trained person” for the department of Russian language and the history of Russian literature of the Great School (University) in Belgrade. The head of the Moscow Slavophiles, I. S. Aksakov, and St. Petersburg scholar V. I. Lamansky proposed Kulakovsky, who agreed to sign a three-year contract. “I would like to serve this important cause in Slavic life ... I will try in these three years to travel around the Balkan peninsula and all of Slavdom,” he wrote to a friend in 1878.

On October 28 1878, Kulakovsky delivered an introductory lecture on the topic A Brief Outline of the Development of the Russian Language. In Belgrade, he found problems with a lack of educational literature, reporting that “he did not find any anthologies, Russian grammar for the Serbs or dictionaries.” He immediately began to rectify the situation. In 1879 Ruska Chitanka, a scholarly textbook on Russian literature, prepared by the scholar, was published. Together with students, Kulakovsky translated excerpts from the works of classics of Russian literature, the popularization of which was promoted by his pedagogical talent. A compatriot observing him wrote: “I was at one of his lectures on Lermontov, and I saw how attentively they listened to him and how enthusiastically they recorded every word.” However, realizing that it was impossible to be limited to teaching at the university, Kulakovsky wrote five Letters About Contemporary Russian Literature, which appeared in the pages of the Belgrade journal Otadzhbina (“Fatherland”) in 1880–1881. They lacked critical analysis and academic concepts; they merely introduced readers to the state of affairs of Russian literature and periodicals.

This had an effect. “Many people subscribe to books and magazines recommended by me in these Letters,” he informed Lamansky in 1881. Kulakovsky provided considerable assistance in sending talented Serbs to Russia to study. At the same time, he admitted that all too often those who went to Russia were poorly prepared, and this was due to the Serbs' behaving like mere consumers of Russian charitable aid.

Due to a lack of trained local personnel, Kulakovsky’s trip lasted until 1882, i.e., for four whole years. It should be noted that the salary at the Belgrade Great School was not commensurate either with the scholar’s status or his actual expenses. Therefore, he was paid extra by the Russian Ministry of Foreign Affairs, which considered the dissemination of Russian cultural influence to be a task of paramount importance and the use of the Russian language as a “new spiritual link” between Russia and Serbia. The Russian consul in Belgrade proposed awarding Kulakovsky the Order of St. Anna, 2nd class in recognition of his successful implementation of this task, but he was only awarded the Order of Stanislav, 2nd class. Only the Serbs appreciated the Russian Slavicist’s efforts in the country. Ten years later, A. Vasilievich wrote to the former Belgrade professor the following: “that in Serbian society there was a desire to study Russian language and Russian literature, this was made possible because of your lectures at the Belgrade Great School and your sympathy for the Serbian people. Now almost the entire younger generation reads and understands Russian, and many speak it.”

Upon his return home, Kulakovsky, using the material he had collected, prepared and defended his master's thesis, “Vuk Karadzhich: His activities and significance in Serbian literature.” This was the first serious academic monograph about the man who had created the Serbian literary language. However, the scholar was unable to distance himself from his pan-Slavic views. In his opinion, Karadzhich’s reforms led to the separation of the Serbian language and literature from Russian culture; “the literature of the small Serbian people, because of its weakness, can easily become merely an echo of influences completely foreign to the Serbian people.” Apparently, even the very notion of raising the status of the Serbian language was repugnant to Kulakovsky. He considered it a mistake on Karadzhch’s part that he “raised the language of the people, though soft, sonorous, but far from rich, to a level of language and science.” Debate within the Russian scientific community showed that this point of view had both its supporters and detractors.

In 1884 Kulakovsky began teaching at the University of Warsaw, where he worked until moving to St. Petersburg in 1902. From there he traveled to Bulgaria. This trip left no noticeable scientific traces, but the scientist published impressions of it in the newspaper Moskovskiye Vedomosti. In 1893 he traveled to Zagreb, and the next year he defended his doctoral dissertation, “Illyrism: A Study on the History of Croatian Revival Literature.” In 1895 his book on this topic was awarded the Russian Academy of Sciences A. A. Kotlyarevsky Prize.
The Illyrian Movement in Croatia of the 1830s–1840s considered the Yugoslav peoples to be the descendants of the ancient Balkan Illyrian people and promoted the idea of uniting them into “Great Illyria.” To this end, it was considered necessary, as a first step, to engage in the development of the Croatian language and culture, which should become the basis for the future unity of Great Illyria. Kulakovsky focused his attention mainly on the literary and linguistic side of the movement, considering the connections of the Croats with other Slavs. A special place in the book is occupied by the ideologist of the Illyrian movement, Lyudevit Guy, thanks to whose efforts there was a Croatian literary language, and who, on the basis of Latin, created the Croatian alphabet, called “gajica” after him. In this work, Kulakovsky was able to show a greater degree of academic objectivity, compared to his previous work on Vuk Karadzhich, since he did not give a negative assessment of the Croatian national revival, which estranged Croats from the Russian language and Russian culture even more than the Serbian effort had.

But this did not indicate a change in Kulakovsky’s political views. A friend of the scholar noted that two people lived in Kulakovsky: one is an objective academic, impartially revealing the past; the other is a practical figure, a militant publicist with an undeniable temper.” During his years in Warsaw, Kulakovsky was also the editor of the newspaper Warsaw Diary and in its pages defended his view of Slavdom. “The entire history of the Slavic peoples,” he argued, “since the beginning of its revival, shows that the interests and benefits of Russia and the Russian people are at the same time the interests and benefits of all Slavs, and everything that is harmful to Russia, which diminishes its strength and offends its dignity is harmful and disastrous for the Slavs.” Based on this, he negatively assessed the Poles’ struggle for independence. He devoted a great deal of attention to this topic in his journalism, due to his place of birth, place of residence and the severity of the problem.

In 1902 Kulakovsky moved to St. Petersburg and became the editor-in-chief of the newspaper “Government Gazette”, in which he managed to breathe new life. Three years later, however, in connection with the advent of the new Prime Minister S. Y. Witte, he left this publication and founded a new newspaper, Outskirts of Russia, published from 1906 to 1911. This publication opposed the separatism of the outlying districts of the country; monarchists gathered around it, and Kulakovsky himself took an active part in the right-wing movement.

His last major scientific study, The Beginning of the Russian School among the Serbs in the 18th Century, was published in 1903. It examined the period from the Middle Ages to the beginning of the Serbian national revival. A central place was given to a little-known story about Mikhail Suvorov’s arrival in Serbia at the order of Peter I. Suvorov, a teacher, brought books and textbooks with him and became the organizer of schools in Karlovtsi and Belgrade. In 1908 Kulakovsky returned to teaching, lecturing on Slavic studies at the St. Petersburg Historical Institute and the Women’s Pedagogical Institute. He passed away on 18 December 1913, and his library was transferred to the library of the Academy of Sciences. A list of books received has been preserved. Several hundred titles in various languages speak of the diversity of the scholar’s interests, however, the main one was the notion of Slavic unity, which was perfectly summarized by another famous Slavic figure, A. A. Bashmakov: “Platon Andreevich [Kulakovsky] loved Slavdom all his life; he believed in the ultimate triumph of the great idea of the alliance of the Slavic peoples.”

View the embedded image gallery online at:
https://sesdiva.eu/en/virtual-rooms/national-revival-of-slavs/item/101-platon-kulakovski-en#sigProId4639d79403
back to top