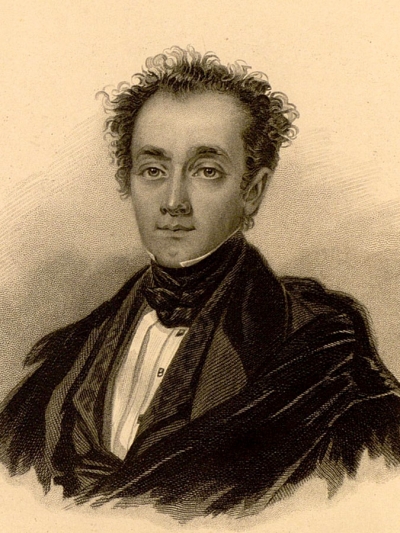 A writer, poet, historian, corresponding member of the Academy of Sciences, director of the Moscow Armory, and a State Councilor at the end of his career.

He graduated from a military academy which prepared junkers to become officers of the General Staff, a prototype of the Academy of the General Staff, after which he served in Bessarabia. During the Russo-Turkish War of 1828-1829 Veltman received the Order of St. Vladimir, 4th class, and the rank of captain. Due to illness, he retired in 1831 with the rank of lieutenant colonel and settled in Moscow, where he engaged in fruitful literary and social activities. His famous Literary Thursdays brought together famous writers, historians, artists and musicians.

He wrote 15 novels, dozens of novellas and short stories, became the founder of the genre of historical fantasy, and one of the first in world literature to use the device of time travel.

In 1843 his story Raina, the Princess of Bulgaria was published, which enjoyed great popularity among Bulgarian emigrants and in Bulgaria itself for half a century. In 1852 it was twice translated into Bulgarian by translators Helena Muteva and Joachim Gruev. Dobri Voynikov created the drama “Raina the Princess”, on the basis of the story and for many years it was successfully performed on professional and amateur stages in Bulgaria and Wallachia. Its subjects attracted artists: illustrations for Veltman’s “Raina” became a classic of Bulgarian fine art. The Bulgarian scholar D. Lekov noted that Veltman’s story had an “impact on the formation of artistic criteria and taste” of Bulgarians of the second half of the 19th century and “is felt” in the creative world of men of letters and writers in Bulgaria. It is considered to be quite well studied, but a careful reading reveals many previously unnoticed features of the era in which A. F. Veltman lived and worked.

What is this story about? It recounts the historical events of Bulgaria and Kievan Rus’ of the 10th century, about the campaigns in the Balkans of the Russian prince Svyatoslav, and his great love for the daughter of the Bulgarian king1*, Peter, the princess Raina, about court intrigues in the struggle for the Bulgarian throne and the diplomatic cunning of the Byzantines. According to Russian and Byzantine historical sources, Prince Svyatoslav appeared in Bulgaria at the invitation of the Byzantine emperor, Nikephoros, to “fight in the Bulgarian land and keep it in his power”. But once in Bulgaria, he turned from an enemy of the Bulgarians into their ally and friend and helped Boris, the rightful heir to the throne, ascend the throne. Having received news of the Pechenegs’ attack on Kiev and the illness of his mother, Princess Olga, Svyatoslav hastened to his homeland. Meanwhile, the Byzantine emperor, John I Tzimiskes, invaded Bulgaria and captured its capital of Preslav. Svyatoslav returned to Bulgaria with an army of 10,000, but was forced to retreat at Dorostol (Silistra) in an unequal struggle with the Byzantine army of 100,000. Raina left her native land with her lover, and both of them perished from the arrows of the Pechenegs on the Dnieper rapids. And Bulgaria came under the two-century rule of Byzantium.

In search for the origins of the idea behind the story, literary historians believed the writer was introduced to the Bulgarian people and Bulgaria through the Russo-Turkish war of 1828-1829. However, one cannot agree with this assertion. In the novel Wanderer (1830-1832), which brought Veltman fame, many pages were devoted to this war. They depict the movement of the Russian army from the Danube, through Pazardzhik to the fortresses of Shumla (Shumen) and Varna, and then its return to Iasi to their winter quarters. However, at the same time, there is no mention of the Bulgarians in any of the pages. More often than not, Moldavian speech is represented in the novel; its heroes and characters speak German, French, modern Greek, Turkish and Arabic. But you will not find a single phrase in Bulgarian in the work! An explanation for this is found in the memoirs of the participants of the 1828 Russian military campaign, who wrote about the absence of the Bulgarians in the cities and settlements occupied by the troops. This was because the Turks had forced the Bulgarians to leave with them without exception. And during the following year Veltman did not participate in the Russian army’s famous Trans-Balkan campaign and therefore was unable to remember how hospitably the Bulgarians had welcomed Russian soldiers beyond the Balkan mountain range.

The writer’s interest in Bulgaria apparently awakened a general atmosphere of heightened attention to the culture of the Slavs in the SHRA – the Society of History and Russian Antiquities. In 1833 Veltman was unanimously accepted as a full member of the society after he presented the collection of books he had written, An Outline of the Ancient History of Bessarabia (Moscow, 1828) and Song to the Militia of Igor Svyatoslavich (M., 1833), i.e., a translation of “Song of the Prince Igor’s Campaign”. Veltman’s activity in the SHRA was diverse and active, but unfortunately it has not yet been studied in detail.

In 1839 SHRA vice president Chertkov, a participant in the siege of Silistra in 1828, studied the famous manuscript of the Bulgarian translation of the Byzantine chronicle of Constantine Manasses (12th century) in the Vatican Library. In the margins of this manuscript, the 14th century Bulgarian translator provided information about his country’s past in cinnabar. Chertkov ordered color copies of the miniatures with scenes of the baptism of the Rus’, the entry of Prince Svyatoslav into Dristar (Dorostol), the battle of the Russians with the Bulgarians, the entry of Byzantine Emperor Tzimiskes into Preslav, and the battles of the Russians and Byzantines near Dorostol.

Russian scholarship of the 19th century was dominated by historiographer N. M. Karamzin’s opinion on Prince Svyatoslav as “a model of great commanders” but “not the builder of the Russian state”. For a long time, the prevailing view was that the Prince of Kiev had passed through Bulgaria with fire and sword, having captured Bulgarian Tsar Boris II (970-971). As for Chertkov, he was the first among Russian historians to single out facts that spoke of friendly, allied relations between the Bulgarians and the Russians. When the Byzantines captured the Bulgarian tsar and brought him to Tzimiskes, it turned out that the captive continued to wear the insignia of royal dignity and “was not imprisoned in chains by Svyatoslav”. The Rus’, the historian wrote, unlike the Byzantines, did not plunder the royal treasures. Of Chertkov’s contemporaries, Veltman alone accepted the assumption about the existence of an alliance between the Russians and the Bulgarians. Almost a century later, the Bulgarian historian Petar Mutafchiev also responded positively to the matter of a possible Russian-Bulgarian alliance during the campaigns of Svyatoslav in the Balkans.

At SHRA meetings, Chertkov reported on his work on the book Description of the War of the Grand Prince Svyatoslav Igorevich against the Bulgarians and Greeks in 967-971 (Moscow, 1843). Critically comparing its sources, the scholar produced a scrupulous analysis information from the Byzantine chroniclers, Leo the Deacon (10th century), John Skylitzes (11th century) and Joannes Zonaras (12th century), Tales of Bygone Years, as well as the research of historians Jovan Raich, L. I. Stritter, S. LeBeau, and others. The logic of Chertkov’s arguments and conclusions convinced Veltman. He accepted the scholar's version of the first campaign of the Kiev prince as the conquest of a part of Bulgaria as an ally of the Byzantine emperor Nikephoros II Phokas, and of the second campaign as the war of the Russians and the Bulgarians against Byzantium. Veltman’s romantically ardent nature could not help but be enthralled by the vivid, dynamic and tragic images of the campaigns of Svyatoslav’s army in Bulgaria. According to the recollections of Russian officers, during the war of 1828-1829 in the Balkans. the Russian army in Bulgaria was invisibly accompanied everywhere by the “shadow of Svyatoslav”.

Thanks to his literary talent, Veltman was able to translate the results of academic research and evidence from the chronicles about Svyatoslav’s campaigns into remarkable artistic forms. At the same time, he managed to revive the narrative with the story of the extraordinary romantic love of Svyatoslav and Raina, whose remarkable image was the fruit of the writer’s imagination.

Both Chertkov and Veltman wrote about medieval Bulgaria as a rich, powerful kingdom. The writer did not mince his words when describing the beauty and wealth of Bulgaria, the luxurious vestments and precious ornaments of Raina. The royal palaces in Preslav and Dorostol are described by him as magnificent chambers, which open on to wonderful views of the cities. And this was despite the fact that Veltman’s memory reproduced a picture different from what he had seen in Bulgaria in 1828: “the unsightliness of houses, even of Turkish pasha, reminiscent of Ukrainian mud huts”.

Veltman’s story, “Raina, the Princess of Bulgaria”, was widespread in Bulgaria, because it not only “embraced the national pride of the Bulgarians of that era” (as the Bulgarian scholar Ivan Shishmanov wrote), but also inspired confidence and hope that Bulgaria – a country with a glorious past – would certainly rid itself of Turkish oppression. The work loudly reverberated with the idea of ​​the historical predetermination of Russia taking part in the liberation of Bulgaria. It was shared by all Russian officers, participants in the Russian-Turkish war of 1828-1829, and Bulgarian readers of the second half of the 19th century shared it with great enthusiasm and hope.

* Veltman used the title “king” for the sovereigns of Bulgaria, although in historiography they are called tsars. Bulgarian translators gave this title each in its own way: H. Muteva – as “king”, J. Gruev – as “prince”.

View the embedded image gallery online at:
https://sesdiva.eu/en/virtual-rooms/modern-authors/item/147-alexander-fomich-veltman-en#sigProId1492f1aba7
back to top