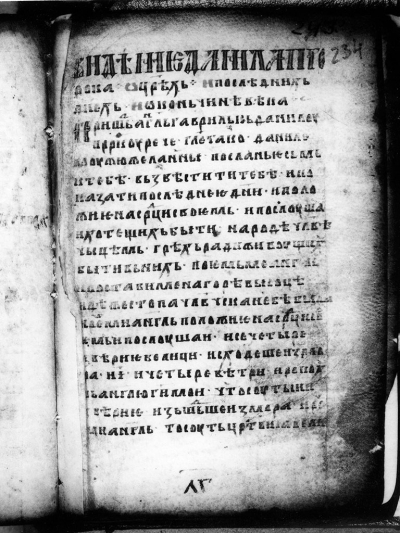 The manuscript consists of 272 parchment folios, 140 x 100 mm, and today is kept at the National Library in Belgrade under No. 651 (632). It was named after the scribe Father Dragol who called himself Presbyter Basil – marginal note on f. 45v: писа многогрѣшны рабь б(о)жи презвитерь Василиѥ а зовом попь Драголь. It was found by Pantelija Srećković in 1875, in the Albanian village of Skutari (Shkodër), in the family of a priest that had kept it for 17 generations. The manuscript was considered lost after the fire in the library during World War II. The linguistic peculiarities and the orthography of the manuscript are typical of the Raška tradition, but sometimes there are traces of a Middle Bulgarian protograph. V. Jagić and Đorđe Sp. Radojičić expressed the opinion that he majority of the works originated in a western Bulgarian region. Other researchers (A. Белић) tend to agree that the miscellany was written in the Principality of Raška (the southern of Western Serbia and some neighboring regions of Montenegro and Kosovo) and that it originated in the literary school of St. Sava. Following an analysis of the content, it is now assumed that the contents were formed from works of Old Bulgarian, Russian and Serbian literature, and is evidence of the close contacts in Balkan literature. It consists of works of varied genre and intent, primarily many apocrypha. It contains the oldest copies of a number of quasi-canonical works: erotapokriseis (with the names of St. Gregory the Theologian, Basil of Caesarea and John the Theologian), Commentary of Gospel parables, manuals on divination (Christmas carols, Brontologion, Lunamancy with forecasts for the sick), apocryphal prayers ascribed to St. Sisinnius, Story about the twelve Fridays, Revelation of the holy apostles and the Revelation of Baruch, among others. There is a distinctive copy of the Series of stories about the Holy Tree by Father Jeremiah, a 10th century Bulgarian writer, which is titled: Слово и похвалениѥ Алеѯаньдрово ѡ Моисѣѡвѣ извитѣмь дрѣвѣ ѡ певзи и кедри и кифарисѣ, as well as a redacted version of the Sermon against the Bogomils by Cosmas the Presbyter under the title of О оучениї вѣры. The miscellany includes homilies from the Chrysochous in an early translation, a cycle of sermons about Lent, aphorisms of ascetic content, parts of the Nomocanon (about the foundations of Orthodox faith, communion. Confession and the obligations of priests), among others. It also includes the “Tale of a layman, and on monasticism, and on the soul, and on repentance” (known also as Повесть о белоризице и о мнишестве), of Russian origin, which penetrated in South Slavic literatures early.

The end of the miscellany features a cycle of historical-apocalyptic works: Visio Danielis de tempore novissimo et de fine mundi (The Last Vision of the Prophet Daniel), Homily of Saint Hippolytus of Rome with Interpretation of the Words of Prophet Daniel about the End of Times, Homily of Hypatius of Ephesus on the End of the World, Story of Prophet Elijah about the Last Times, Revelation of St. Methodius of Patara, and Pandeh’s Prophetic Story, among others. The Revelation includes a number of interpolated toponyms related to Bulgarian history – Sredets, Glavinitsa, Pernik, Danube, Mraka, Velbuzhd, Salonica, Strumica. Initially, they were in the form of glosses added by an anonymous scribe in a translation from Greek in the 10th century. Two names have been added in the translation of the Vision – those of Gavril Radomir (1014–1015) and Ivan Vladislav (1015–1018), as well as entire passages referring to the legendary King Michael. Pandeh’s Prophetic Story is an original work dating from 1259 and it also covers the fate of the neighboring Balkan peoples. It has been studied by a number of Serbian, Bulgarian and Russian scholars. The cycle contains unique evidence of the historical-apocalyptic works of the 11th through the 13th century.

Original works and compilations written by Bulgarian scribes in the 11th and the 12th-13th century prevail. Their Greek prototypes were redacted and complemented. They originated as political prophesies about the Balkan peoples, reflected historical events and persons – the revolt of Peter Delyan (1040–1041) against Byzantine rule and its suppression, the invasion of the Third Crusade (1189–1192) in the 12th century, military action I the Balkans in the 12th century, the fate of the rulers and the people.

The overall content of the Miscellany of Father Dragol illustrates the unofficial literature that was written and copied by the lesser clergy for individual use. The authentic point of view of history differing from Byzantine chronicles is preserved in the redaction and transmission of certain works and entire cycles in Balkan literature.

View the embedded image gallery online at:
https://sesdiva.eu/en/virtual-rooms/medieval-written-heritage/item/169-dragolov-sbornik-en#sigProId43f5cd2a5c
back to top