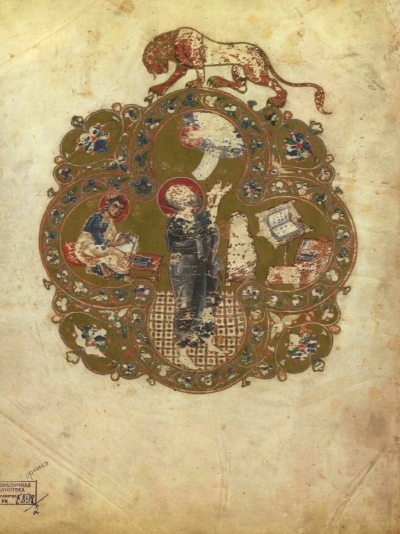 The Ostromir Gospel is the oldest dated manuscript of the Eastern Slavs measuring 35.5 x 29 cm, on 294 parchment sheets.

It is written in a large script in two columns, each of which has an average of 18 lines; the size of the text field is 20 x 24 cm, the size of the letters is from 5 to 7 mm. The manuscript is richly illuminated; it contains miniatures with images of the Evangelists, headpieces, as well as numerous large, medium and small initials. The large initial “B”, which is sometimes zoomorphic or anthropomorphic, is found most often in the text. Cinnabar, gold particles, green, red, brown, yellow and blue paints were used for decoration. The content of the manuscript is a short Book of the Gospels, the main part (s. 2–204) of which are daily readings for the 50 days from Easter to Pentecost, as well as Saturday and Sunday readings for the subsequent weeks of the year. Readings according to the menology from September and for various specific occasions are also inserted within it: for the consecration of a church, “on the tsar’s victory in battle”, etc.

On the reverse side of sheet 293 of the Gospel is a record that clarifies the circumstances of the appearance of this manuscript. Judging by the data contained in it, Deacon Gregory worked on its creation for seven months (from 21 October of 1056 to 12 May of 1057). He began to work on it by order of the son of Yaroslav the Wise, the Grand Prince of Kiev, Izyaslav. The manuscript was intended for a close princely relative of the Novgorod mayor Ostromir. In Kievan Rus’, the office of the mayor of Novgorod – the second largest city of the state – was a very high position. The mayor was the key figure in Novgorod; he was placed by the Prince of Kiev to rule the city in order to represent the princely interests in it. The Kiev appointee was invested with complete power: he administered the court, was in charge of defense and of Novgorod’s trade relations with other Russian and foreign cities. Deacon Gregory calls the mayor by the pagan name of Ostromir, although he presents the name given to him at baptism – Joseph. At the end of the record, the scribe wishes health not only to Ostromir but also to his wife Theophanes, their children and the wives of their children. At the same time, Gregory communicated that he had tried to work on the manuscript as carefully as possible and asked not to be cursed for any errors discovered, but to correct them and bless them – a rule encouraged by the apostle Paul.

Ostromir came from a noble family: his grandfather Dobrynya was the uncle of the baptizer of Russia, Prince Vladimir, and served as the prototype of the epic hero Dobrynya Nikitich. As for Ostromir himself, he was a cousin of the aforementioned Grand Prince Izyaslav. The magnificent Gospel made for him was most likely intended to be used when he was placed on the throne of St. Sophia Cathedral, the main church of northwest Russia, which had just been built in Novgorod (1045–1050). After receiving the gospel, Ostromir Joseph reigned for a relatively short time. Three years later he died, having led the Novgorod militia during a campaign against the Chud’ (Finnish tribes).

It is not known how long the Ostromir Gospel remained in Novgorod after that. It could have been brought to Moscow by a well-known book lover, the Novgorod archbishop Macarius, who, under Ivan (John) the Terrible, became the Metropolitan of Moscow in 1542, i.e., the head of the Russian Orthodox Church. Or this may have happened later during the punitive campaign against Novgorod in 1570 by Ivan the Terrible himself. In any case, at the beginning of the 18th century the Ostromir Gospel was already stored in the Resurrection Church of the complex of Verkhne Spassky Cathedral, which was the home church of Russian tsars at the Terem (wooden) Palace of the Moscow Kremlin. In 1720 the manuscript was handed over to Peter I, and together with other books it ended up in St. Petersburg, belonging in turn to members of the Russian imperial family. In 1806 the Russian Emperor Alexander I ordered the manuscript be transferred to the Imperial Public Library (now the Russian National Library), where it is still stored under the code F. n.1.5. Unfortunately, the magnificent gilded cover of the Ostromir Gospel, made in 1851 at the expense of Moscow merchants, almost led to the destruction of the manuscript. In 1932 a vandal plumber broke into the display case where it was stored, stripped off the precious binding and threw it behind a bookcase. After the mutilated manuscript was discovered, it was decided not to rebind it, and it was placed for preservation in an oak casket.
The text of the Ostromir Gospel has been published numerous times. It was first published by Russian scholar A. Kh. Vostokov, who in 1843 carried out the typesetting of the text of the document, accompanied by a brief grammar of the Old Russian language and the subscript Greek text. About four decades later, a facsimile edition of this rare manuscript, important for its paleographic study, was issued at the expense of Russian merchant Ilya Kirillovich Savinkov. It is worth noting the expensive gift edition in color of the Ostromir Gospel, printed in Leningrad in 1988 in connection with the 1000th anniversary of the baptism of Russia. Grammars and dictionaries of the Old Slavonic language were created and continue to be created on the basis of the text of the document. The language of the manuscript reflects the features of the archaic written literary Old Church Slavonic language, which was then spread in Kievan Rus’ through translated Bulgarian books. (Deacon Gregory probably copied a distant text of Bulgarian origin: apparently, it was a manuscript created at the beginning of the reign of Bulgarian Tsar Simeon the Great.) At the same time, local Russian linguistic features are observable in this language, which makes it possible to conjectures that by that time some of the Eastern Slavs had a Russian edition of the Old Slavic language. This can be seen, for example, in the instances of the use of full consonance, mixing ancient Slavic nasal vowels Ѧ, Ѩ, Ѫ and Ѭ with О, Ю and Я or using reduced Р and Л instead of syllable РЪ, РЬ and ЛЬ. In the decoration of the manuscript, one feels a connection not only with the artistic traditions of Byzantium and Bulgaria, but also with Western Europe.

As a result of a thorough codicological and paleographic study of the Ostromir Gospel, it was established that at least three scribes took part in its creation and that special “ecophonic” (musical) icons were not always put in the right places. In general, scientific study of the manuscript cannot be considered complete. For example, to this day the controversial issue of whether it was created in Kiev or Novgorod has not been resolved, and currently the arguments of the supporters of the both sides remain approximately equal. Further study of the document will certainly lead to new and perhaps unexpected scientific discoveries.

The only thing that is not in doubt is the great importance of the Ostromir Gospel to the history of earliest writing among the Eastern and Southern Slavs. It is no coincidence that in 2011, UNESCO included the Ostromir Gospel in the list “Memory of the World” – a register that usually includes the most significant documents of the world’s cultural heritage.

View the embedded image gallery online at:
https://sesdiva.eu/en/virtual-rooms/medieval-written-heritage/item/128-ostromir-gospels-en#sigProId2b12046d33
back to top