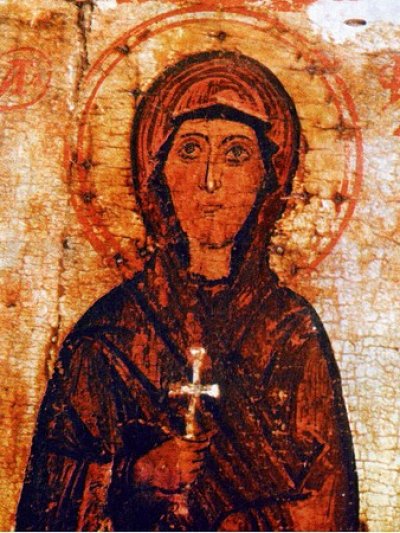 Saint Thecla is known as the first female saint and martyr in Christianity.

According to the orthodox church calendar, she is celebrated on the 24th of September. Her story was written down for the first time presumably in the very beginning of the 3rd century, as part of the apocryphal Acts of Paul. The text was therefore known as the Acts of Paul and Thecla (BHG 1710), which only later on transformed into the Martyr act (and/or Life) of Saint Thecla.

She was the most popular female saint until the 5th century, when the cult of Mary started to grow, and thus became a model saint for many Christian women to follow. Her text was translated into several classical languages: Syriac, Armenian, Coptic, Latin and also Old Slavonic, which led to the creation of other versions and differentiation in the appropriation of the saint in these different cultures. For example, in Asia Minor and Egypt from the 4th until the 6th centuries, Thecla is much more often portrayed on material objects mainly because of her cult as a protector of pilgrims.

When Thecla gets acquainted with the apostle Paul for the first time, she is an 18-year old fiancée of an upper-class nobleman named Thamyris in Iconium, Asia Minor. During his missionary work in the region, Paul decides to visit the house of Thecla’s neighbour to preach the Christian faith. Thecla is immediately converted by his words and retires from the world. Her mother and fiancé disapprove of her attitude and deliver her to the court. The judge condemns her to the stake for breaking the laws of the city (she refuses to marry Thamyris), but, miraculously, she is saved and leaves the city in search of Paul, who had himself been banished for preaching Christianity. They meet again in Antioch, where Thecla is yet again condemned by a court, because she did not let the nobleman Alexander come near her and after this insulted him. She is sentenced to battle with wild beasts in the arena. The lioness, however, helps her by defeating the bear, and later Thecla baptises herself in a nearby lake. Afterwards, she sees Paul again and is allowed to preach on her own in her home country, where she lives a long and prosperous life performing miracles.

Her Martyr act was translated into Slavonic in the earliest phases of Slavic literacy, most probably written in the Glagolitic alphabet. Today, it is preserved in at least 47 South and East Slavic manuscripts (of different quality), ranging from the 11th until the 18th century. The two oldest fragments date from the 11th and the 13th century. Two manuscripts represent a second translation (made on Mt. Athos or in Tărnovo during the 14th century), of which the original is lost: the two copies date from the last two decades of the 15th and the first half of the 16th centuries. Linguistic analyses point out that the first translation of this text exists of at least two versions: one version is clearly earlier of date, the other is of a later date.

Less than one third of the manuscripts preserves only the Martyr act of Saint Thecla, including the two manuscripts preserving the second translation: all the other text witnesses of the Martyr act are accompanied by at least one Miracle tale. Three different Miracle tales, most of them concerning healing tales, have been translated into Slavonic: not all 21 copies preserve all three Miracles, but the order, in which the tales appear, is in all manuscripts the same. This can be considered an argument for the hypothesis that the translation was made only once, and copied multiple times afterwards. An interesting fact is that one particular Miracle tale has only been preserved in East Slavic copies.

Besides the original Martyr act, also the Metaphrastic Martyr act has been translated into Slavonic: the Metaphrastic Martyr act is a rewriting within the Greek tradition, attributed to the 10th-century writer Symeon Metaphrastes: he made linguistic and stylistic changes to the texts in order to make them more accessible to contemporary elites. In Slavonic translation, only one copy has been preserved, which dates from the 14th century and was most probably written at the Hilandar monastery on Mt. Athos. Later rewritings occur as well: a Bulgarian, a Russian and a Ukrainian version of Thecla’s Life. This clearly shows that St. Thecla was still an important saint until deep into the 18th century in different Slavic cultures.

The Bulgarian rewriting dates from 1743, and was made by the damaskinar Joseph the Bearded. A damaskinar was a writer or copyist of damaskini: these were collections, composed in 18th-century Bulgaria and consisting of religious tales, usually with a moralising character. This translation into Bulgarian is loosely based on the modern Greek rewriting of the Cretan monk Agapios Landos, who published his work in Venice in 1641. This text was a rewriting of the Greek Metaphrastic Martyr act of the 10th century, which by the 17th century was already quite hard to read for the general public. As goes for the Bulgarian tradition: this translation came into being to make particular hagiographical texts more accessible to the people.

Dimitrij Rostovskij, also known as Tuptalo, published a complete menologion in 12 volumes (each volume dedicated to a month in the year) in a Ukrainian redaction. This happened in Kiev at the end of the 17th or beginning of the 18th century, but the Muscovite Patriarch did not authorise this activity… Writing in a more rhetorical style, the author has also allowed himself to highlight particular scenes or sentences, and added references to the text in the margins, connecting the text to the Bible and texts of the Church Fathers (St. Gregory of Nazianzus, St. John of Damascus, St. Ambrose, St. John Chrysostom), in other words, to canonical literature. This way, he wanted to legitimise the story.

And last but not least, a new translation of the Martyr act of Saint Thecla appears in one single Russian manuscript from the 18th century. For now, nothing can be said on the matter, since no one has yet investigated this particular text.

But not only hagiographical works have been dedicated to saint Thecla, there also exist many synaxarion texts or shortened versions of this Martyr Act (проложные жития, usually 1 to 2 folios long) and hymnographical texts, which are preserved in a vast amount of copies. In non-textual sources, she recurs as well in the Slavic tradition. Thecla is portrayed in mural paintings and frescos in important 11th-century and 12th-century churches in Černigov and Novgorod. According to the scholar Ščegol’kova, the scarcity of the representation of St. Thecla emphasises the importance of her as a saint even more. Thecla does not just appear anywhere, she represents important characters or is called upon at significant events…

View the embedded image gallery online at:
https://sesdiva.eu/en/virtual-rooms/popular-saints/item/150-saint-thecla-protomartyr-en#sigProIdbef027cef5
back to top