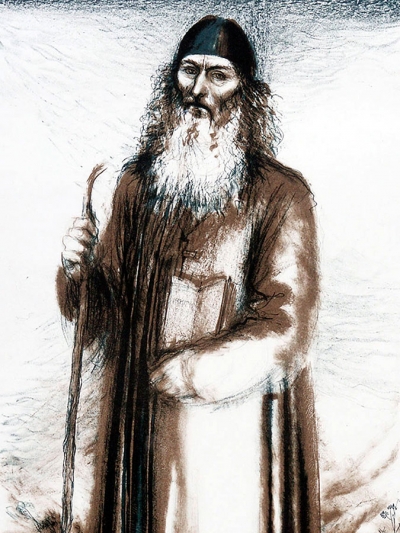 Avvakum (Petrov) was a writer, one of the main defenders of the old faith, a holy martyr who met his death for his confession of his faith, and the author of the first autobiography in Russian literature.

He was born in the village of Grigorovo, in the province of Nizhny Novgorod on 20 November 1620 (old style) into the family of a priest. At the beginning of his pastoral journey, he joined a “circle of pious adherents,” which included the tsar's confessor, Stefan Vonifatiev, and won the protection of the latter. The task of the circle was to strengthen piety in the Russian church. As an archpriest in the city of Yuryevets-Povolsky, Avvakum called on parishioners to correct their demeanor, sternly rebuked them and introduced reading in unison, which made the services longer. This caused not only their discontent, but sometimes resentment.

Fleeing from an angry flock, Avvakum retired to Moscow, where his future ideological opponent, Nikon, already sat on the patriarchal throne. Having hitherto been a member of a circle, his views soon diverged from those of his associates. In February 1653, at the beginning of the Great Lent, Patriarch Nikon single-handedly announced significant changes in the service and the replacement of the two-fingered sign of the cross (which had existed in the Russian church since ancient times) with a three-fingered one. Nikon’s attempt to reform the service in accordance with Greek practice was perceived by some believers as a desire to violate the centuries-old foundations of Russian piety, provoking forceful protests and consequently leading to a split in the Russian church. Later it turned out that the editing of liturgical books during the reform was carried out not according to the old, but according to the newly printed Greek editions. In political terms, the reform was designed to meet both the tsar’s plans to put Russia at the head of the Orthodox world and Nikon’s desire to affirm the superiority of the patriarchate over secular power.

The authorities’ reprisals against the protestors could not but provoke a reaction from Avvakum, who fearlessly denounced the innovations. On 13 August 1653, during his all-night vigil in Moscow’s Kazan Cathedral on Red Square, he was seized, put in chains, and then sent to Andronik’s Monastery. There Avvakum was subjected to abuse and beating. Together with him, 60 of his associates were imprisoned. An intervention by the tsar saved him from being defrocked. In the same year Avvakum was exiled with his family to Tobolsk “for his outrages” and then sent on a trek to Siberian Dauria with commander A. F. Pashkov on an expedition replete with difficult trials and dangers. On the way he suffered many hardships and humiliations and survived the death of his two sons.

His return from exile through all of Siberia began in 1661. On the way to the capital, Avvakum preached and denounced the innovations introduced by Nikon, according to his own testimony in his biography: “in all cities and villages, in churches and in markets.” In Siberia his fame as a defender of and martyr for the “old faith” was born. In Moscow he became the leader of the Old Believers, replacing the priest Ivan Neronov, who was already old and did not have the strength to fight actively.

In the capital, events at first developed favorably for the archpriest: the tsar and the boyars – opponents of Nikon – received him favorably. However, Avvakum spoke not only against the patriarch (which was welcomed by the boyars), but above all for the preservation of church principles. Therefore, the paths of Avvakum and his patrons diverged. In 1664, when he began to openly and publicly speak out against the new rites and compose angry petitions to the tsar, they decided to exile him and his family to the city of Pustozersk. However, they couldn’t send them further. Soon, in connection with preparations for the Church Council of 1666, with the participation of the eastern patriarchs, arrests of the archpriest’s associates began, and then he himself was brought to the capital for trial. Prior to the trial, Avvakum was kept in the Nikolo-Ugresh and Pafnutievo-Borovsk monasteries. The prisoner did not heed the admonitions of Paul, the Metropolitan of Krutitsa, who, according to Avvakum, tried to convert him to “his loving faith.” He did not submit to the demands of the council, for which he, together with Deacon Fyodor Ivanov and the Suzdal priest Nikita Dobrynin, was defrocked and cursed in the Kremlin Assumption Cathedral.

The following year he was exiled to Pustozersk, where he was sent along with the priest Lazarus and the deacon of Solovetsk Epiphanius (both of whom had their tongues cut off) and the Simbirsk priest Niсephor. Here Avvakum was imprisoned in an earthen cellar, but he did not give up. He continued to defend the old faith and sent exhortations to authorities and like-minded people until his execution, which was sought by Patriarch Joachim. On 14 April 1682, Archpriest Avvakum was burned in a log house, allegedly for “great blasphemy against the royal house,” together with his three associates – Lazarus, Theodore, and Epiphanius. The archpriest’s dying words served as an idiosyncratic testament, in which he addressed the people, raising his hand with a two-fingered sign of the cross: “If you pray with this cross, you will never perish!”.

It was during his 15-year-long exile in Pustozersk that Avvakum created his main works, including the aforementioned autobiography. He wrote it in 1675 at the urging of his spiritual father, the monk Epiphanius. This work is preceded by a lengthy theological introduction. Based on the definitions of Dionysius the Areopagite (“the truth is the Eternal, and the abandonment of the truth means the abandonment of the Eternal” and others), the author claims that the “new lovers,” that is, the followers of Nikon, fell away from the truth, and therefore rejected God. What follows is a discussion of the spiritual consequences of the change of worship under Nikon, in particular, that the “four-way” chanting of “Hallelujah” is abhorrent to God as a violation of the Divine Trinity.

Avvakum’s autobiography is one of the monuments that opened a new era in Russian literature and exemplified the formation of the author's self. The work of Avvakum is a documentary and artistic narrative and, at the same time, the most important source on the history of the Old Believers of the 17th century. Its main, biographical part is a story rich in everyday details and dialogues about the author’s life as an unshakable adherent of the old faith. It is stated in simple, sometimes rough, but very figurative language. In the text, the autobiography and quotes from Holy Scripture and Church Slavism coexist with colloquial expressions and descriptions of a naturalistic type.

Avvakum in an expressive and psychologically credible fashion sets out what happened to him, skillfully reproduces individual episodes and creates memorable images with a few strokes. These are the author’s stories about the trials that befell him in the Spaso-Andronik monastery, where he, exhausted and hungry was fed tasty cabbage soup by “an angel or a man.” There are attacks on him by lay people and priests, whom he had weaned “from fornication,” as well as revenge by a “boss,” whom he did not allow to take his daughter from his mother. A special place in his composition is occupied by the narrative of a grueling trek in Dauria, in which the touching image of Avvakum’s faithful and courageous companion, his wife Anastasia Markovna, is especially notable.

Life of the Archpriest Avvakum, written by Himself was intended to explain to contemporaries the inevitability of suffering for those who oppose the coming Antichrist: “And now they torment everyone, they do not enjoin to believe in the old Son of God, the Savior of Christ, but they call to the new god, the antichrist.” The text of the Life has come down to us in three author's editions and in the Pryanishnikov’s copy from the 19th century. Among the nearly 60 works of Avvakum, the Book of Conversations should be noted, where church reform is presented as a return from the Gospel to the Old Testament, which marks the approach of the Last Judgment. The Book of Revelations, or the Everlasting Gospel (1679), contains a polemic on dogmatic issues with deacon Fyodor Ivanov. And in the Book of Interpretations (1673–1676), in addition to interpretations of the books of the Old Testament, the text includes Avvakum’s teaching on What is Christian mystery and how to live in the faith of Christ. Avvakum 's epistolary heritage includes petitions to tsars Alexey Mikhailovich and Fyodor Alekseevich, letters to associates such as the noblewoman Theodosia Morozova, Eudocia Urusova, Abbot Theoktist and other persons.

View the embedded image gallery online at:
https://sesdiva.eu/en/virtual-rooms/popular-saints/item/113-protopop-avvakum-en#sigProId9574aef429
back to top