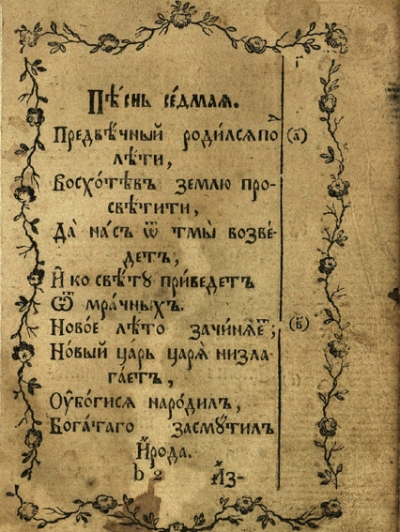 Ruthenian devotional songs can be readily recognized as a discrete text genre on the basis of their formal features, but also through their forming a fairly closed repertoire, as it is attested from the latter half of the 17th century in specifically designed manuscript song collections throughout the Ruthenian lands and Russia. Formally, Ruthenian devotional songs closely follow the pattern of their Polish models, most notably the Polish syllabic verse in rhyming couplets. As for the range of subjects, most songs would stick for their topics to the major feast days of the ecclesiastic year, but general songs in praise of either the Mother of God and to a lesser extent in praise of the Lord, also abounded. From the beginning of the 18th century privately collecting these songs in personal manuscripts became quite wide-spread. Up to the end of the century the collectors’ enthusiasm for devotional songs throughout Ruthenia and Russia remains vibrant and does not subside until the publication in print of the Bogoglasnik at the Uniate monastery of Počajev (Ukraine) in 1791.

Among the Southern Slavs, Serbia likewise witnessed a rise of private song collecting only a few decades after Ruthenia and Russia. From the 1750s onwards a growing number of highly individualized manuscript song collections make their appearance. The content of most Serbian collections, however, widely differs from those of Ruthenian and Russian collections. Serbian collections are by and large much more prone to secular songs. Which is more is that the overwhelming majority of songs found in Serbian collections is indeed of Serbian origin. But then again, Serbian collections also contain to differing degrees songs of obvious Ruthenian origin. A total number of 32 Ruthenian devotional songs could be identified in Serbian, Bulgarian and Macedonian manuscripts from 1756 onwards – this date is given in the earliest extant Serbian devotional song manuscript. So there are obvious indications of a direct impact of Ruthenian on Serbian devotional poetry. Most of these songs range among the most popular songs in their region of origin, among them many Christmas carols, like Предвѣчный родился под лѣты (“The pre-eternal is born into time”, French National Library, cod. slav. 52, dated 1756) or Витай дѣтя малое, агня незлобивое (“Hail thee, little child and guileless lamb”, Song collection of Teodor Dobrašević, dated 1763), which are known to have been used in Star singing. As time went by, Ruthenian devotional songs became quite popular with the Southern Slavs, so much so that Damijan Kaulici prepared in 1790 a printed anthology of these songs, which was being reprinted in 1801 and another time slightly revised in 1804. Later on Ruthenian devotional songs became appendixed to printed as well as manuscript collections of church chant known as Katavasija. Collectors of devotional songs in Serbia and Bulgaria were mostly priests, teachers and cantors, whereas collectors from other professions of the emerging reading classes preferred collecting secular songs, adding only the odd devotional song to their collections.

Quite a substantial number of devotional songs found in South Slavic sources cannot be traced back to any Eastern Slavic source, despite their obvious Eastern Slavic make-up, among them most saliently their linguistic features. It may be assumed that these are in fact original South Slavic creations inspired by and neatly imitating Ruthenian devotional songs. Thus Ruthenian songs were not only collected but inspired the poetic creativity of Serbians and possibly also Bulgarians in the second half of the 18th and the first half of the 19th century. The language of the original South Slavic devotional songs can be identified as Slavenoserbian. The use of this particular language for the composition of new songs gives a clear hint that the milieu from which these songs emerged and which – it may be assumed – also served as the gateway for the dissemination of devotional songs, was most likely that of the emergent Serbian education system.

Ostojić & Ćorović assumed that Ruthenian devotional songs were introduced into Serbia by Russian teachers who came to the country during the terms of office of metropolitans Mojsej Petrović and Vićentij Jovanović and identify the Serbian metropolitan see at Sremski Karlovci as the gateway for their further dissemination. On finding out, however, that some songs found in Serbian collections appear to originate from Transcarpathia, Vodoff suggested that rather than through Slavic-Latin schools run by Russian and Ukrainians it was via the Transcarpathian Ukrainian settlers, who were installed in the regions of Bačka and Srem by the Austro-Hungarian regional government from the mid 18th century onwards, that songs disseminated into Serbia proper. Thus the question to deal with is: did Ruthenian Devotional Songs enter South Slavic culture through contacts with rural newcomers, i.e. the Rusyns, or via transnational urban networks of learning and education? It is implied that these songs were introduced into Bulgaria and Macedonia not directly, but through the Russianized Slavenoserbian school system, and more to the point through Serbian print editions.

The Rusyns, who came to Vojvodina around the mid 18th century, seem to have been, in fact, no more than a fairly marginal community of agricultural settlers, and it may be doubted whether they attracted much attention among the Serbian majority population, especially in the rising cultural centers of the evolving Serbian nation at Karlovci and Novi Sad. As a matter of fact, the confessional divide between Greek-Catholic Rusyns and Orthodox Serbians did not particularly recommend them as a cultural model of any kind.
The influx of Ruthenian devotional songs into Serbia ought therefore to be linked to the erection of Slavic-Latin schools in Serbia from 1726 onwards. Owing to the resettlement of Serbians to the Austro-Hungarian Empire during the Great Serbian Migration (velika seoba Srba), anxieties of cultural estrangement and endangerment grew among the representatives of Serbian Orthodoxy, who found themselves to have become the subjects of a basically Roman-Catholic empire and feared attempts of forced Uniate Catholic acculturation. Perceiving the threat of the many newly founded nearby catholic schools against the poor if not entirely inexistent school system on the Orthodox side, patriarch Arsenij III Crnojević applied to emperor Leopold I asking for the foundation of an Orthodox gymnasium at Sečuj, which request was, however, not granted. Further supplications to this and similar effects did not yield any positive results, so that in 1721 metropolitan Mojsej Petrović appealed to Peter the Great for support of the Orthodox cause among the Habsburg Serbians. The ultimate remedy to Catholic overtures was sought for in the foundation of an advanced clerical school. The Russian Holy Synod appointed one of its translators, Maksim Terentievič Suvorov to set up the needed educational institution. Suvorov arrived at Sremski Karlovci and took up teaching on October 1, 1726. Suvorov himself remained only for a short time in Serbia and he was probably not the one to have brought Ruthenian devotional songs to Serbia. After Suvorov’s departure in 1731, metropolitan Vikentij Jovanović wrote to Kiev, asking for graduates from the Mohyla Academy, willing to come to Serbia to teach at Sremski Karlovci. Jovanović expressly wished for the prospective teachers to stick to the Kievan curriculum. Emmanuil Kozačinskij, at this time already professor at the Mohyla Academy, came to Sremski Karlovci, and was joined in his work by a whole team of teachers. Their teaching programme corresponded to the elementary and intermediate levels of the Mohyla Academy. Though, Kozačinskij’s team was more successful, they were ultimately not spared the fate of their predecessor Suvorov, and gave up teaching after quarrels with the Serbian church authorities in 1737. It is with him that Ruthenian devotional songs alongside other features of Kievan Mohylan culture was being introduce into Serbia, to spread from there further into Bulgaria and Macedonia.

The further dissemination of Ruthenian devotional songs was probably effected through the heritage system of teaching consisting of so-called ‘cell schools’ (Bulg. килийни школи) found at monasteries and churches. These schools were run by priests and monks, who would take in children from the surrounding villages as servants for menial tasks and would in return teach them reading the holy books. There were also private schools at which members of the lower clergy, so-called daskali were in charge of teaching. Within these schools, the singing of devotional songs must have formed part of the curriculum, as is testified by the titles of printed song books called Katavasija, which contain also Ruthenian devotional songs. Gregory Vozarović’s Katavasija of 1843 clearly identifies youth learning church chant as its readership (во употребленїе юности учащїѧ сѧ церковному пѣнїю “for the use of the young who are learning hymn singing”), and the later Mala Katavasija is explicitly identified as a school book (Мала катавасија за употребу школске младежи “Small Katavasia for the use schoolchildren”).