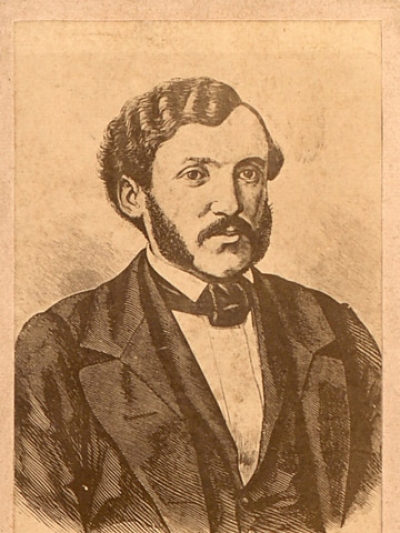 Konstantin Miladinov was born in Struga in the family of Hristo and Sultana Miladinovi. His father was a potter. He was the younger brother of Dimitar Miladinov (1810–1862) – prominent Revival Period teacher and writer, and also of Naum Miladinov (1817–1897) – an art critic, musicologist, and collector of folk songs, which he wrote down in notes. At the end of his life the latter compiled a short biography of Dimitar and Konstantin Miladinov, which he failed to publish.

At first K. Miladinov studied with his brother D. Miladinov while he was a teacher in Ohrid (1837–1839) and in Kukush (1840–1842), then continued his education at the secondary school in Ioannina (1844–1847). For short he was a teacher in the village of Tarnovo, Bitola District (1847–1849). He enrolled at the University of Athens and graduated with a degree in Greek Philology (1849–1852). There are reports that he visited the Zograf Monastery of Mt Athos and there he met monk Parteniy Zografski, who had also studied under D. Miladinov in Ohrid, but had later become a monk. He introduced K. Miladinov to the Church Slavonic language and nurtured his interest in the Slavic basis of the language. For a while he was a teacher in the village of Magarevo, Bitola District.

In 1856, K. Miladinov left for Odessa. In the same year, he met Alexander V. Rachinsky and they made friends. He assisted Miladinov to visit Kiev and Smolensk, and together with another Bulgarian, Vasil Bonev, invited them repeatedly for several months in the summer to his Sokolniki estate in the village of Minino, Saratov Governorate. K. Miladinov enrolled as a listener at the Faculty of History and Philology of Moscow University (1857–1860). In the midst of Bulgarian youth, he formed closer contacts with Lyuben Karavelov, Nesho Bonchev, Rayko Zhinzifov, Vasil Popovich and others. K. Miladinov, together with them all, and with H. Daskalov, K. Gerov and others, was among the founders of the Moscow Bulgarian Brotherhood Labour Company. In the 1970’s, Russian researcher L. I. Rovnyakova discovered at the State History Museum (Moscow) the original of the Programme of the Moscow Bulgarian Group. It bore the title Note of the members of the Moscow Bulgarian Company about its establishment and purposes. Based on a newly discovered report on the financial affairs of the Moscow Bulgarian Company of December 30, 1857, kept in the archives of M. P. Pogodin, Lilyana Minkova suggested that this has been the year of the formation of the Company. Their tasks included to familiarize the Russian society with Bulgarian literature, to attract Bulgarian young people to study in Moscow, to contribute to the development and enrichment of Bulgarian literature with new original translation works, to mention but a few. Bratski trud magazine began its life as an organ of the Moscow Bulgarian Company, its motto being ‘Remember Father’s Fireplace. Do not despise old customs.’ In total, four issues of the magazine were published and K. Miladinov, N. Bonchev, R. Zhinzifov, L. Karavelov, G. Teoharov, V. Popovich and others published their works therein. On the pages of the magazine appeared K. Miladinov’s article Охридската архиепископия [The Archbishopric of Ohrid]. Professor Osip M. Bodiansky, prominent Slavicist and teacher of the Bulgarians at the Faculty of History and Philology, published a folk song in the Russkaya beseda magazine, given to him by K. Miladinov. Around this time K. Miladinov published not a few poems in Bulgarski knizhitsi magazine (1858–1860), in G. Rakovski’s Dunavski lebed newspaper (1860) and in Bratski trud magazine (1860).

It was A. Rachinsky who instructed K. Miladinov to translate a part of Ivan Frelov’s book О православных церковных братствах, противоборствовавших унии в Юго-Западной России в XVI, XVII и XVIII столетиях [On Orthodox Church Brotherhoods Confronting Unions in Southwestern Russia in the 16th, 17th and 18th centuries]. Frelov’s work was published in 1857 in St Petersburg in a 200-page volume. The Bulgarian translation appeared in Moscow in 1858 published by the University Printing House, in a 40-page volume. Apparently K. Miladinov was instructed to translate the introduction of the book and some parts of other chapters, the purpose being to acquaint Bulgarian readers with the danger of eventual adoption of the union.

Konstantin Miladinov was among the most educated Bulgarians of the second half of the 19th century. He was a publicist, translator, folklorist with rich philological knowledge, but above all he was a talented poet. His poems are a model for nostalgic longing for his native land and occupy a prominent place in the history of Bulgarian literature. In issue No 20 of Dunavski lebed magazine (1861, I, February 7), two of his poems appeared, that had become classics, Тъга за юг [Longing for the South] and На чужина [Being in a foreign country]. With them K. Miladinov introduced in Bulgarian poetry the motive of sadness because of the separation from his native land, the feeling of isolation and foreignness in this ‘foreign land’, the bitter fate of an emigrant. Among his poems, Голапче [Birdie], Бисера [Pearl], Желание [Desire] (Български книжици, 1858, кн. I), На санцето [In the Sun] (Братски труд, 1860, кн. I), Гърк и българин [Greek and Bulgarian], Сираче [Orphan] were the most popular ones.

The cultural feat of Dimitar and Konstantin Miladinov was the preparation and publication of the collection Български народни песни [Bulgarian Folk Songs] in 1861. In addition to poetic and journalistic produce, K. Miladinov worked on the folk songs collected from his native country by his brother, Dimitar Miladinov, as well as records of songs provided to him by the Bulgarians in Moscow. When the collection of Bulgarian folk songs was ready, K. Miladinov sent a letter to G. S. Rakovski asking him to publish an announcement [Oglas] in the Dunavski lebed newspaper about the publication of the collection. In the letter he noted: ‘I think the songs should be distributed to a lot of Bulgarians and that is why I have set the price low’. The price announced in the newspaper was ‘in Turkish Grosh it is twenty, or one Ruble’. In the published Oglas (Дунавски лебед, 1861, г. I, бр. 20), K. Miladinov noted: ‘The songs we have started collecting from all parts of Western Bulgaria, i.e. from Macedonia…; also from Eastern Bulgaria’. He appealed to the contributors to send the funds and their ‘fair names’ for the collection to be printed. In the 1970’s, L. Rovnyakova reported that there was a small collection of folk songs in the archives of Izmail Sreznevsky – a total of 14 songs, two of which were translated into Russian, and 215 explanatory notes were given to eight of the songs. L. Minkova published this manuscript and commented on its story in the preface. As she maintained, the translation into Russian of the two songs and the translation of the notes were made jointly by K. Miladinov and A. V. Rachinsky, as the manuscript was prepared by the two for reporting at the St Petersburg Archaeological Society, as was confirmed by the preserved records. Obviously, among the many goals and intentions of K. Miladinov, especially to acquaint Russian scholars with Bulgarian folklore, there was also the hope to assist in their publication, but it is known that Russian scholars did not support the idea that the collection of Bulgarian folk songs should be printed in Russia.

In the early spring of 1861, Konstantin Miladinov left Russia and met in Vienna with Croatian Bishop Josip Strossmayer, who had repeatedly assisted the Bulgarians. A later meeting of Ivan D. Shishmanov with Bishop J. Strossmayer shed more light on the history of the publication of the collection of Bulgarian Folk Songs. K. Miladinov remained at Dyakovo, the estate of Strossmayer, and managed to prepare the collection for publication. With the material help and generous support of the bishop, the Български народни песни. Собрани от братя Миладиновци, Димитрия и Константина и издани от Константина [Bulgarian Folk Songs collected by the Miladinov brothers, Dimitar and Konstantin, and published by Konstantin] was published in Zagreb in 1861. The book has two dedications to Bishop Strossmayer – the first is from the publisher, and the second is a personal dedication by Konstantin Miladinov.

Konstantin Miladinov’s short life ended tragically. On returning to his homeland, he learned that his elder brother, Dimitar Miladinov, after an altercation with the Bishop of Ohrid, was arrested in Constantinople, and he immediately left for the city. In Constantinople, he too was arrested and imprisoned. The two brothers, Dimitar and Konstantin Miladinov, died in the dungeon in Constantinople – according to some biographers, of typhoid fever, and as legend has it, they were poisoned by the Phanariotes.

View the embedded image gallery online at:
https://sesdiva.eu/en/virtual-rooms/national-revival-of-slavs/item/138-konstantin-hristov-miladinov-en#sigProId784a1c8041
back to top